Milling began in the area now called Westmount in 1792 when John Countryman built a saw mill on the west bank of the Humber River in Etobicoke. His mill burned down in 1794, but Joseph Holley rebuilt it and added a grist mill in 1800. In 1814, Holley sold his mills to James Farr, who then sold them in 1828 to Charles and William Wadsworth, brothers from England.

​The Wadsworth family would go on to operate highly successful mills on the Etobicoke side of the Humber River for the next 87 years. Their mills, along with those of other millers on the east (Weston) side of the river, made that whole area a major milling centre in Upper Canada. 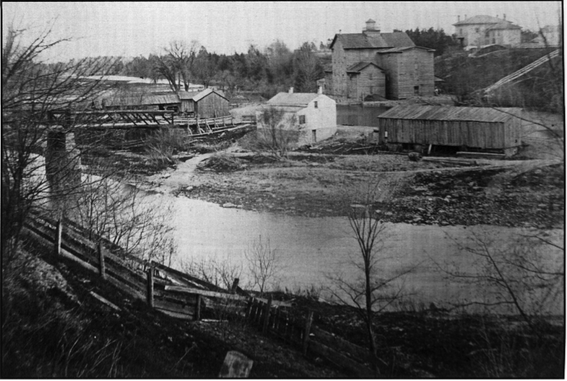 Photo of Wadsworth Mills ca. 1870, looking southwest. Large building is the grist mill; low building on the right is the saw mill; at the highest point is the Wadsworth family home “Pine Hills”; and the wooden bridge crossing the Humber River was built by the Wadsworths. (Source: Randall Reid)
Today Westmount includes the area from the CNR tracks to Leggette Av., and from the Humber River to Royal York Rd. In 1913, a concrete bridge was built across the Humber River to replace the wooden one built by the Wadsworths. Occasionally the north part of the area is referred to as “Humber Heights”, a reference to a school on Lawrence Av. that existed from 1921 to 1981. Despite its fine architecture and community appeals to retain the school, it was demolished except for the front façade. The site now houses facilities for seniors. 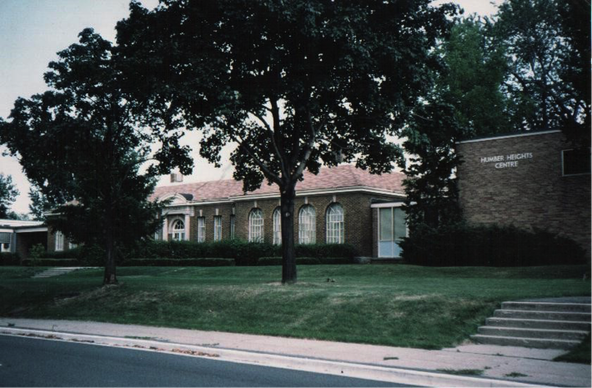 Photo of Humber Heights Consolidated School just prior to its demolition in the 1990s. A portion with arches was retained in the seniors residence that replaced the school.
St. Philip’s Anglican Church in Westmount had the second church congregation founded in Etobicoke. Sixteen families attended the first service in 1824. The first rector was the Rev. Dr. Thomas Phillips who served until his death in 1849. During his tenure, he performed over 3,000 baptisms, marriages and burials. St. Phillip’s Road is named for him and so is spelled with a double L, whereas the Church is named for St. Philip and is spelled with a single L.

In 1888, a house across the road from the church caught fire when an oil lamp exploded. Embers quickly reached the bell tower and the church was destroyed except for its brand-new organ which they were able to rescue.  For six year, services were held in a chapel in Weston. St. Philips supporters finally rebuilt their church and it reopened in 1894.

​The cemetery at St. Philip’s also has stories to tell. The earliest burial is “Isabella… in 1828, aged 53.” There is a memorial to Dr. William Thistle after whom Thistletown is named. The many markers found between 1835 and 1842 are heartbreaking evidence of the diphtheria and smallpox epidemics that caused so much death during those years. In 1993, the central corridor of the cemetery was transformed with pathways that meander through this historic site.

The Weston Golf and Country Club was formed with 60 men and 20 women in 1914. The club soon bought 160 acres of former Wadsworth property. The beautiful house that had been the family’s home was called “Pine Hills” and became the golf club house in 1921. It was demolished in 1965 to build a larger clubhouse. 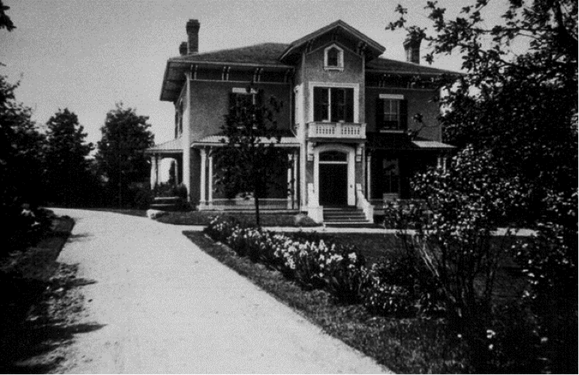 The Wadsworth’s family home “Pine Hills”, on St. Phillips Rd., later used a golf clubhouse.
The community of Westmount began to develop at a greater pace after World War II. Soon residents were asking for a replacement for an older bridge over the river to Weston.  This bridge was finally replaced in 1950 by a sturdier one with concrete abutments and wire cables supporting the platform.  This second bridge was washed out in Hurricane Hazel on October 15, 1954 with disastrous results.  During the storm, the massive flow of water down the Humber River caused the west abutment to tear loose while the east one held, as did the wire ropes supporting the platform. The current then shifted the bridge until it stopped at a point where all of the debris coming down the river built up in one location. The water was diverted in a tidal wave across Raymore Drive where 14 homes were lifted off their foundations and floated away. Thirty two lives were lost.  In 1995 the part of Raymore Drive that had washed away was turned into a public park with a unique memorial to the hurricane’s victims.

St. Matthias Anglican Church has existed at 691 Scarlett Road since 1922. However, the building is much older than that, having originally been built as the Holy Trinity Anglican Church in Malton. It was moved to Westmount in 1923 and settled on the southeast corner of Scarlett Road and Kingdom Street. In 2003, a Toronto by-law was passed to designate the church for its cultural heritage value.  However, in 2010, a new owner - the Sukyo Mahikari Centre - applied to have the building demolished and replaced by a larger structure.

St. Matthias is a rare example of a late 19th century Victorian Gothic frame country church and the only designated church in Etobicoke. It features a multi-sided apse at its east end, a steeply-pitched cross-gable roof with a bell cote, and gothic-style pointed-arch windows containing stained glass.  Following Hurricane Hazel in 1954, the church became the heart of community relief efforts.  The most devastating damage from the rushing torrent of the Humber River occurred in Westmount.  Toronto newspapers described the work of St. Matthias as follows: “A small, white frame church (provided) non-stop service of mercy ... capacity 88 churchgoers --the parson, Reverend Paul Glover, 24, wearing mud-stained jeans and jacket -- administered to the urgent needs of the flood-devastated area of Westmount flats.”  The pews were piled high with clothing, blankets, food and other life necessities brought by neighbouring families, and the church was billed as “a haven for the homeless”.

​About 40% of St. Matthias’ members lost their lives during this disaster. In 1957, the church moved to a larger location on Royal York Road and, in 1959, the little frame church was sold to the Christadelphian Congregation, who occupied it for almost half a century.  It became the Sukyo Mahikari Centre in 2009. These new owners were very cooperative and worked with a heritage consultant and the City to develop a mutually acceptable agreement to preserve this beautiful little church that will remain a landmark in the Westmount community for many years to come. The owners earned an Award of Merit from Heritage Toronto for their restoration. 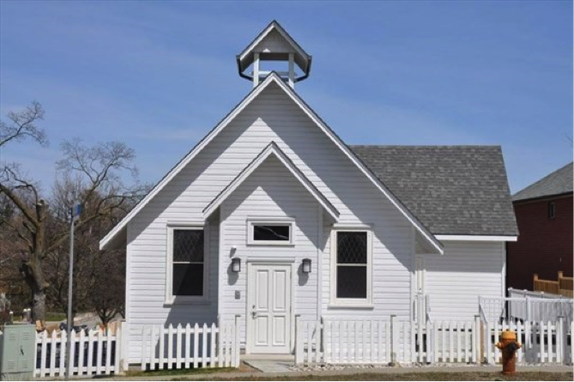 A restored Sukyo Mahikari Centre in 2017.
​Like many areas of Etobicoke after World War II, historic homes were often demolished and replaced by more modern houses in large subdivisions. Westmount was no exception, but some heritage properties have been maintained by their owners over the years. The following are three examples of heritage properties that have been lovingly preserved by their owners. 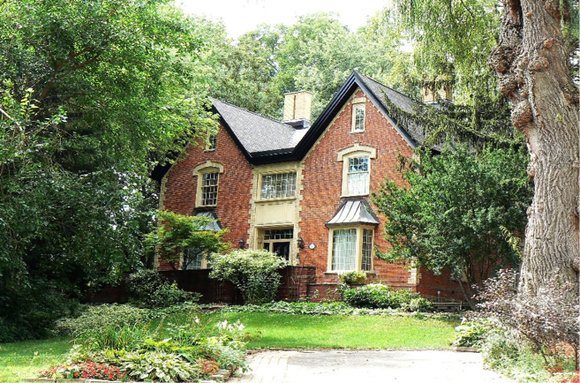 John and Louise Harrison House, 11 Yorkleigh Avenue, built 1867
Rev. William Johnson, rector of St. Philip’s Anglican Church in Westmount, built this house as a gift to his widowed daughter, Laura Louise, on the occasion of her marriage to John Harrison. 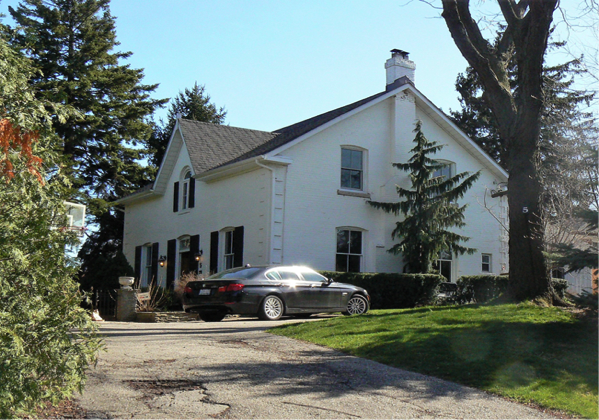 Mary Cunningham House, 5 Hill Garden Road, built in the 1860s
Mary was a widow with one son, William, when she bought land and had this house built in the 1860s. The classic lines found in this time period can be seen in the house’s peaked centre gable, its boxed cornice returns, and the decorative brick quoins on each corner. Mrs. Cunningham was a piano teacher and the doorways were extra wide to allow her piano to be moved from room to room. Her son never married and farmed the property. 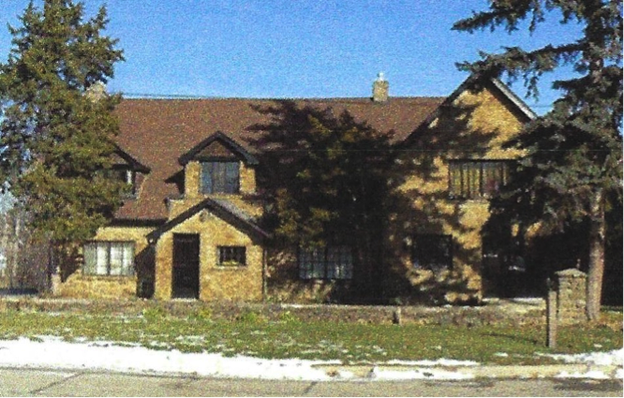 “Greystones”, Home of Arthur & Margaret Crumpton, built 1925
The Crumptons moved from Montreal to Westmount when Arthur transferred to work for the CNR as a construction engineer. They built their new house high over the Humber River on land once owned by the Wadsworths. Arthur had a perfect view of the CNR trains as they crossed the high bridge over the river. Margaret surrounded the house with her beautiful rose gardens.
Researched and Written by Denise Harris
Learn About More Neighborhoods