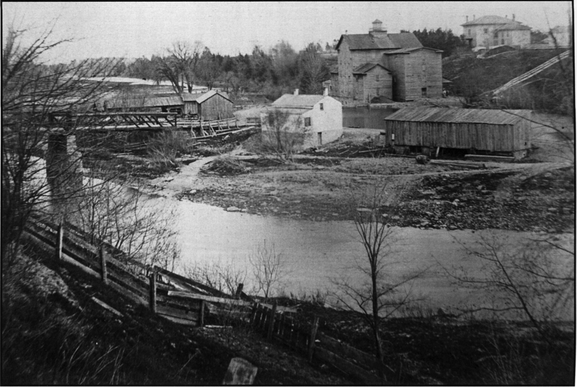 The Wadsworth Mills on the Humber River at Weston, looking southwest from the east side of the river, ca.1870. The road through the mill property and the bridge on the left over the Humber River became St. Phillips Road. On the top of the hill on the right is the Wadsworth house, “Pine Hills”. [Courtesy: A.J. Randall Reid]
The community of Weston exists because of a fluke of geography that created a vertical drop in the Humber River of 20 feet in just over a mile. The water power that this drop could produce quickly led to to development of Weston as a major early milling centre in Upper Canada.

Milling began in Weston in 1792 when John Countryman built a saw mill on the west bank of the Humber in Etobicoke. His mill burned down in 1794, but Joseph Holley rebuilt it and added a grist mill in 1800. In 1814, Holley sold his mills to James Farr, who then sold them to Charles and William Wadsworth, brothers from England, in 1828. The Wadsworth family would operate mills on that site for the next 87 years.

In 1830 the Wadsworths enlarged their grist mill and constructed a saw mill north of it. They also built a 14 room house on the north side of St. Phillips Road,  overlooking the Humber River. They named their home “Pine Hills” and surrounded it with beautiful gardens. A whiskey  distillery was opened, and the leftover mash fed 100 head of cattle and several hundred pigs on the Wadsworths’ 200 acre Etobicoke farm. In 1856 the they built the new modern grist mill that you see in the photo.  It was six storeys tall, with eight run of stones imported from France. This mill operated 24 hours a day, year round, producing 150 barrels of flour daily.

However, Charles may have extended himself too far because in 1916, his entire estate was being offered for sale at public auction under a power of sale. Charles moved to Barrie and lived with one of his sons until his death in 1933. In 1918 the flour mill was demolished and the lumber was used to build houses in Toronto. In 1920, Weston Golf Club bought 300 acres of the Wadsworth land to lay out a new golf course and they turned the Wadsworth home into their clubhouse. When the Golf Club demolished the house in 1967 and replaced it with a new clubhouse, the last trace of the Wadsworth milling empire in Weston disappeared.