Thistletown began over 200 years ago as a small crossroads community named Conat's Corners after its first settler.  It was a drovers' stop at the Albion and Islington intersection and easily accessible from the villages of Weston, Bolton and Woodbridge.  By the 1840s, it had three hotels, a blacksmith, a wagon works and a brick kiln which catered to the drovers as they arrived over the dusty roads in summer and the mud in spring and fall.

In 1833, John Grubb arrived from Scotland and settled here, purchasing first 100 acres on the north side of the West Humber River and then 50 acres on the south side of the river.  In 1845-46 he purchased Lot 33 of Concessions A & B and hired a local surveyor to prepare a plan of subdivision for a village to be named St. Andrews after his home in Scotland.  He had the plan registered on June 11, 1847 - the first plan ever registered in Etobicoke.  The post office asked the village to change its name as it was a duplicate, and the residents chose to name the village Thistletown in honour of their local doctor, William Thistle. 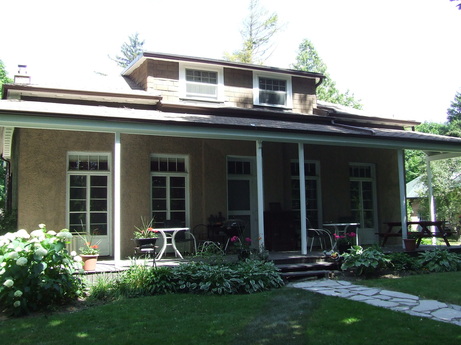 Elm Bank, as seen today.
as pre-1820 based onJohn Grubb’s original homestead, Elm Bank, still stands today and is currently owned by his great-great-great grandson.  It consists of two separate houses, both of which have been designated with a by-law as a heritage properties. The smaller home at 23 Jason Rd. was built of ledge stone from the Humber River between 1802 and 1820, and is a two storey home with one main fireplace.  It is typical of an early Ontario style house.  The property had eight owners prior to being purchased by John Grubb so it is unknown who actually built the house, but it has been dated as pre-1820 from its architecture and construction methods.  In 1835 John Grubb built the larger house at 19 Jason Rd., 20 feet south of No. 23.  This house is also built from ledge stone and is a rare surviving example of a Regency cottage.  The house has four major rooms, each one with its own fireplace.  One unusual feature is a door located in the dining room which, when opened, reveals the outer wall.  There is no indication from the outside that a door is located there since the original stonework is undisturbed.

In 1846, John Grubb and other prominent members of the community founded the Albion Plank Road Co. which built an 18 mile plank road from Weston to Bolton.  The cost of this road averaged over $1,000 per mile, even allowing for the low cost of supplies and wages at the time.  The cost of maintaining the road was paid by tolls charged to travelers, but this was not enough to cover the expenses.  After 1852, when the railroads were built through Weston, the additional competition and the increasing cost of repairs led the directors to gradually change the road over to a gravel surface.  In the 1920’s when Albion Rd. was paved,  many of the old planks were unearthed. 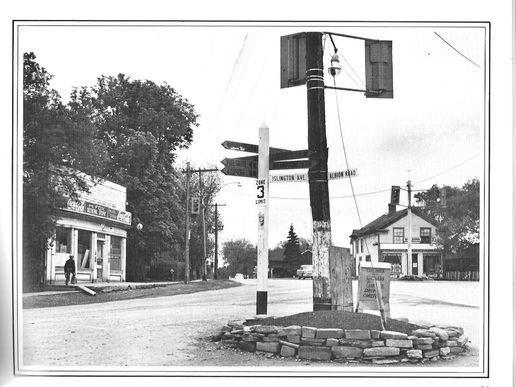 Intersection of Albion Road and Islington Avenue in 1957, looking southeast down Albion Road.
In 1896, two acres of land were donated to the village by Jonathon and Sarah Farr to be held “in trust for use as a public park for the people of the village of Thistletown and vicinity.”  The Village Green became the first public park in Etobicoke, although because it is located directly behind the school, many people believe it to be a schoolyard.  A one frame school house was built on the east side of Islington Av., just south of Albion Rd. in 1874, but was moved in 1901 to the east side of the Village Green.  Over the last century the school was expanded to reflect the growth in the village.  In 1985 the school was closed and re-opened as the Thistletown Multi-Service Centre.  The building now houses a daycare, a seniors centre, and Parks and Recreation programs, as well as a number of community agencies.  Located on the third floor of the building is a historical photo gallery of Thistletown’s past.

In 1910, the Toronto Suburban Electric Railway extended a line from Weston, through Thistletown and up to Woodbridge.  This speeded up growth of the village and summer cottages soon sprang up among the permanent homes since salmon fishing and swimming in the deep holes of the Humber River were good.  Many of those cottages are still there today, although over the last decade they have become victims to developers who tear them down and replace them with large homes.  In 1926 the electric railway station was closed due to the rising popularity of the automobile.

On June 17, 1933, Thistletown became a police village with its own board of trustees which had the power to collect taxes for certain aspects of village services, such as installing street lights, building sidewalks, and collecting garbage.  This had the potential to be the first step in becoming an independent village, and with further growth, a town.  With the growth across the entire township of Etobicoke, this was no longer feasible so the trustees applied to have the police village dissolved on November 9, 1961.  Thistletown was the only police village in the Metro Toronto area at that time.

Thistletown is home to the Franklin Carmichael Art Centre which holds many art programs for all ages.  Aside from quite a few listed heritage homes, Thistletown also has the last privately owned working farm in Toronto: Anga’s Farm & Nursery on Bankfield Dr.  Thistletown has an active business association in the Albion Islington Square BIA which holds a street festival every year.  Also, every year a walking tour of Thistletown is held through Heritage Toronto.

Researched and Written by Joanna Twitchin
Learn About More Neighborhoods