The former St. Matthias Anglican Church at 691 Scarlett Road, in the Etobicoke community of Westmount, has stood at this location since 1922.  But the building itself is much older, having been originally constructed as the Holy Trinity Anglican Church in Malton in 1895.  By 1909 this short-lived congregation had folded.  In 1923, St. Philip’s Anglican Church in Etobicoke decided to open a mission of their church in the growing Westmount area.  They purchased a lot on the southeast corner of Scarlett Road and Kingdom Street, and moved the vacant Malton church building to this lot, renaming the church St. Matthias.

In 2003, a city by-law was passed to designate this little church as having cultural heritage value under the Ontario Heritage Act.  However, in 2010, this protection appeared to be threatened when the current owners, the Sukyo Mahikara Religious Organization of Canada, applied to have the building demolished and replaced by a larger structure. In an environment when most historians feel they are fighting an up-hill battle to protect heritage properties, the positive outcome of this case will ensure that the building is preserved, while still allowing the owners to perform a needed expansion. 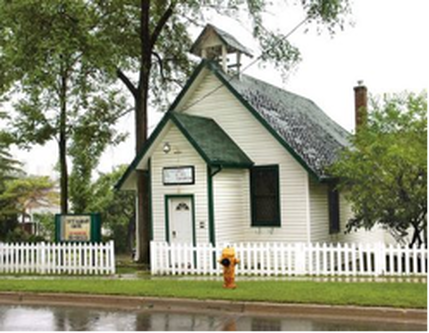 Exterior of former St. Matthias Anglican Church (Source: Ian Kelso, Inside Toronto)
St. Matthias is a rare example of a late 19th century Victorian Gothic frame country church and the only designated church in Etobicoke. It features a multi-sided apse at its east end, a steeply-pitched cross-gable roof with a bell cote, and gothic-style pointed-arch windows containing stained glass.

Following Hurricane Hazel in 1954, the church became the heart of community relief efforts.  The most devastating damage from the rushing torrent of the Humber River occurred on Raymore Drive in Westmount where 14 houses were swept away and 36 people died.  Toronto newspapers described the work of St. Matthias as follows:

“A small, white frame church (provided) non-stop service of mercy ... St. Matthias Anglican, capacity 88 churchgoers -- and the parson, Reverend Paul Glover, 24, wearing mud-stained jeans and jacket -- administered to the urgent needs of the flood-devastated area of the Westmount flats.”  The pews were piled high with clothing, blankets, food and other life necessities brought by neighbouring families, and the church was billed as “a haven for the homeless”.

About one-third of St. Matthias’ members lost their lives during this disaster, yet church membership increased afterwards as a result of the attention they had received.  In 1957, the church moved to a larger location on Royal York Road, north of Eglinton, where it still is today.  In 1959, the little frame church building at 691 Scarlett Road was sold to the Christadelphian Congregation, who occupied it for almost half a century.  After changing hands twice more, it became the Sukyo Mahikari Centre in 2009.

On June 22, 2010, the Etobicoke/York Community Council voted unanimously to refuse the demolition application, but “without prejudice”, meaning the applicant could reapply later.  However, Council encouraged the applicant to hold a community information meeting and to explore options that would save the building.

The owners were very cooperative and took Council’s advice.  After holding a community information meeting, they worked with a heritage consultant and with the City’s Heritage Preservation Services (HPS) to develop a mutually acceptable agreement that would preserve the building.  As a result, the owners will not be resubmitting a demolition application.  Instead they will be: stabilizing the structure; extending the basement and south wing to gain more space; removing the vinyl siding and reclading the building in wood (the original material); and restoring the bell cote.  The south and north walls will be modified to let in more light, an important change for the Sukyo Mahikari Centre.  Mahikari means “true light”, and their members believe that light energy purifies the spiritual aspect of all things.

The building’s owners, the Community Council and HPS are to be congratulated for a positive outcome.   This beautiful little church will remain a landmark in the Westmount community for many years to come.