In 1840 William Pearce Howland leased Coopers Mills. In 1845 he built a large three-storey mill on the south side of Dundas and named it Lambton Mills after George Lambton, Earl of Durham, whose Durham Report Howland much admired. Howland later became a Father of Confederation, an MPP and Lieutenant Governor of Ontario. He was joined by his brothers Peleg and Frederick, and they operated a general store across from the mill and built a large home behind the store. The west bank of the river was then known as Milton Mills, a name favoured by William Gamble who had a mill by that name at Bloor St. and a store at Dundas St. 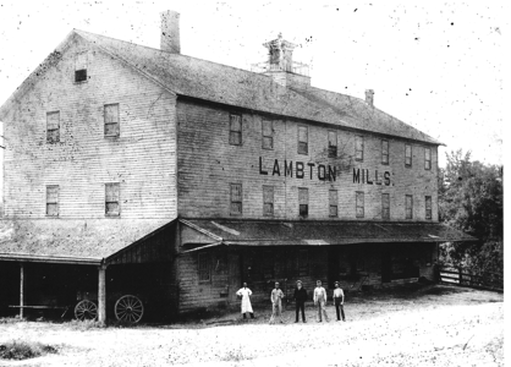 Howland’s Lambton Mills
​Another important mill on the Etobicoke side of the Humber River was Millwood, built by Thomas Fisher south of Dundas Street in 1834. His large new home was built on what is now Kingsway Crescent, overlooked his two-storey grist mill. After a fire in the mill in 1847, Fisher rebuilt the mill as five storeys. He died in 1874, and after his son died four years later, that was the end of water-powered mills in Lambton Mills.
​
However, in 1880, George and Mary Smith turned Fisher’s old mill into a textile producer by installing a 150 hp steam engine. After five years, financial problems forced the mill to close. Another group eventually took over the mill and formed Canada Woolen Mills Ltd., specializing in rope making. When this mill burned down in 1901, that was the end of all milling in Lambton Mills. 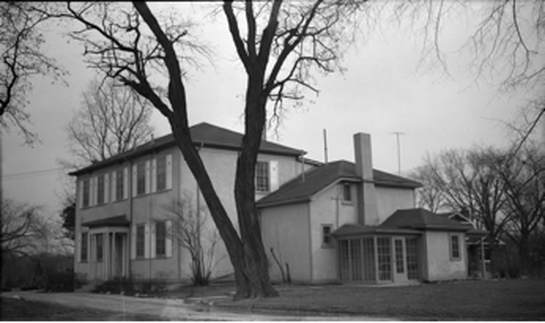 “Millwood” house in 1953 on Kingsway Crescent at Woodhaven Heights
Thomas Fisher’s house “Millwood” stood on Kingsway Crescent until the 1960s when his great grandson, Sidney Fisher, had the home carefully demolished and stored, but unfortunately it was never rebuilt. Instead, Sidney and Charles Fisher donated the “Thomas Fisher Rare Book Library” to the University of Toronto in 1973 in honour of their great-grandfather.

In 1832, the “Etobicoke” post office opened to serve the entire township in a store on the north side of Dundas, just west of the Humber River. Truman Wilcox from Islington was its first postmaster. In 1840, the post office name was changed to “Lambton Mills” to serve the communities on both sides of the Humber River. After that, Lambton Mills became the name used for the villages on both sides of the river. 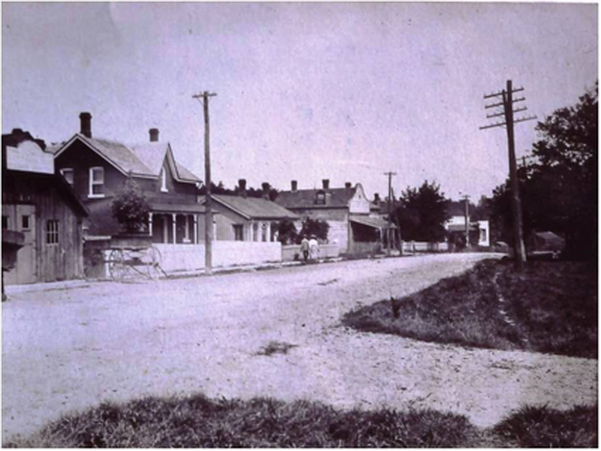 Dundas Street looking east from today’s Earlington Av. Ca. 1910
The above tranquil view of Dundas Street ca. 1910 provides a sharp contrast to the Dundas Street we know today. Not a single vehicle disturbs the peace for the lone couple strolling eastbound in the centre of the photo. You can see Dundas Street curving towards the south as it starts its descend to the low-level bridge that crossed the Humber River.  In 1929, that bridge was replaced by the high-level bridge on Dundas that we use today. In 1910, the population of Lambton Mills was about 600. It had four churches, four stores, two hotels, two blacksmiths, one carriage factory, two telegraph offices and two express offices. Left to right, the buildings in the photo are: George Chapman’s blacksmith shop; Thomas Colton’s residence; Charles Ware’s residence; Charles Ware’s general store; and Thomas Colton’s blacksmith shop. All of these buildings are gone except Colton’s house at 4146 Dundas Street West which is listed on the City of Toronto’s Heritage Register.

The first school in Lambton Mills was built on the north side of Dundas, just west of Royal York Road.  When the Credit Valley Railway was being put through, the school had to be moved and a new school was erected in 1875 at Prince Edward Dr. and Government Rd., designed and built by local resident, Meade Creech. Though it has seen many additions over the years, Lambton Kingsway Junior Public School stands on the same property today. 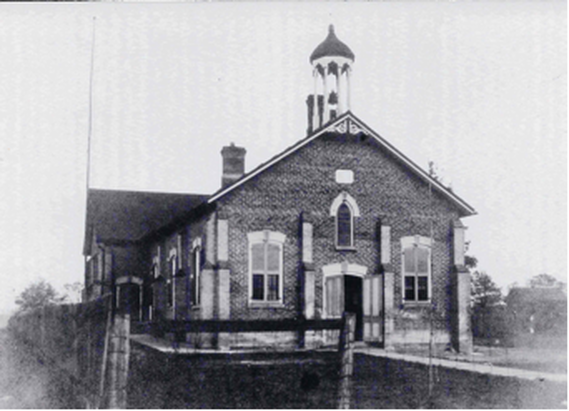 Lambton Mills 1875 School (demolished)
Meade Creech decided early on that he wanted to be a builder and he was self-taught. His first major commission in 1870 was building a school in Eatonville, followed by the school in Lambton Mills. In 1877 he built the new Lambton Mills Methodist Church on Dundas St. In 1937, Lambton Mills United Church amalgamated with Kingsway United Church as the new Kingsway Lambton United Church in their new building on the northwest corner of Prince Edward Dr. and The Kingsway. 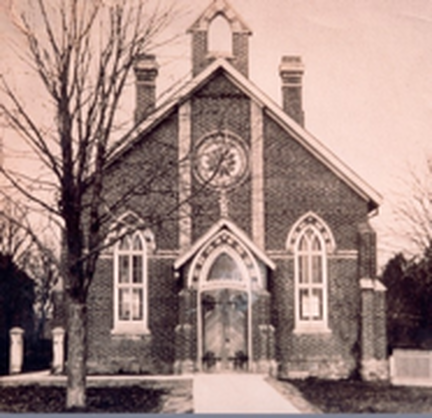 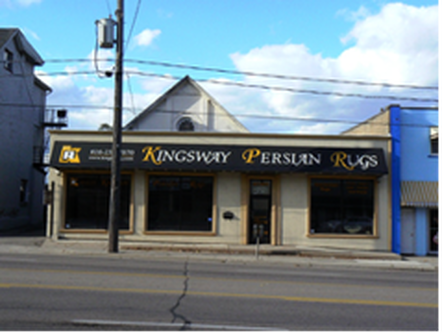 The rose window from the original church is barely visible in 2015, behind a 1954 retail addition.
Meade Creech also built many other buildings in Lambton Mills, the most memorable being a Masonic Temple and a new house for his family, both on Dundas St, and now demolished.
​
John Berry arrived in Lambton Mills in 1890 with his wife and her family and was the new proprietor of a wool manufactory on the west bank of the Humber River, south of Dundas.  His in-laws built a house in 1892 at what is now is 125 Kingsway Crescent. When the mill failed in 1894, Berry became superintendent of textile mills in Quebec and then New York. He and his family returned to Lambton Mills in 1914 and lived at 125 Kingsway Crescent. In 1918, Berry was hired as treasurer for the Township of Etobicoke. Because the township had little office space until 1922, Berry did all of his township work in a parlour on the main floor of his home. His granddaughter Isabel called him a true “English gentleman”.  He was known for his distinctive walrus-style moustache. In the summer he always wore a pansy in his lapel, picked from his garden. He walked to and from work in Islington every day, regardless of weather, and never owned a car. He was Etobicoke’s treasurer for 20 years, and retired in 1938 at the age of 80.  The house still stands today and is a listed heritage property. 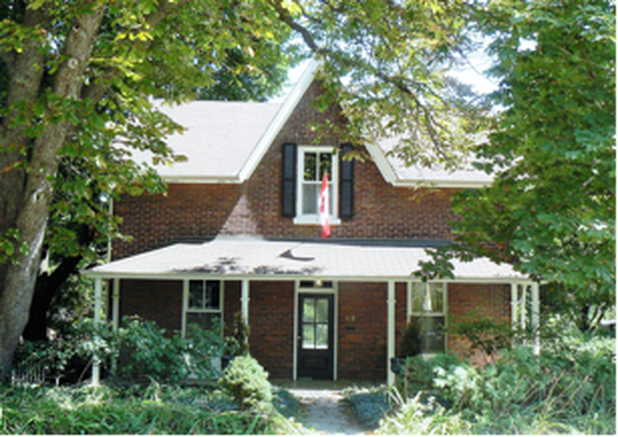 125 Kingsway Crescent in 2015.
A small stream flowed south of Lambton-Kingsway School into the Humber River. In 1907 Walter Page bought 10 acres of land there and founded the Ontario Paving Brick Co. Ltd. The area was a source of shale for bricks and sewer pipes until 1921. During World War I there was a rifle range on the property, and today it is the location of Lambton-Kingsway Park.

Although many of the old buildings along Dundas Street have been demolished and replaced by stores and condos, the area of Lambton Mills south of Dundas Street is a charming residential area. Many of the streets are narrow and winding, and many heritage homes and lovely gardens can be found there. The valley of the Humber River affords many opportunities for a stroll through Home Smith Park where remnants of Fisher’s Mill can still be found in the underbrush. The following are just a few of the many interesting and historic properties that have survived in Lambton Mills and make an area stroll worthwhile:


​Written and Researched by Denise Harris.