In 1793, the first Lieutenant Governor of Upper Canada, John Graves Simcoe, ordered the construction of a saw mill on the west bank of the Humber River, near today’s Old Mill Road.  Called the King’s Mill, it was Toronto’s first industrial building, providing lumber for ships and government buildings.
​
Devastating fires and floods destroyed a series of stone mills built on this site and operated by a series of lessees and owners.  The last mill was a grist mill erected in 1847 by William Gamble. In 1881, no longer in use as a mill, this building was also destroyed by fire.  However, this “Old Mill” remained a picturesque ruin by the Humber River for the next 120 years – the subject of many photographs and lending its name to community landmarks and streets. 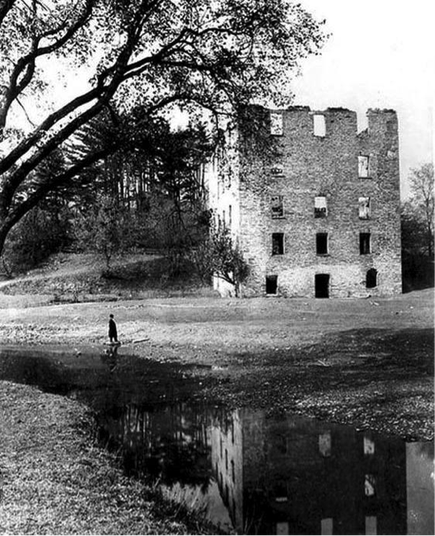 Old Mill Ruin ca. 1905 (Source: Montgomery’s Inn Museum)
The idea for creating residential developments along the Humber River came from Robert Home Smith, a brilliant and charismatic young man from Stratford, Ontario.  Born in 1877, he had studied law at Osgoode Hall, but illness-induced deafness prevented him from practicing this profession.  Instead, he entered business, working as a trustee officer in National Trust’s real estate department, which whetted his interest in land development.

From 1906 to 1912, Home Smith assembled 3,000 acres of land on both sides of the Humber River, between Eglinton Avenue and Lake Ontario.  In 1912 he presented his vision to the public by offering properties for sale in his “Humber Valley Surveys”, which consisted of five subdivisions called Riverside, Bridge End, Baby Point, The Old Mill and The Glebe.  The Glebe was later renamed Kingsway Park, and the area is known today simply as “The Kingsway.”

Home Smith marketed all of these properties with the motto, “Angliae pars Anglia procul” or “A bit of England far from England.”  Each lot purchaser was required to sign a covenant that remained attached to the property for 30 years, thereby ensuring that Home Smith’s high standards were maintained.  All homes had to be architect-designed, with the plans approved by one of Home Smith’s own architects. Tudor or English styles were preferred.  In addition, trees could not be removed without permission; there were to be no semi-detached or multiple dwellings; only stone, stucco or brick could be used on exterior walls; and no home-based businesses were permitted except doctors and dentists.

​The main road into the area was called simply “The Kingsway”, and it was the first subdivision road ever paved in Etobicoke. It had a width of 100 feet (vs. the standard 66 feet) because Home Smith had planned to build an electric railway down the centre of the street between Dundas and Bloor Streets, continuing south to Lake Ontario and on to downtown Toronto.  This plan never materialized. 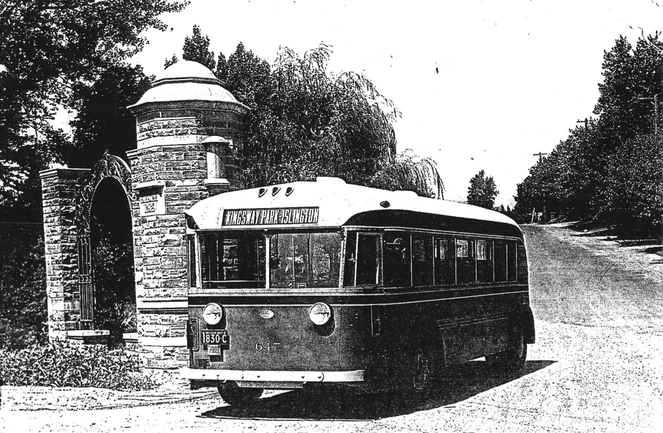 Kingsway Park Bus travelling down “The Kingsway” through the subdivision’s elegant entrance gates in 1937 (Source: Montgomery’s Inn Museum)
​World War I delayed Home Smith’s plans for Kingsway Park, and the first two houses were not built until 1924 at 43 and 47 The Kingsway for Edward J. Cousins and Edward L. Cousins, father and son, respectively.  The largest lots with beautiful views of the Humber River Valley sold first, and as a result the grandest homes in Kingsway Park were built prior to the 1929 stock market crash.  Recognizing the economic realities of the time, in 1930 Home Smith decreased lot sizes, thereby increasing by 40% the number of lots available.  Between 1924 and 1947, a total of 665 homes were built in Kingsway Park. 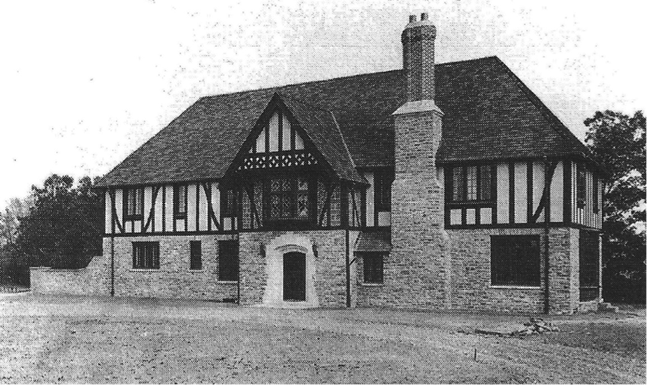 Home of Richard and Elsie Pearce at 35 Kingsway Crescent, built in 1935 and designed by a Home Smith and Company staff architect (Source: The Kingsway) 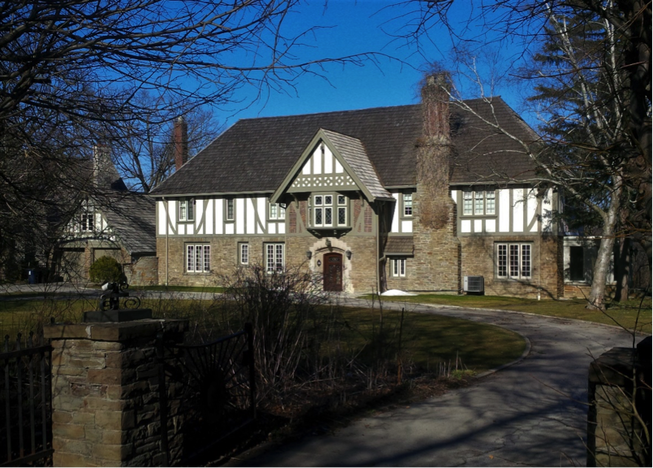 35 Kingsway Crescent in 2017 (Source: Denise Harris)
​To encourage sales, Home Smith often provided amenities in his subdivisions, such as a golf course and a riding stable. The first of these amenities was built in 1914 as the Old Mill Tearoom, adjacent to Gamble’s Old Mill ruin.  Many additions were made to this venue over the decades, all in the same Tudor Revival architectural style, making the Old Mill Restaurant and Tea Room one of the largest fine dining and event venues in Toronto.  The last expansion in 2001 added a 60 room boutique inn and spa.  Although the intention was to house the hotel inside the Old Mill ruin, plans changed when the ruin was found to not be structurally viable.  The Old Mill ruin was demolished, and its stones were used in the exterior walls of the new hotel.  The Old Mill celebrated its 100th anniversary in 2014. 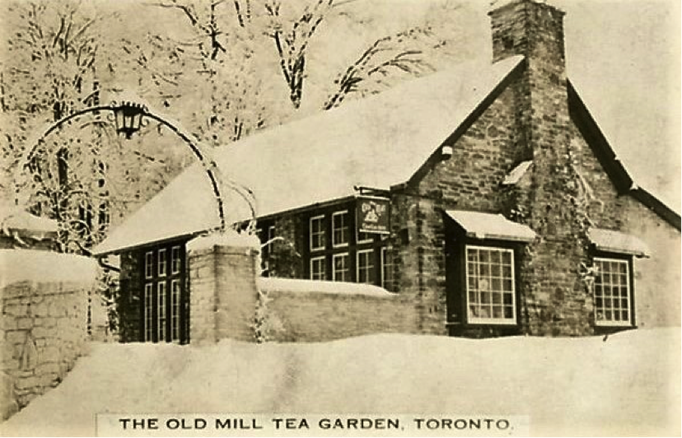 The Old Mill Tea Garden in 1914 (Source: Montgomery’s Inn Museum)
In the early 1930s, Home Smith set aside lots on the north side of Bloor Street between Prince Edward Drive and Montgomery Road as “Kingsway Park Business Sites” to provide shopping, banking and service facilities for local residents. These lots were zoned commercial, and strict rules outlined the types of businesses that could open there. Soon after, lots were also opened on the south side of Bloor.

​ In 1933, Carman Mainprize’s Drug Store was the first store to open, located on the northeast corner of Bloor and Grenview (moving to the northwest corner in 1939.)  Residents also picked up their mail at Mainprize’s until the late 1930s when door-to-door mail delivery was introduced. Reg Bailey opened a butcher shop near Grenview in 1934, and the Bank of Nova Scotia opened just west of Grenview in 1936. Kingsway Fruit Market opened in 1938.  On the south side of Bloor, there was a Cities Service Gas Station at Prince Edward, George Card Landscape opposite Grenview, and a Red Indian Service Station opposite Willingdon. Other early stores included Aristocrat Beauty Salon, Kingsway Millinery Shop, Bea-Birk’s Ladies Shoppe, Kingsway Toggery and Wool Shop, Martin’s Men’s Wear, and Silverbirch Pharmacy with a soda fountain. When The Kingsway Theatre opened in 1939, admission was 10¢ for children and 20¢ for adults to see films at this “modern picture palace.” Today when people use the term “The Kingsway”, they are often referring specifically to this retail strip along Bloor Street that still serves the local community. 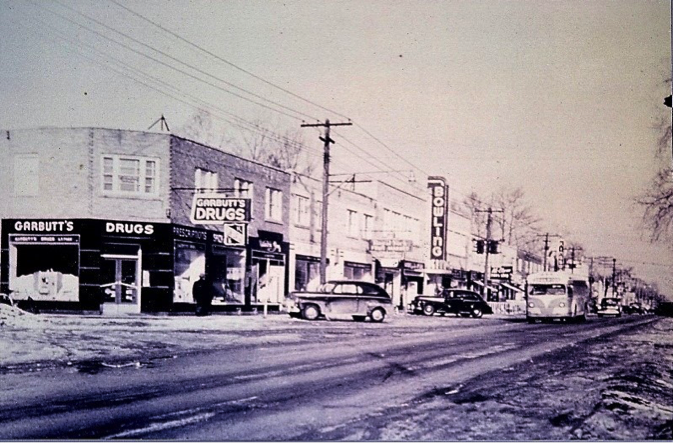 Northeast corner of Brentwood and Bloor in The Kingsway’s retail strip in the 1940s. (Source: Montgomery’s Inn Museum)
Researched and Written by Denise Harris
Learn About More Neighborhoods