In the village of Lambton Mills, the Wesleyan branch of Methodism found it effective to organize field meetings to uplift those within their congregation while also attracting the attention of potential new followers. These field meetings usually took place in the early morning, accompanied by lengthy exhortations. In larger gatherings, tents were set up to provide warmth. Over time, meetings became more orderly and were held indoors, often in people’s homes. The simple honesty of the preachers appealed to many early settlers.

Meetings for worship were soon led by Methodist Circuit Riders who each travelled about 300 miles in nine townships before starting all over again.  Down through the years, various branches of Methodism came and went, each requiring changes in appointments, leadership and preaching style.

In the early1840s, the Methodists in Lambton Mills decided it was time to build their first church. On October 24, 1844, local miller, Duncan Murchison, deeded a sixty-six foot square of land on the east side of Prince Edward Drive, north of Government Road, to the new trustees. The new church was made of wood and measured 20 by 30 feet. Opening services were held on February 9, 1845. 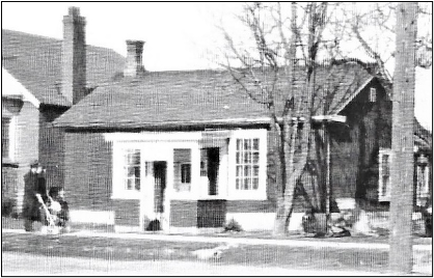 Lambton Mills first Methodist church.
There was no organ in the church at the beginning. Meade Creech loved music, led the church choir, and acted as church organist.  About 1864, he started to build an organ which took him two years to finish. It resided in the family home for awhile, and then it was moved into the church. However it was too heavy to use indoors and it was soon sold. Meade bought a melodeon  which the church used for many years.

Over time, standardized sermons took the place of evangelism. In the 1870s, the religious press was becoming critical of shabby churches and was praising larger ones of stone, brick and glass.  The Credit Valley Railway was built through Lambton Mills in 1874, encouraging broader ideas. It was agreed that the little white church of 1845 was stretched for space and soon parishioners were planning a new church to replace it.

In 1885 Methodists banded together to form the “Methodist Church of Canada”. At the end of March, a building site had been purchased from Charles and Elizabeth Ware, merchants on Dundas Street. The lot was located on the north side of Dundas, east of Prince Edward Drive.  Meade Creech had built a reputation as an excellent architect/builder and he was given the contract for the new church. His son Joseph assisted him. It was designed in a Gothic Revival style of red and yellow brick, with a rose window of glass. The sanctuary seated 150 people. The trustees arranged a $300 mortgage for two years. The old frame church was sold and used as a residence for over 100 years.

On opening day, Reverend Dr. Benoni Ives of Auburn, NY was invited to speak. Known as a gifted speaker, he proved it by convincing the congregation to discharge their entire mortgage on opening day. 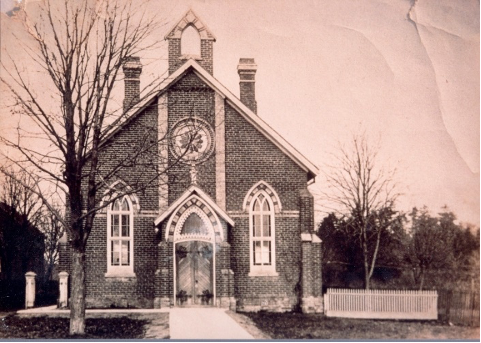 Lambton Mills Second Methodist Church.
In Canada, the Methodists amalgamated with Congregationalists and Presbyterians in 1925 to form the United Church of Canada.  In 1928, it was agreed that the church’s ministers would be provided with a church-owned house. A house was purchased on Prince Edward Drive and Rev. J. Albert Leece was chosen as the first onsite minister.

From the beginning, the church grew by leaps and bounds. Soon the congregation began to feel that their new Gothic church was already too small for their needs. Notably, it lacked sufficient space for Sunday School programs and for the music programs the members loved so much.

Soon the congregation began to plan for their third church. This time they were able to build a church that would serve both Lambton Mills and Kingsway Methodist Churches. A site was found on the northwest corner of Prince Edward Drive and The Kingsway.

In 1935, the newly formed Kingsway Lambton United Church moved into its new home where it still serves the community today.
In June of 1938, Bernard and Anna Pawlowski bought the former church building but only owned it for a few years. By 1950, a store front had been added to the old church, now labeled Dundas Upholstery. 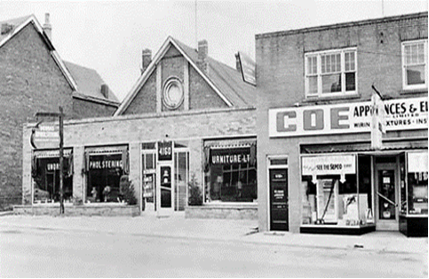 Lambton Mills Second Methodist Church after its conversion into a retail store in 1950.
Subsequent owners or renters were: Kingsway Studios; Interior Decorating; Christine’s Antiques; Trans-NorAm Marketing; and Tanis Productions Inc. There were two fires in the building in the 1960s. 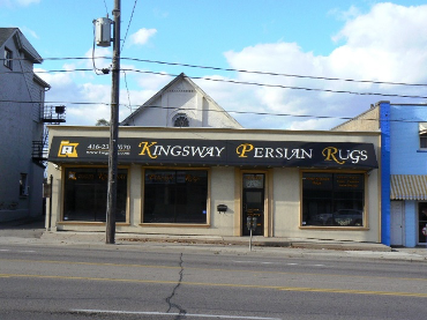 Former Lambton Mills Methodist Church with retail addition on the front in 2018.
The main floor is now occupied by Kingsway Persian Rugs. The former church no longer possessed any vestige of its former life on the main floor. However, in 2009 there was an artist’s studio on the second floor and the light flooding in through the rose glass window from the south was spectacular in the sunlight. The artist is no longer there, but you can still see the rose window if you stand on the south side of Dundas Street, facing north.