For years I drove down Burnhamthorpe Rd. every day on my way to work, oblivious to my neighbourhood’s past history. Not long ago I joined the EHS and started my research on notable people and events in Etobicoke. In the book Villages of Etobicoke, I came across a scant reference to black residents who lived in my Burnhamthorpe Rd. and Dundas St. W. area in the early 1800's. I was intrigued to discover that the locals called a section of this area “Darky Street”, a contemporary (now offensive) reference to black people.

Wanting to know more about Darky Street and black settlement in my area, my investigations led me to the story of Joshua Glover, a settler who once lived close by my home in the Lambton/Kingsway area and worked in Islington.

Joshua Glover was a slave who ran away from his owner in St. Louis, Missouri in the spring of 1852. On his way to freedom in Canada, he travelled four hundred miles, nights only, dodging slave hunters and ending up in Racine, Wisconsin by the summer. Racine was known as an anti-slavery town and he was able to find work at a sawmill. However, Glover tasted freedom for less than two years. On March 10, 1854, his owner tracked him down and took him off to jail in Milwaukee.

Anti-slavery citizens in both Racine and Milwaukee were galvanized into action. An angry crowd assembled outside the courthouse the next day. Men decided to take the law into their own hands. They battered down the jail house door and rescued Glover, an extraordinary event that highlighted the concern of many people about the injustice of slavery at that time.

Glover was guided along the “underground railway”, a series of safe houses around Wisconsin, until he was eventually able to take a ship to Canada in the spring of 1854.

Joshua landed in either Owen Sound or Collingwood, and soon made his way to Etobicoke where he found work with Thomas Montgomery, owner of Montgomery's Inn. He was not the only runaway slave to find refuge in the area. Glover became one of 39 blacks living in Etobicoke, out of a population of 2,900. He settled into a small house in Lambton Mills, rented from Mr. Montgomery. The house was on a property on Lot 10, Concession C, on the north side of Dundas Street, about half way between Earlington Avenue and Kingsway Crescent.

After all the hardships that he'd endured, Glover no doubt felt very relieved to have a job, shelter and freedom from the slave catchers. Slavery had been abolished in Canada about twenty years before he arrived. Although there was a law in effect to extradite fugitives charged with all manner of crimes by the U.S., this law left the judgment of each case up to the Canadian governors. Not seeing flight from slavery as a crime, the governors refused to return fugitive slaves. Indeed, by the time Glover arrived, slaves were not returned to the States even if they had been accused of other crimes while seeking their freedom.

Glover was free, but this is not to say that he wasn't a victim of discrimination in Etobicoke. Although there is no record of prejudice against him specifically, we do know that blacks were subject to prejudice in many parts of Canada. For example, in 1849 Chatham’s sheriff called a meeting to prevent blacks from owning land. Some white parents were removed their children from school when black children were enrolled.

For over twenty years Glover worked for Montgomery, cutting wood, harvesting crops and doing various other jobs around the farm. His wages and purchases are documented in Montgomery's still existing record books. It is evident from these records that Glover was not a stranger to hard work, performing strenuous labour into his sixties.

Recently I saw the movie Loving, which chronicles the struggle of an inter-racial couple to live a married life in the U.S. during the 1960's. They were barred from their home state for being married. Imagine my surprise when I learned that Glover married Ann, a white Irish woman, one hundred years earlier. Not only that, but it turns out that by 1871 there were three other blacks who married white Irish women and were living on Montgomery's land. We don't know what forms of discrimination they may have faced, but at least they weren't forced to leave the province!

Unfortunately, Ann Glover died about ten years after her marriage to Joshua. The cause of death was inflammation of the lungs from exposure during an accident. She was thirty-five. Ann is buried in the cemetery of St. George's Anglican Church on-the-Hill on Dundas St. W.

No doubt Ann's death affected the fifty-eight year old Glover greatly. From the records it is evident that he didn't work for a while. Eventually he resumed manual labour with his usual stamina. It seems that he didn't like being alone, however, since he married again, this time to another Irish woman, Mary Ann Wattes. The only record of this marriage is in Mary Ann's death record for 1881.

A remarkable detail about Glover's life in Etobicoke is the extent to which Thomas Montgomery's son, William, and other notable citizens came to his assistance in 1884 when he was accused of stabbing a white man. Glover (at age 70) was charged with wounding with intent. William Montgomery came to his assistance by arranging for his lawyer, who took on the case without charge. William visited Glover while he was in jail and bought some new clothes for him, presumably so he would look presentable in court. It seems that Montgomery may have gone further by getting a local shopkeeper and the reeve of Etobicoke, along with himself, to speak on Glover’s behalf during the trial. Each of them spoke at length of his good manners and character.

The result of the trial was that Glover was convicted of the lesser charge of wounding without intent and had to spend three months in jail. Despite his actions, Glover must have been looked upon fondly by the community to receive such a light sentence.

Four years after this incident, Joshua Glover appears to have been too old to support himself. Montgomery noted in his daybook that “Old Josh… went to the County House,” referring to the York County Home for the Aged in Newmarket. Glover died there in 1888 at the age of 74. Montgomery attempted to retrieve his body for burial, but due to a mix-up it was sent to the University of Toronto for medical research. Glover is now buried in Toronto's St. James Cemetery.

Citizens of Etobicoke and indeed Canada should be proud of the history of Joshua Glover. His story tells of the early ways in which Canadians offered a hand to oppressed refugees, which we continue to do today. It is also a story of how we accepted others, as we do now, on the basis of their humanity, and not on their colour or place of birth.

Researched and Written by Joel Winters 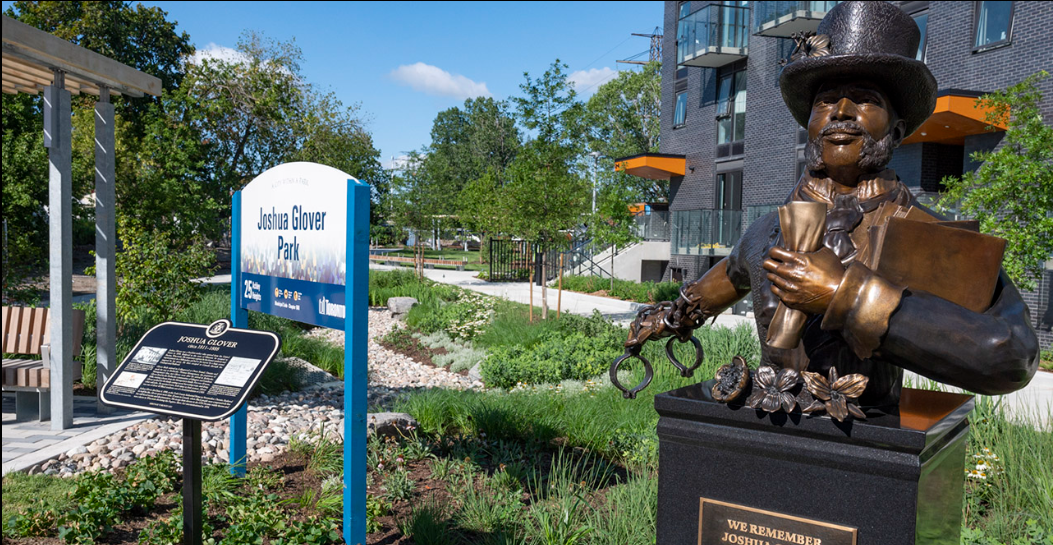