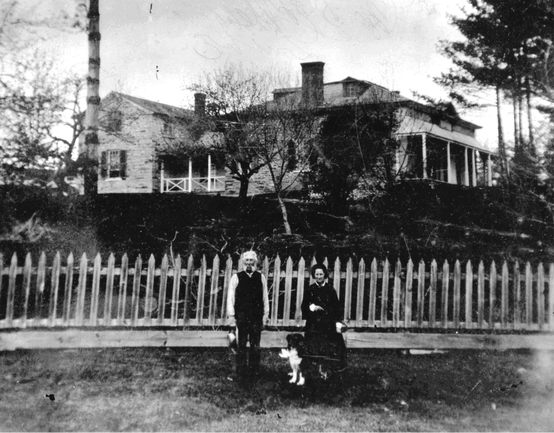 John and Janet Grubb’s son, William Grubb(e), and his wife Mary, standing southwest of the family homestead, “Elm Bank”, in Thistletown in the early 1880s (Courtesy: Michael FitzGerald)
There are many secret spots to be discovered in Northern Etobicoke, but one particularly special area is off the beaten path on Jason Road in Thistletown. A stroll along this quiet street - with its extensive woodland, abundant wildlife, and four amazing heritage buildings - is like stepping back in time to the early 19th century.

In 1833, John and Janet Grubb emigrated from Scotland with their nine children and bought 150 acres of farmland straddling the West Humber River just south of today’s Islington/Albion intersection. They called their farm “Elm Bank.”

The family moved into a small, two-storey house that already existed on the property. Its address is 23 Jason Road, and it is on the left in the above photo. Built ca. 1802-20 of Humber riverstone, it is the oldest building existing in Etobicoke and a unique example of vernacular architecture with its truncated windows, asymmetrical facade, varying floor levels, and rare basement well.

In 1834, Grubb built a second house of riverstone 20 feet to the south, which can be seen on the right in the above photo and is now 19 Jason Road. This is the 3rd or 4th oldest building in Etobicoke. Grubb connected the two houses with above and underground passageways. The new house was built in a Regency cottage style, with a low pitched hipped roof and a verandah facing south, overlooking the river. It still has its original French-style casement windows, doors and transoms.

At 32 and 34 Jason Road, houses have been built on what were the riverstone foundations of Grubb’s 1835 barn and piggery, respectively.

Grubb was both a farmer and a businessman. He was president of the Weston and Albion Plank Road Companies. In 1847 he registered a plan for a village at Islington and Albion called St. Andrew’s after his birthplace - the first plan filed in Etobicoke. Unable to obtain that name for the village’s first post office in 1851, it became Thistletown instead, named for the village’s Doctor Thistle.

John Grubb died in 1850, and his eldest son, William Grubb(e), in 1889.  The family was then forced to sell “Elm Bank” to pay debts related to the plank road companies. Until 1930, they continued to live in a third house called “Brae Burn” that Grubb had built pre-1850 east of Albion Road.

In 1971, 19 Jason Road was repurchased by a Grubb descendant, as was number 23 soon after. Today, both houses are owned by John and Janet Grubb’s great-great-great grandson, who had the houses designated under the Ontario Heritage Act to ensure they would continue to enhance this neighbourhood for many years to come.