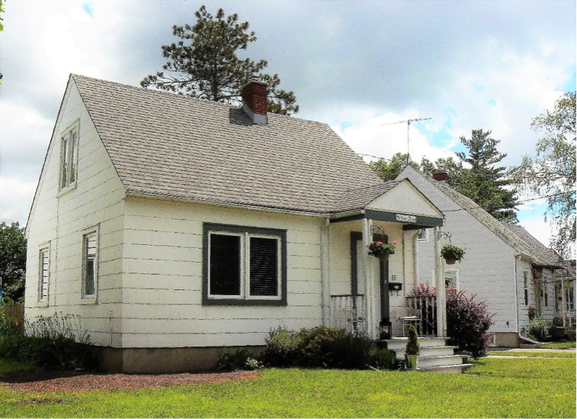 Examples of wartime houses in Queensway Park in 2017 (Denise Harris)
Tucked away northwest of the intersection of The Queensway and Royal York Road is a pleasant family neighbourhood named Queensway Park, with interesting circular streets and cul-de-sacs, and about 200 homes surrounding a large park with the same name. Although many of the homes have been altered over the years, there is still an obvious connection among them for they were all originally small residences, many painted white, built in 1945-46 from federal government-provided floor plans.

However, as World War II was ending, larger neighbourhoods were built to fill a growing need to house returning veterans and their families. The homes in Queensway Park are typical of those built for returning soldiers: 1 ½ storeys, steeply-pitched roofs, clapboard walls, small sash windows, basements, and small metal chimney stacks. Inside, the main floor often had a living room, kitchen with dining area, bathroom and one bedroom, while the upstairs had two more bedrooms. This architectural style has been referred to as “Simplified Cape Cod” or “Strawberry Box.”

A similar neighbourhood was built in East York, northwest of Victoria Park Avenue and St. Clair Avenue East. Like the one in Etobicoke, it has curving streets, cul-de-sacs, and a large park named Topham Park after Victoria Cross winner Corporal Frederick Topham. Topham also has an Etobicoke connection as he is buried in Sanctuary Park cemetery on Royal York Road. One corner of Topham Park has been dubbed “Sunshine Valley” because when a local bus driver named “Mac” stopped there, he always called, “All out for Sunshine Valley”, a reference to an early lack of trees.

Wartime housing was also built in North York near Jane Street and Trethewey Drive. This development is known as “The Wishbone” after an unusually laid-out street of the same name.

In Scarborough, wartime housing consisted of dormitories constructed in 1941 for the many employees - primarily women – doing munitions work at the General Engineering Company (GECO) near Warden Avenue and Eglinton Avenue East.

Today, despite renovations over the years, most of the houses in Queensway Park still display their original cozy feel. These residences are well-maintained and much loved by the families which inhabit them. Some owners have planted Victory Rose Gardens in remembrance of the circumstances that created their neighbourhood. The importance these modest houses hold within the context of Canadian history was acknowledged by Canada Post in 1998 when they featured the humble “Veteran’s House” on a stamp.