It has been said that there are few areas as well defined by district boundaries as Alderwood: on the east by Kipling Avenue, on the west by Etobicoke Creek, on the north by Evans Avenue and on the south by the Canadian National Railway tracks.

Alderwood is part of the old Colonel Samuel Smith Tract which was between Kipling Avenue and Etobicoke Creek from Bloor Street south to Lake Ontario. Col. Smith lived in a 1-storey wooden house south of Lake Shore Road just east of Etobicoke Creek. He served in the Queen's Rangers when Toronto was being established, and twice was administrator of our province when the lieutenant-governor was absent.

Most of Etobicoke was surveyed into 100-acre farm lots for settlement, except the lots which touched Etobicoke Creek, the lake, or the Humber River were usually smaller because those lot boundaries were irregular, not straight lines.

Joseph Brown emigrated from Yorkshire, England, in 1831 and became the first permanent Alderwood settler establishing a farm on the west side of "Brown's Line" between Evans and North Queen.

The 1856 map of Etobicoke shows the farm extending west to Etobicoke Creek and also narrow 50-acre farms on both sides of Brown's Line from Dundas to Bloor.  Joseph had a son Joseph F. Brown.

Perhaps the best-known farm in Alderwood was Ashfield between Horner and Evans Avenues east from Brown's Line 3/5ths of the way to Kipling Avenue. It consisted of three 100-acre lots side by side.  Archibald Cameron, a Toronto merchant, built the Ashfield manor-house about 1850 with 14 rooms and a number of fireplaces, one with a crane from which hung the cooking pot.  In the 1960s, the entire centre section of the house was replaced as it had structural problems.  In 2009, this newer section, along with the original wings of the house were completely demolished and replaced by townhomes.

As a real estate broker Daniel Fisher Horner discovered the opportunity to buy Ashfield from Cameron who happened to have a financial problem in 1874. Daniel Fisher Horner was elected to Etobicoke Township Council from 1881 to 1884 and again in 1886. In 1891 natural gas was discovered at the Mimico Asylum when sinking a well for fresh water. A new well was sunk at Ashfield and it provided natural gas for lighting and cooking until 1917 when the manor-house was wired for electricity. Son Franklin Horner was a school trustee for 20 years.

To the east of Ashfield was the Wm. D. and John Lafferty Farm with its homestead at what was to be 12 Connervale Avenue. In 1878 John O'Connor purchased the farm.  John O'Connor's first job on arriving from Ireland was as a hod carrier for the building of Ashfield while he was living in a small old log cabin on the Lafferty Farm. John O'Connor and his wife Ellen O'Leary were musical but it was their 6 daughters who were the sensation at Shea's Vaudeville Theatre in Buffalo from which they went on to tour the United States, and Europe for years.

Hamilton to Toronto rail service began in 1853 with Mimico having a station and a subdivision for commuters but few purchased lots for homes.  The Toronto and Mimico Electric Railway and Light Co. was formed in 1890 to have streetcars on Lake Shore Road while the Mimico Real Estate Security Co. was establishing the industrial New Toronto. Streetcars didn't reach Etobicoke Creek until July 1, 1895, but small lots were for sale on Kipling from Lake Shore Road to Horner Avenue.  Kipling at that time was called Mimico Avenue. Long Branch began in the late 1880s as a summer resort with a dock for boats.

In the early years Evans Avenue did not extend east of Kipling and The Queensway did not go west of Kipling.  In 1909 the Middle Road Bridge on Evans Avenue was built across Etobicoke Creek joining the Middle Road in Mississauga which was mid way between the
Lake Shore Road and Dundas running westward. It was the first concrete truss bridge in Canada, the second in North America. It was designed by Frank Barber & C.W. Young with Octavius Laing Hicks the Humber Bay hotel keeper and bridge contractor in charge. A herd of cattle proved it was safe to use!

The close of World War I saw great changes in Alderwood. In 1918 Edgar T. Stephens bought the farm on the northwest corner  of Brown's Line and the railway tracks. Soon it was subdivided with streets named Asquith, Borden, Fosh, Gort, Haig, Jellicoe, and Lloyd-George.  He followed this by Alderbrae, Hallmark, Lunness, Rimilton, Sheldon and Valermo in 1920 northeast of Brown's Line and Horner.  Then came Alpha, Beta, Gamma and Delta Streets with thoughts of the Greek alphabet.

A volunteer fire brigade was organized with William O'Connor, Robert G. Johnson and William Patterson as trustees and John P. O'Connor as Chief in 1931. 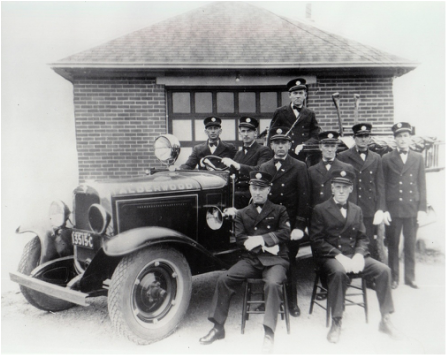 Alderwood fire brigade in the 1930s - Source: Unknown
Stepping back to the early 1840s Etobicoke Township was divided into 7 school sections.  Mimico was S.S.#1 with a school on Royal York Road probably near the lake. Eatonville was S.S.#2 and its popular "Swamp School" was on the northwest corner of Brown's Line and Bloor Street.  Children hid in the decaying trunks of the big elm trees!  Joseph Brown was one of the trustees.  Lambton Mills was S.S.#3 and Islington came later as S.S.#8.

In 1889 S.S.#12 was created with an acre site on the south side of Horner Avenue purchased from Richard R. Newborn for $750. A little red brick school was built by trustees John O'Connor, James Martin and Simon Whitlan.

The Ontario and Quebec Railway which is now the C.P.R. let it be known in 1910 that it wanted to run a spur line from Islington to the Lakeshore through the schoolyard. William O'Connor, Franklin Horner and a third trustee made an agreement with the railway whereby the railway would purchase a new school site, erect a school and give them $150 in exchange for their original schoolhouse and playground.

The new site chosen was the beginning of the Franklin Horner School. It began as a 1-room brick school built by McKessock Construction Co. and foremost among the many innovations to be introduced were large-size wall-mounted slate blackboards. Individual wooden desks for the children, many glass windows and a coal-burning stove!

For children living near the lake, classes were held in Long Branch Baptist Church which opened December 19, 1914, while a new 4-room school was being built on 31st Street at Lake Shore Road.  New Toronto became S.S.#13, Sunny Lea S.S.#14 and Queen Street became S.S.#15. Long Branch insisted on being S.S.#12 so Alderwood was given the last of the old numbers S.S.#16.

About 1932 the local Taxpayers' Association held a meeting in Sir Adam Beck School. It was decided to apply for a local Post Office to be called Alderwood, a name suggested by Robert Johnson.  However, when the new post office opened in 1935 in a small store on Horner Avenue at Delta Street, its name was the "Brown's Line" post office. It closed in 1958.