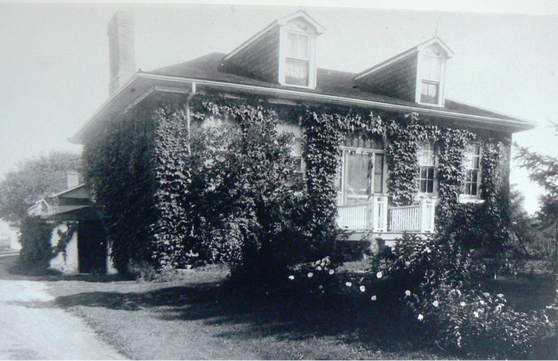 Home of John Jr. and Ellen O’Connor and their nine children at 12 Connorvale Avenue. Demolished in 1989. [Courtesy: Montgomery’s Inn]
Before radio, before television, there was vaudeville! And this ivy-covered cottage that once stood at 12 Connorvale Av. in Alderwood was the home of the famous O’Connor Sisters who sang on the North American vaudeville circuit from 1910 to 1937.

Their grandparents, John and Johanna O’Connor, arrived from Ireland in 1851 and by 1866 were farming over 80 hectares of land on the west side of Brown’s Line, between Horner Av. and Lake Shore Blvd. W. In 1878, John bought this house on Connorvale for his eldest son, John Jr., who married Ellen O’Leary in 1879. The house had been built by William Lafferty in the 1850s in the “Regency Cottage” style, with stone walls three feet thick, a low hipped roof, deep eaves, and tall windows.

John Jr. and Ellen had one son and eight daughters who all grew up in this house. Ellen had been a professional singer and John played the violin, so the home was always filled with music. Harmony singing came naturally to the girls , and the older ones sang at local banquets and concerts. In 1910, a relative arranged for the four eldest girls - Anna, Ada, Mary and Nellie – to audition in Buffalo for Michael Shea, owner of the Shea Theatre chain. He was so impressed that he immediately booked them to perform in Buffalo, where they received rave reviews. In 1912, Kathleen and Vera joined the group and they became “The Six Singing O’Connor Sisters”, the only authentic six sister group ever in show business. They would travel throughout North America by train and bus, but always returned home in summer to help on the farm. They performed with many other stars of the day, including Jimmie Durante, Al Jolson, Sophie Tucker and Eddie Cantor. By 1925, Ada, Annie and Nellie had married, so Madeleine joined the group to form a quartet. Sister Geraldine, while a talented singer herself, declined to make singing her career and went into business instead.

The sisters retired in 1937, coming full circle with a final performance at Shea’s Theatre in Buffalo. However they continued to sing close to home for private parties and wartime benefits. Their last appeared on stage was in 1973 when they were honoured by the CBC. In 1989, the last surviving sister, Geraldine, moved out of the house, and it was sold and demolished. In 2009, a heritage plaque about the O’Connor Family was installed in front of a new house that now sits at at 12 Connorvale Av.