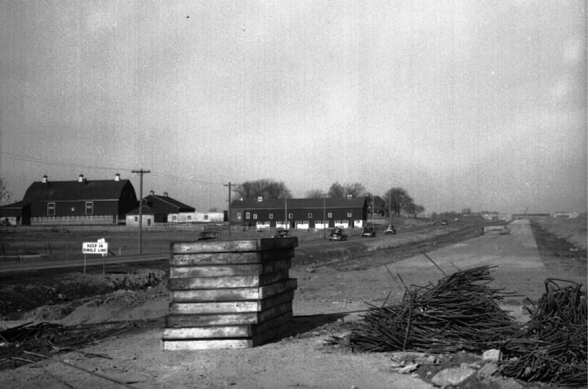 Highway 27 under construction, looking north from just north of Bloor Street West in 1953. The T. Eaton Company farm can be seen on the west side of the highway. (Courtesy: Toronto Public Library)
About 1891, Timothy Eaton had a problem: he needed a plentiful supply of fresh cream for the highly successful soda fountain that operated all summer in his downtown store, but city dairies were not meeting his requirements. So Timothy went shopping for land where he could raise his own dairy cows and meet his own demand.

First he bought 100 acres of land from Peter Shaver’s estate on the west side of Highway 27 between Bloor and Burnhamthorpe, and then be bought another 100 acres from Thomas Montgomery’s estate on the east side of the highway. Soon he was also using the milk and cream in his grocery department and restaurants.

Timothy Eaton died in 1907, but the Eaton family continued what he had started. Their next step was to raise and slaughter beef cattle and hogs, and they pickled pork in huge vats on the farm. Finally fresh vegetables were added to the farming mix. They purchased more land and by 1944, the farm had grown to 369 acres on both sides of Highway 27.

When Timothy first bought Peter Shaver’s land, School Section No. 2, known affectionately as the “Swamp School”, was located in the southeast corner of the lot. Eaton gave the school’s trustees title to a generous piece of land, making the entire corner school property. At that time, there was a movement to rename the school “Eatonia”, but the old name survived.  In 1909 the Eaton Family paid $10,000 to pave Dundas Street from the CPR crossing at Royal York Road to Etobicoke Creek with a new soft tar product called Tarvia. Highway 27 was sometimes referred to as “Eaton Road”, and the Toronto Suburban Railway, which operated along Dundas Street from 1917 to 1931, had a stop at Highway 27 called “Eaton Farm.” In 1918 the school trustees officially renamed the school “Eatonville”, a name that has stuck, and indeed the whole area became known as Eatonville.

T. Eaton Company sold their farm in Etobicoke  to Confederation Life in 1947, and the property was subdivided. The name Eatonville lives on today in Eatonville Junior School (at 15 Rossburn Drive near Bloor and The West Mall) and in Eatonville Public Library (southeast corner of Burnhamthorpe and The East Mall.) And it’s all because Timothy Eaton needed a bit of fresh cream one day in 1891!