Eatonville was a farming area. It could be said that its "Swamp School" brought the community together.  Peter Shaver (originally Schaeffer) bought his 100 acre Applewood Farm on the west side of Brown's Line (now Highway 427) between Burnhamthorpe and Rathburn Roads in 1830.  The lot to the south, from Burnhamthorpe to Bloor Street was a leased Clergy Reserve lot and Peter Shaver was permitted to buy it in 1846. Before he made the final payment he donated the site for a school on the north side of Bloor just west of Brown's Line to the Home District Council. This was for Etobicoke's School Section #2 which was very roughly from Kipling Avenue west to Etobicoke Creek and from Rathburn to The Queensway. School Section #1 was Mimico, #3 was Lambton, #4 Richview. Islington came later as #8.

Peter Shaver gave the site to trustees Newman Silverthorn, John Wood and Charles Shaver on December 16, 1845 while Joseph Ward and J. Elliott were witnesses.  A small log school was erected and then clapboards applied to the outside. Henry Martin , an artist of note, was one of the first teachers. In 1857 Alex Macpherson was hired as teacher and stayed until 1864 when he was appointed Etobicoke's clerk/treasurer. His son John A.L. Macpherson often recalled how the school was practically surrounded by forest, largely elm, beech, maple and cedar. Some of the elms were 3 to 4 feet in diameter with their centres rotted out so children could hide inside.  There was a bit of a swamp and lots of frogs.

The annual report of the school inspector, the Rev. Thomas J. Hodgskin, on December 31, 1851, listed the school as being about 20 x 26 feet, of frame construction and having been built and opened in 1844. In 1857 there were 137 pupils in the school section between the ages of 5 and 16, of which 85 were on the school rolls, plus 2 over 16, and of which 50 at the school were boys.  At the 1863 annual school meeting it was decided to make Swamp School "free". The township council was requested to raise the money required for school purposes by a tax on all rateable property in the school section, collect it, and pay it over to the school trustees to pay salary and other expenses. Prior to this, the expenses for carrying on the school were paid by the parents at a set rate per child. Those without children were not required to contribute to the school. The government made a grant to each school operating under either system.

The early teachers were usually men, some who could find no other employment.  Thomas Winterton taught in the 1870s while farming the Old Stone Tavern Farm at Dundas and Highway 27. Three teachers left to study medicine. Trustees have included Joseph Brown of Brown's Line, George Mercer, William A. Marshall, Thomas Goudge, and Mrs John Reid of the Eatonville Women's Institute who gave the school its name, hot chocolate at lunch time and the Tweedsmuir History of the Eatonville area.

In 1891 Timothy Eaton purchased 100 acres on the west side of Brown's Line between Burnhamthorpe and Bloor from Peter Shaver's heirs, and 100 acres on the east side of Brown's Line from Thomas Montgomery's heir.  He gave the "Swamp School" the wee pieces of land on the northwest corner of Brown's Line so the school yard was on Brown's Line as well as on Bloor Street. He bought the farms originally to obtain cream for the soda fountain in his store that flourished during the summer months.  Cattle and hogs were slaughtered on the farm and pork was pickled in huge vats.  From 1928 to 1938 it was primarily dairying and later mixed farming.  In 1909, the Eaton Family paid $10,000 to pave Dundas Street from the CPR crossing at Royal York Road to Etobicoke Creek with a new, more durable soft tar product called Tarvia. By 1944 the Eaton Farm consisted of about 369 acres and on September 15, 1947 was sold to Confederation Life Association.

The original wooden school gave way to a brick one-room school in 1870.  In 1913 a frame classroom was built because a subdivision was being developed with Summit Road, Laurel and Shaver Avenues south of Burnhamthorpe and east of Brown's Line.  It was thought the Toronto Suburban electric Railway to Guelph would go along Burnhamthorpe but it followed Dundas.  In 1925 two classrooms were built onto the front of the 1870 school and the frame classroom wasn't used until 1944 except on Sundays by Anglicans. Eatonville and Islington trustees joined to build Wedgewood School and the Eatonville complex became storage rooms and were demolished in 1956 when the Department of Highways built the Bloor Street overpass.  Today's Eatonville Junior School on Rossburn Drive opened in 1957.

In 1820 John Shaver, age 21, came to Etobicoke and bought 100 acres east of Brown's Line between Burnhamthorpe and Bloor.  Four years later he sold it to younger brother George who had a son Charles.  In 1830 Peter Shaver, age 21, came to Etobicoke and bought the Applewood Farm.  It is believed Peter was a magistrate for the Home District in 1843, which involved civic affairs as well as the courts at that time. 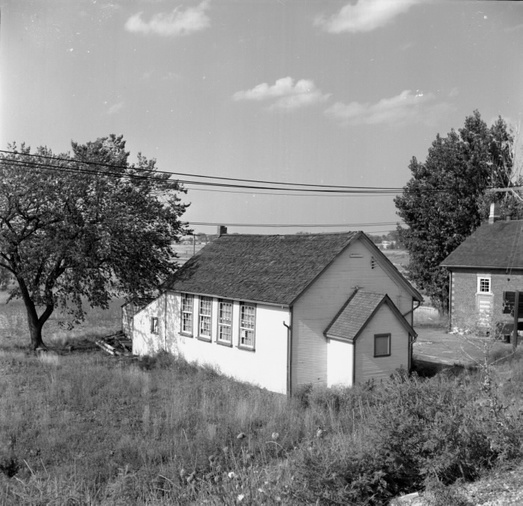 Eatonville Public School (1827-1870), Highway 427, n.w. cor. Bloor St. W. - Toronto Public Archives
The Shavers were Methodists and involved with establishing chapels in Islington and Lambton Mills. A third chapel at Cooksville made a 3-point circuit without a parsonage. In 1864 James Woodsworth was a young student circuit-rider and he boarded at Applewood.  There he met Peter's daughter Esther Josephine Shaver!  They were married in 1868 and in 1873 he was back on the Cooksville-Islington-Lambton circuit.  The following year James Shaver Woodsworth was born at Applewood. Nine years and 3 more children later they went to Portage la Prairie where the Rev James Woodsworth was to be Superintendent of Missions for the prairies.  Young James Shaver Woodsworth studied at Oxford and while in London visited some missions where he developed an acute social conscience.  As a Member of Parliament at Ottawa he had the Old Age Pension Act passed.  The last to occupy the Applewood Homestead was Isabel Shaver Bishop and her husband Percy Wiley Bishop.  She died June 10, 1980 and the home was moved on September 25 from 471 Burnhamthorpe to 450 The West Mall in Broadacres Park where it is available for weddings, receptions and special events.

Ebenezer/Renforth Baptist Church on Burnhamthorpe west of the Applewood Farm is probably the 4th oldest congregation in Etobicoke. It is believed Ann Elizabeth Ross Mercer, the young widow of Levi Heath Mercer began a Sunday School class for her children and their friends in her home in 1836.  Two years later the parents formed a congregation with the Rev. James Brooks as pastor. Pastor Brooks had come to Canada as a missionary from England. A little frame chapel was built about 1842 on the south side of Burnhamthorpe. It was unpainted and bare with only 2 windows and coal oil lamps for flickering illuminations. Benches were of plain boards with a plank at the back for a shoulder rest. The pulpit had a tuning fork to start the singing. The site was formally transferred by Samuel and Margaret Mercer to Jonathan Orth, Samuel Bigham and Alexander McFarlane as trustees.

After 40 years and due to failing health Pastor Brooks asked the Baptists who were to found McMaster University to care for the congregation. In 1882 a new brick church seating 200 was opened on the north side of Burnhamthorpe.  In the early 1950s there was great home-building activity so a larger church was begun and dedicated on St. Patrick's Day 1957.

The Samuel and Ann Mercer homestead, built circa 1830, may still be seen at 72 Old Burnhamthorpe Road and is likely the 3rd oldest building remaining in Etobicoke.