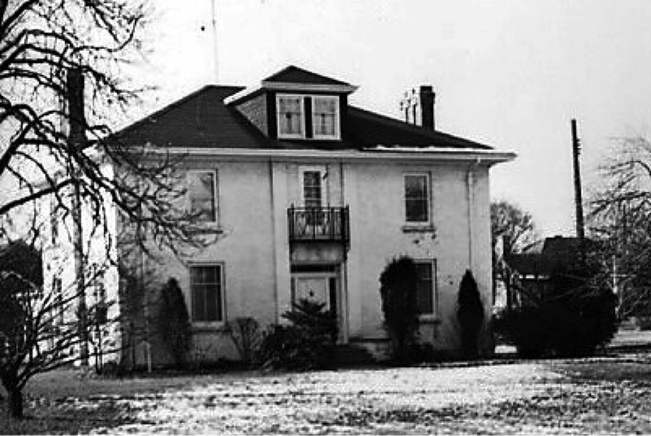 Brick house built by Archibald Thompson ca. 1860 at what today is 7 Meadowcrest Road. Photo 1954.Toronto Public Library/PHOTO
The story of the house at 7 Meadowcrest Road in Sunnylea begins in 1803 when Alexander Thompson received a grant of 200 acres (80 ha) of land in Etobicoke for his service to the British during the American Revolution. His property extended from Bloor Street south to about Leland Avenue, between Islington Avenue and Royal York Road.

Alexander arrived in Upper Canada from the United States in 1792. He soon married, although his wife’s name is unknown. Initially they lived in the Town of York and their four children were born there between 1796 and 1804. Mrs. Thompson died soon after 1804 and was buried on the Etobicoke property. Alexander called his farm on Lot 15 (the north half of his property) “Rose Bank” and he built a house made of stone on the south side of Bloor, about where Thompson Avenue is today. In 1805, he sold Lot 14, the southerly of his two lots. Alexander died in 1831 and was buried with his wife. In his will he left Lot 15 to his eldest child, Alexander Jr.

Lot 14 passed through seven different owners. The 1852 census shows there was a frame 1 ½ storey house on the property. In 1855 the property was purchased back into the Thompson family by Alexander Jr.’s eldest son, Archibald, who called his farm “Spring Bank.” The 1861 census shows that there was now a brick two-storey house on the property. This new house was built with a hipped roof and an exterior of red brick with yellow brick quoins. A later owner covered the brick with stucco (which was removed during a modern restoration.) The original verandah across the front of the house was replaced around 1876 by the current Neo-classical portico with a balcony above. The house still has its original oak front door, cherry banisters and ten foot high ceilings.

Unfortunately, Archibald and his wife Mary Jefferson both died in their 30s during the 1860s. Their four children, all minors, were raised in the households of other local Thompson family members. Their eldest son, George, lived with his grandparents, Alexander Jr. and Ellen, until title to Lot 14 was transferred to George in 1878.

After Alexander Jr.’s death in 1883, Lot 15 was transferred to his son Andrew. Together George and his Uncle Andrew focused on tree fruit farming, becoming known for the high quality of their apples, pears, plums, and cherries. A street near 7 Meadowcrest is named Orchard Crescent after the Thompson orchards.

Eventually the house at 7 Meadowcrest was sold out of the Thompson family, but as late as the 1950s, there were still Thompson descendants in three houses on Thompson Avenue.  Andrew’s son Edward, had a large house built at 24 Thompson ca. 1900 and the last Thompson residents living there were Edward’s two sisters, Charlotte and Elizabeth, who died in 1950 and 1951 respectively.