The story of this house begins in 1803 when Alexander Thompson received a grant of 200 acres of land in Etobicoke for his service as a sergeant in Lieutenant Governor John Graves Simcoe’s Queen’s Rangers during the American Revolution.  His property, consisting of Lots 14 and 15 in Concession II Meridian, extended from Bloor Street south to about Leland Avenue, between Islington Avenue and Royal York Road. 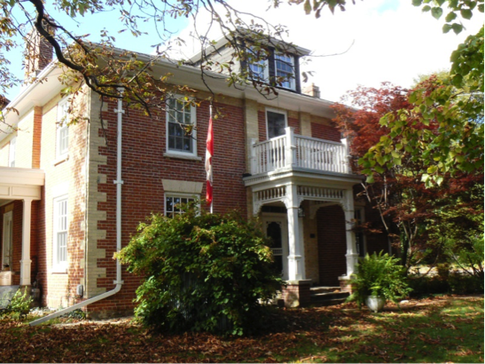 7 Meadowcrest Road "Springbank" Built ca. 1855-60
It is believed that Alexander arrived in Upper Canada from the United States in 1792. He married soon after arrival, although his wife’s name is not known. Initially they lived in the Town of York and their four children (Alexander Junior, Mary, Jane and James) were born there between 1796 and 1804. Mrs. Thompson died soon after 1804 and was buried on the Etobicoke property.

Alexander called his farm on Lot 15 (the northerly of his two lots) “Rose Bank” and built a house made of stone, likely harvested from the valley of Mimico Creek which ran through his property.  This house was located on the south side of Bloor, about where Thompson Avenue is today. In 1805, he sold Lot 14, the southerly lot, for a set of harrow pins, an old mare and £6 in cash.

During the War of 1812, Alexander served as a sergeant in the 3rd York Militia and fought in the Battle of York on April 27, 1814, where he was captured and paroled by the Americans.

Alexander died in 1831 and was buried beside his wife on their Etobicoke property.  In his will he left Lot 15 to his eldest child, Alexander Jr.; an annual income of £12 to his youngest child James; £8 to his daughter Mary (married to John Giles) to tend her livestock; and 5 shillings to his daughter Jane. He left one of his grandsons a yearling heifer and a clock.  His other two grandsons received £3 each. (I wonder what message Alexander is sending his daughter Jane!)

Meanwhile Lot 14 passed through six different owners, and in 1847 was purchased by William Gamble who lived beside his grist mill on the Humber River, just north of Bloor.  He leased out Lot 14 to an Alex Campbell and 1852 census records indicate there was a frame 1 ½ storey house on the property.  In 1853-4, this lot was leased to Alexander Jr. In 1855 Gamble sold Lot 14 to Alexander Jr.’s eldest son, Archibald. The 1861 census shows that there is now a brick two-storey house on the property. This new house, at 7 Meadowcrest Road today, was built in a Regency style with a hipped roof and an exterior of red brick with yellow brick quoins. The bricks were kilned on the property and one report says that the paw marks of wild animals lurking around the building site at night can still be seen in some of the bricks. The house has its original oak front door, cherry banisters and ten foot high ceilings. At first the house had a verandah across the front, but it was replaced around 1876 by the current Neo-classical portico with a balcony above. Archibald called his farm “Spring Bank.”

By this time, there were also Thompson descendants living on and farming Lot 12 and part of Lot 13 in the same concession. Unfortunately Archibald and his wife Mary Jefferson both died in their 30s during the 1860s.  Their four children, all minors, were raised in the households of other Thompson family members, with the eldest son, George, living with his grandparents, Alexander Jr. and Ellen, until title to Lot 14 was transferred to George in 1878.

After Alexander Jr.’s death in 1883, Lot 15 was transferred to his son Andrew. Together George and his Uncle Andrew changed the focus of their farms to orchards, becoming known for the high quality of their apples, pears, plums, and cherries. A street near 7 Meadowcrest is named Orchard Crescent after the Thompson orchards.

As late as the 1950s, there were still Thompson descendants in three houses on Thompson Avenue.  Edward Thompson, Andrew’s son, had a large house built at 24 Thompson ca. 1900 and the last Thompson residents living there were Edward’s two spinster sisters, Charlotte and Elizabeth, who died in 1950 and 1951 respectively.

Eventually the house at 7 Meadowcrest was sold out of the Thompson family. From 1939 to 1966, it was the home of John and Minnie Parkin. John was a leader in the Christadelphian Brethren. The Parkins were also the parents of Toronto modernist architect John B. Parkin and landscape architect Edmond T. Parkin, who were partners in the firm of John B. Parkin and Company, established in 1947. 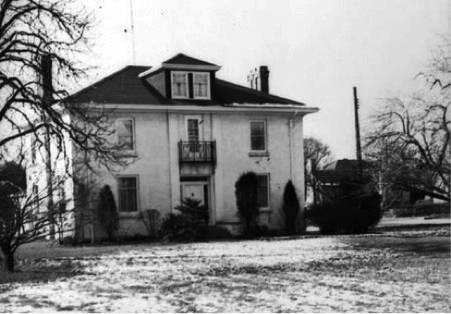 7 Meadowcrest Road in 1954 when occupied by the Parkin family. Its original brick exterior has been covered with stucco, which was removed in a more recent renovation. (See 2012 photo at beginning of article). (Source: TPL)
Both sons were living at 7 Meadowcrest in 1942 when John received his first significant public commission to build a new Sunnylea Public School on Glenroy Avenue. He based his design for the new school on the award-winning Crow Island School in the Chicago suburb of Winnetka. Just a single storey, each classroom had large windows to let in sunlight and its own door to an exterior play area. Each child had their own individual, moveable chair and table, rather than desks fixed to the floor. Sunnylea School became the prototype for over 200 schools in Ontario designed by Parkin or his employees in the 1940s, 50s & 60s. John went on to become a leading figure in International Modernism in Canada. For more information on John B. Parkin see: www.dictionaryofarchitectsincanada.org/architects/view/1973