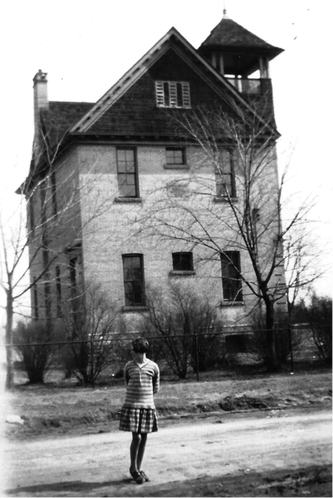 Sunnylea Public School on east side of Prince Edward Drive South, opposite Sunnylea Avenue West, in the 1930s. (Courtesy: Montgomery’s Inn)
In 1907, Etobicoke was still a rural community and Lambton Road (now Prince Edward Dr. S.) was lined with market gardens. One and a half acres of land was purchased for the new School Section 14 on the east side of Prince Edward, opposite today’s Sunnylea Avenue West. The school was built of white brick with two classrooms, separate entrances for boys and girls on either side of the building, and a tall bell tower that could be seen for miles around. It had an exterior pump for water and outdoor privies; there were no indoor bathrooms until 1939.

The trustees held a contest to name the school and Edna Whitworth, age 7, won $5 for suggesting the name “Fairview.” It was then discovered that there was already another school not far away with that name. Edna’s mother gave back the $5, but one trustee felt so badly that he gave Edna $2 from his own pocket. The contest was run again and Edna won again with the name “Sunnylea.” Soon the school had given its name to the whole community surrounding the school.

By 1941 the school was overcrowded with 100 students on the rolls, while 32 overflow students were attending five other schools. A new Sunnylea Public School opened at 35 Glenroy Av. in 1943. This unique new school was designed by Toronto architect John B. Parkin, based on the award-winning Crow Island School in the Chicago suburb of Winnetka, Illinois, designed by Eliel and Eero Saarinen in 1940. Its modernist design heralded a new era in school architecture. For Parkin, it was his first significant public commission, and Sunnylea School became a prototype that would be duplicated in over 200 schools across Ontario designed either by him or his firm, Parkin and Associates. Taken for granted today, the design of Sunnylea School was one storey, with classrooms situated on a north/south access to take advantage of natural light. Each classroom had a large expanse of window area, including a corner window, as well as its own exterior door to a separate play and garden area. Desks were no longer attached to the floor, and each had a separate, moveable chair.

​The original Sunnylea School on Prince Edward was used as the school’s caretaker’s apartment for awhile after 1943, and then was a community centre until it was demolished in 1953.  In its place now sits Sunnylea Park.