Sunnylea Avenue East and West and the Etobicoke neighbourhood of Sunnylea were both named after a school built in that area in 1908.  In 1907, 1½ acres of land were purchased on the east side of Prince Edward Drive, opposite the location of Sunnylea Av. W. today.  It was to be the location of a new School Section #14.

A decision was made to hold a contest to name the school, and Miss Edna Whitworth, age 7, won $5 for suggesting the name “Fairview.”  It was then discovered that there was another school not too far away with that name.  Edna’s mother gave back the $5, but the trustee felt so badly that he gave Edna $2 from his own pocket. They ran the contest again, and Edna won again with "Sunnylea.”

Soon the school had given its name to two nearby streets and the whole neighbourhood. 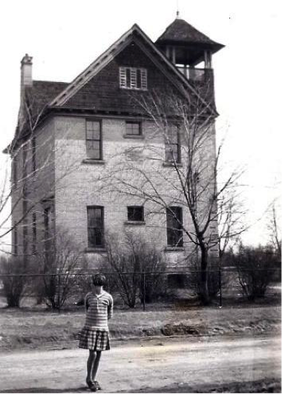 As a footnote, by 1941 the school was overcrowded and in 1942, a new Sunnylea Public School was opened on nearby Glenroy Avenue.  This unique new school was designed by Toronto architect John Parkin, based on the award-winning Crow Island School in Winnetka, IL.  Parkin went on to design over 200 schools in the 1940s, 50s & 60s.

The old Sunnylea school on Prince Edward Drive was used as the school’s caretaker’s apartment for awhile, and then as a community centre until it was demolished in 1953.  In its place now sits Sunnylea Park.