Rural Hospital Was a ‘Palace of Sunshine’ 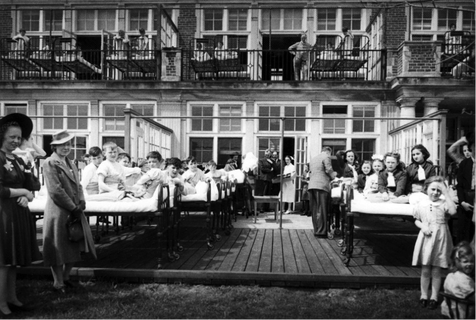 The Country Branch of the Hospital for Sick Children in Thistletown on opening day, 1928, showing the south-facing sleeping porches. Courtesy: Hospital for Sick Children Archives.
Vaccinations, organ transplants, dialysis, pharmaceuticals, chemotherapy... these are medical advancements that we take for granted today!  But in 1927, these treatments did not exist, and evidence of how far we’ve come lies hidden away at 51 Panorama Court in a building that is one of Northern Etobicoke’s best kept secrets.

This large property began its story in 1927 as the “Country” Branch of Toronto’s Hospital for Sick Children.  As early as 1921, the hospital considered the possibility of building a convalescent hospital in the country to replace their Lakeside Home for Little Children at Hanlan’s Point.  After a two year search for just the right rural site, in 1925 they purchased 90 acres of farmland near Thistletown in Etobicoke.
The renowned Toronto architectural firm of 50,000 tree seedlings were planted on this former farmland.

The new hospital was described as a “Palace of Sunshine”, custom-designed for children requiring helio (sun) therapy or long-term rehabilitation, e.g. while recovering from rheumatic fever, polio or major surgery.  The building accommodated 112 patients in south-facing rooms with beds that could be wheeled outside onto wide sleeping porches in nice weather.   It was officially opened on October 24, 1928 when members of the Toronto Automobile Club picked up 44 children at the Toronto Islands ferry dock and transported them to the new hospital in a celebratory “parade”.

Over time, medical advances we now take for granted reduced the need for this type of hospital. By the 1940s, it was being used primarily for polio cases, and after a major power failure in 1954 during Hurricane Hazel, a decision was made to close the facility.
In 1957, the Ontario Government bought the property and it was turned into the first residential mental health centre for children in Ontario.  To-day, Thistletown Regional Centre for Children and Youths still offers specialized services to young people with complex mental health, behavioural or developmental challenges.  However, the Ontario Government recently announced that this highly regarded facility will be closing in 2014, and for now the future of this unique heritage property is unknown.
Over the years, the property’s land area has been reduced to 36 acres. However, those 50,000 seedlings planted in 1928 have created a beautiful park-like setting, and there are public paths through the grounds where all are welcome to take a stroll.