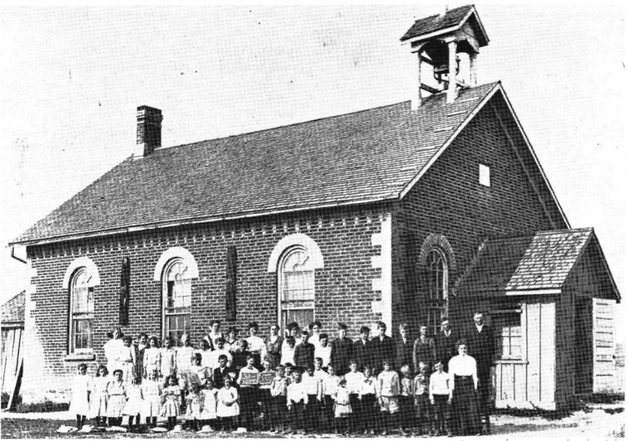 Richview’s third school, built in 1874 on the northwest corner of Richview Side Road (now Eglinton Av. W. ) and Second Line (now Martin Grove Rd.) Montgomery’s Inn/PHOTO
For 143 years, there was a Richview elementary school near the  intersection of today’s Eglinton Avenue West and Martin Grove Road. In fact the Richview area had a series of five schools, each larger than its predecessor, as the area’s population increased. Today only one remnant of these schools remains available to public view.

In 1838, residents of Richview built their first school house of logs on the west side of Martin Grove, a quarter mile north of Eglinton. The school became overcrowded when school attendance was made compulsory in 1846, and a larger log school was built on land donated by Isaac and Ann Stonehouse on the east side of Martin Grove at today’s Stonehouse Park.

By 1874 this second school was also overcrowded, and Matthew and Janet Canning donated land on the northwest corner of Eglinton and Martin Grove for a new school. This school, seen in the above photo, was typical of the many “little red schoolhouses” built across Ontario in that era, where one teacher in one room was expected to perform educational miracles instructing kids of every grade simultaneously. Soon after it opened, the school’s walls mysteriously began to bulge outward. The problem was tackled by mounting wooden logs vertically on each side of the school and tying each log to its opposite with an iron silo rod anchored by turnbuckles. Three of these dark vertical logs are visible in the above photo – two on the side and one to the left of the front window.

In 1915, this third school was finally deemed unsafe and was demolished. It was replaced by a fourth school, two storeys high with a playroom on the main floor and the classroom upstairs. Over the years, enrolment varied between 20 and 80 children, and there were 53 students attending when the school was closed in 1957.

Children were then bussed to neighbouring schools for several years until a fifth Richview Public School opened in 1963 at 59 Clement Road, a block north of Eglinton, east of Martin Grove. This school incorporated in its lobby the school bell and the stone date plaques from both the 1874 and 1915 schools. School enrolment in 1968 was 498, but by 1981, it had dropped to 130 and this school too was closed.

The Toronto District School Board sold the building in 2014 to the Conseil scolaire de district catholique Centre-Sud, a school board that operates French language Catholic schools. The 1963 school at 59 Clement Rd. was demolished and replaced by a new school named École élémentaire catholique Notre-Dame-de-Grâce. The plaque from the 1915 school now hangs in this new school’s lobby. It reads: “SCHOOL SECTION NO. 4 ETOBICOKE 1874 1915.” Although the school would have been happy to hang the old Richview school bell there as well, its location is presently unknown.