Intersection of Richview Once a Busy Village Centre 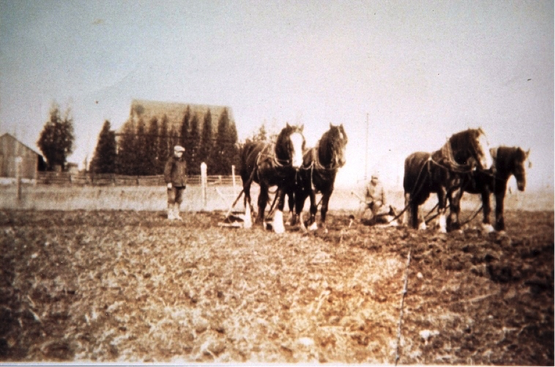 Ploughing on Jimmy Thirkle’s farm, with Richview Methodist Church in the background, looking north, in the 1920s (Courtesy: Montgomery’s Inn)
As difficult as it is to imagine today, the main intersection of the  village of Richview was once located at Third Line (now Hwy. 427) and Richview Side Rd. (now Eglinton Av. W.) In 1818, William Knaggs of Yorkshire, England, purchased a 100 acre lot in the southwest corner of this intersection and farmed there until his death in 1859. Knaggs also built a blacksmith shop on the northeast corner of his property and leased it to fellow Yorkshireman, Christopher “Kit” Thirkle, from about 1850 to 1887.  As a result, many locals called this village’s main intersection “Kit’s Corners”.

In 1853, a group of Richview residents joined together to purchase a small property just south of Kit’s blacksmith shop, and they built a “Union Chapel” where non-denominational church services were held. A cemetery developed just south of the chapel. In 1886, the chapel’s trustees decided to build a larger church of red brick south of the cemetery. This new church opened in 1888 and was named Richview Methodist Church.

Kit Thirkle’s son, James (1850-1918,) farmed south and west of the church on land initially leased and in 1920 purchased from the Knaggs family. James’ son - also named James but called “Jimmy” – farmed this property as well. The Thirkles were well known for their horse breeding skill, and Jimmy won prizes at local agricultural fairs for his high quality oats every year until his death in 1955.
Over the years, this busy Richview intersection also housed a butcher shop, general store, greenhouse, carpenter, turkey restaurant, candy maker, and Richview post office.  Richview Methodist Church (a United Church after 1925) was demolished in 1960 when the Highway 427/401 interchange was built, and in 1962 the congregation moved into a new church building a short distance away on Wellesworth Dr.
​
In this photo taken in the 1920s, you can see Jimmy Thirkle on the left with a hired hand on the right ploughing with two pairs of draught horses. Behind them sits Richview Methodist Church, half hidden by a row of evergreen trees. What can’t be seen in the photo is Richview Cemetery behind the church. This cemetery has miraculously survived, and still provides a pleasant surprise to today’s passers-by when they catch a glimpse of it while zooming past on the ramp from Hwy. 427 northbound to Hwy. 401 westbound