Rexdale Community and Industry Built by One Man 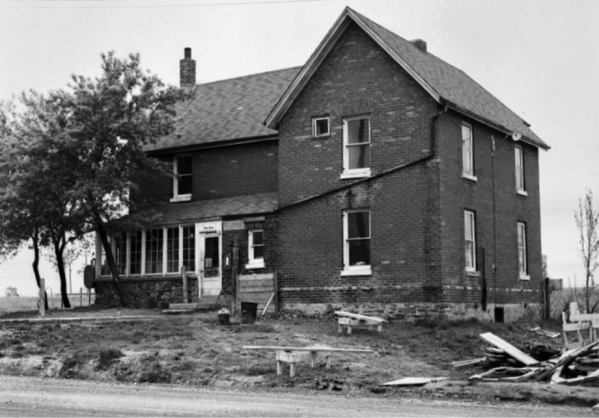 Office of Rex Heslop in May, 1955 in the former farmhouse of Wilbert Wardlaw, on the east side of Islington Avenue. Demolished December, 1955. (Courtesy: Toronto Public Library)
Today, many people refer to the entire area of Etobicoke north of Highway 401 as “Rexdale”. In reality, Rexdale was the name of the very first of many post-war subdivisions built in northern Etobicoke. Rex Wesley Heslop was the visionary developer who gave this first subdivision his name and left an indelible mark on this part of Etobicoke.

Heslop was born in Etobicoke, but was working in Northern Ontario as a gold prospector when an injury forced him to return – broke - in 1947. Without missing a beat, he established Rex Heslop Homes Limited and built 400 homes in Alderwood, west of Brown’s Line. In 1951, Heslop turned his attention to the vacant farmland north of the planned Toronto By-pass, Highway 401. Malton’s aircraft industry was expanding and he knew that their workers would soon need housing. When Etobicoke’s Council advised him that they couldn’t afford to service his new subdivision, Heslop struck an agreement with them that he could continue to build houses as long as he established new industry at a ratio of 35% industrial assessment to 65% residential.

Heslop bought the 100 acre Wilbert Wardlaw farm on the east side of Islington Avenue, opening his office in the old farmhouse seen in the above photo, and building houses on the remainder of the property. On April 24, 1952, he met with 40 employees of the AV Roe Aircraft Company who each agreed to buy a home on Allenby Avenue - the first 40 homes sold in Rexdale. The houses were all bungalows or one-and-a half storeys, and were made of brick or pre-fabricated steel-reinforced concrete panels.

By September 1953, 18 industries had bought lots, primarily west of Kipling Avenue. Within just a few years, the Rexdale industrial area was the largest in the township and Reeve Bev Lewis described the deal they made with Heslop as “the salvation of Etobicoke.” Rexdale Plaza opened in 1956 on the east side of Islington Avenue, north of Allenby Avenue - the 4th shopping centre built in Toronto.
​
Heslop next built the “New Rexdale” subdivision, west of Islington Avenue, north of Rexdale Boulevard, followed by the “Sunnydale” subdivision, west of Kipling Avenue. Eventually Heslop’s developments included 2000 homes and 70 businesses on 1200 acres, and he was a millionaire. Soon other developers were building more subdivisions north of the 401, including Kipling Heights, West Humber Estates and The Elms. In 1956, Heslop moved on to develop the even-larger Delrex subdivision in Georgetown.