Remembering the Lessons Learned in the ‘Little Red Schoolhouse’ 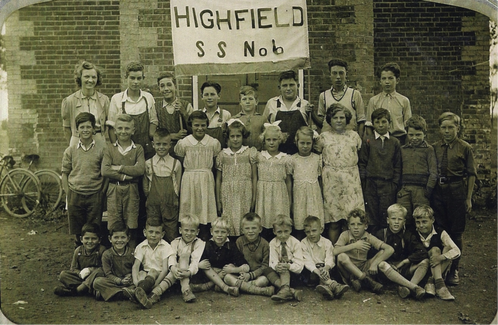 The students of School Section No. 6 in Highfield, Etobicoke, located on east side of Highway 27, south of Rexdale Blvd., in 1939. Nelson Moody is in the front row, fifth from the right. Teacher Dorothy Moody at rear left is Nelson’s aunt. (Courtesy: Nelson Moody)
The iconic “little red schoolhouse” has all but disappeared from Ontario’s landscape, but once upon a time, those stalwart brick buildings with one room and one teacher were the mainstay of our educational system.

Highfield was a village in Etobicoke at the western end of today’s Rexdale Boulevard. John Moody settled in the area in 1831 and three years later married Sarah Gardhouse. Their great-great-grandson, Nelson Moody, attended Highfield’s school, as did many members of his family before him. Nelson has kindly shared pictures and stories of his “little red schoolhouse.”

In 1845, School Section No. 6 was organized in Highfield and a log schoolhouse was built at Rexdale and Martin Grove. School attendance was made compulsory in Ontario the next year. Parents initially paid 25¢ a month per child, but in 1858 all fees were eliminated. The school year was 11 months and seven days long, until 1909 when a September to June school year was implemented. Highfield’s first teachers were members of the community, but in 1853 the trustees hired their first certified teacher, James Srigbey.

By 1874, the village had outgrown the log school, and a new one-room brick schoolhouse was built on a one acre lot the east side of Highway 27, just south of Rexdale, on land purchased from James and Ann Gardhouse for $150. The new school required 31,000 red bricks at $6.75/1000, and 1360 white bricks at $10/1000, and the total cost of the building was $1,789. It was heated with a cast-iron wood stove, water was supplied by an outdoor hand pump, and the bathrooms were outhouses. Over the front entrance a plaque proclaimed “School Section No. 6 - Erected A.D. 1874.” Miss C. Buchanan, the first teacher in the new school, earned $100 per annum. In 1941, the students were delighted when indoor bathrooms were installed – one on each side of the front door. However the school never had any plumbing, so the toilets emptied directly into pipes leading underground. Many a hat was lost down those pipes, thanks to student pranksters!

Etobicoke’s population increased rapidly during the post-war boom and in 1949 the Etobicoke Board of Education was formed. The Board built new, larger schools across the township, making the little red schoolhouses redundant. Highfield’s school closed in 1954 and the children were then bussed to Thistletown. The school was demolished to widen Highway 27 in 1957. In 1964, a new Highfield Junior School opened on Mount Olive Drive, and the old “School Section No. 6” stone is now mounted in that school’s lobby.