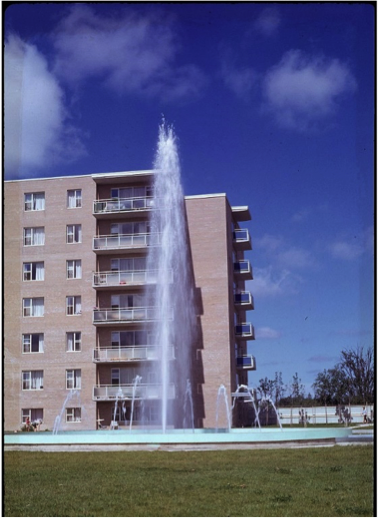 Apartment building with its impressive fountain at 60 Esther Lorrie Drive in Northern Etobicoke in 1961 (Toronto Archives)
In the summer of 1956, a land developer held a family picnic in a field overlooking a valley in Northern Etobicoke. His nephew - six years old at the time - remembers that as far as he could see, there was nothing but grass, with a few scattered trees and some grazing cows. He was told that within a few years, the whole area would be covered with houses and apartment buildings.

Running south from those apartment buildings is Jansusie Road, also named for the developer’s family members, as was Millmink Street running west off Jansusie. Four low-rise “garden” apartment buildings were erected on the east side of Jansusie in the summer of 1958. The buildings were named after the developer’s four children: Jeffrey Gardens (No. 5), Shelley Gardens (No. 15), Pamela Gardens (No. 25), and Stephen Gardens (No. 35). Each building’s name originally appeared in gold on the glass of its front door. These buildings each had a front sidewalk that split and curved around trees, gardens and a water fountain. Each building’s lobby floor was decorated in terrazzo using a different colour and pattern, and included that building’s initials: SG can still be seen in the lobby of No. 15 and PG in No. 25. The buildings had typical 1950s carports at the rear, which have since been demolished.

To the west on Westhumber Boulevard, Esther Lorrie Park provides a spectacular view of the wide valley of the West Humber River. Moon Valley Drive was named by the developer who was struck by the beauty of a full moon over this valley one clear night.

South of Westhumber Boulevard and accessed from Kipling via Rex Gate is Rex Heslop’s “Sunnydale Acres” subdivision, built in the late 1950s. Heslop had built the original “Rexdale” in the early 1950s, east of Islington Avenue, and north of Highway 401.  Most of the houses in Sunnydale Acres made generous use of “Angelstone”, a decorative, exterior cladding used in many homes built in the 1950s and 1960s. Invented by Edward Ratcliffe in 1952, Angelstone was considered the latest in decorative technology and advertised as having “the permanent graciousness of rock ashlar”. In fact, with Heslop’s encouragement, Angelstone had opened a factory on Taber Road, just a few blocks south of Sunnydale Acres.