Many people refer to the entire area of Etobicoke north of Highway 401 as “Rexdale”. Actually, the group of streets east of Islington Avenue and from Highway 401 north four blocks was the original Rexdale, now often called “Old Rexdale”. However, looking back through the history of this area, it did not have a specific name or boundary or early post office, so it’s reasonable to define the boundaries of “Rexdale” today as the Humber River on the east, Highways 401/409 on the south, Martin Grove Road on the west, and the west branch of the Humber River on the north.

The first land grants in the area were made in 1799, although the distance from York (Toronto) and the lack of roads meant that settlement was somewhat slower than in the southern parts of the township. However, the soil here was excellent for agriculture, and by 1881, 90% of the land was under cultivation. Agriculture predominated as a way of life until after World War II when the need for housing and jobs for a growing population resulted in a shift from farming to suburbia.

In an area once covered in farms, the Garbutt/Gardhouse home seen below is the last remaining old farmhouse in the area today. Located at 105 Elmhurst Drive, the smaller section at the rear of the house was built by George and Hannah Garbutt ca. 1864. Their daughter Alice married William Gardhouse of Etobicoke in 1903.  Alice’s father died three weeks after the wedding, and Alice inherited the property. In 1915, Alice and William built the front addition to the house. The property was farmed by William and then his son Arnold until 1952 when it was sold to build the Kipling Heights subdivision.  The farmhouse survived and is protected by a heritage designation by-law. 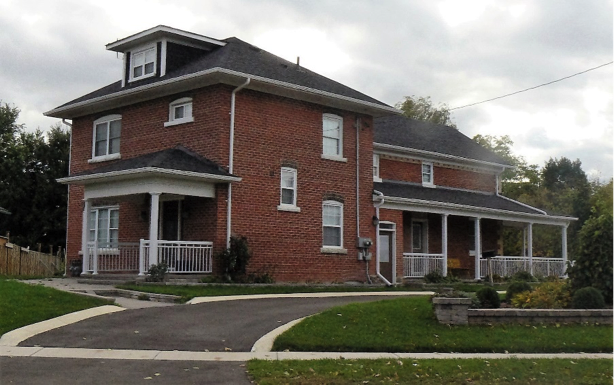 The Garbutt/Gardhouse House residence at 105 Elmhurst Drive in 2016 (Source: Denise Harris)
“Old Rexdale” was developed by Rex Wesley Heslop, who was born on a farm just north of his new subdivision.  After working in construction for awhile, Heslop moved to Michigan where he was a successful car salesman. However, he was soon lured to Northern Ontario by the dream of becoming a rich miner. He was injured in a rock slide in 1947, and returned to Etobicoke, broke.
​
Undeterred, Heslop established Rex Heslop Homes Ltd. First he built 400 homes on cheap land in the Alderwood area that the township had acquired for non-payment of taxes, south of Evans Avenue and west of Brown’s Line. There are streets in that area today named Heslop Drive and Delma Drive (the latter after his wife.) 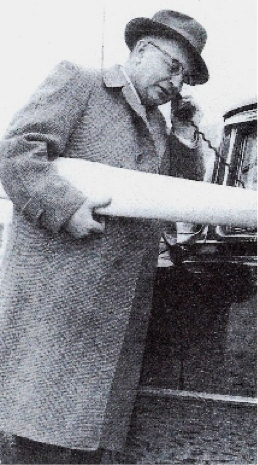 Rex Heslop with one of his two mobile phones (Source: Mike Filey)
Once the cheap lots in Alderwood were gone, Heslop turned his attention in 1950 to the vacant farmland north of the planned Toronto bypass, Highway 401. Malton’s aircraft industry was expanding and Heslop felt their workers would soon need housing.  Etobicoke Township’s Council told him they couldn’t afford to pay for needed services, like roads, water, sewers and schools, without more tax revenue. Heslop made a deal with them that he could continue building houses if he also established new industry in the area at a ratio of 35% industrial assessment to 65% residential.
​
In 1951, Heslop bought the 100 acre Wilbert Wardlaw farm on the east side of Islington Avenue, immediately north of the 401’s route.  He used the house as his office and built new homes on the rest of the lot. The house acted as an unofficial post office from when people started moving into their new homes until December 1952 when the first official Rexdale post office opened on the east side of Kipling Avenue, just north of Rexdale Blvd. 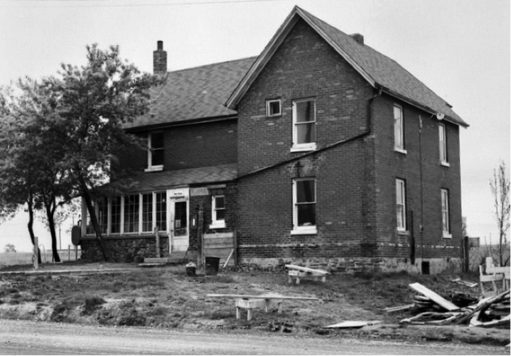 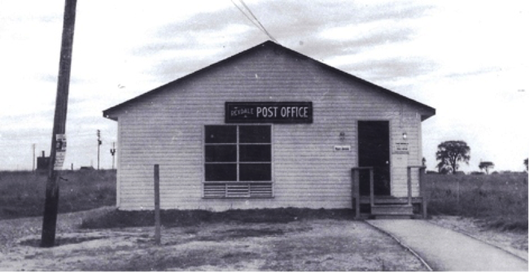 Rexdale Post Office on Kipling Avenue, established December 1952 (Source: Montgomery’s Inn)
On April 24, 1952, 40 employees of the AV Roe Aircraft Company from Malton met with Heslop and worked out an agreement to buy 40 homes on Allenby Avenue for $9-10,000 each - the first homes sold in Rexdale. All were bungalows or 1 ½ storeys.  Many were brick, but some were faced in Heslop’s own distinctive reinforced-concrete slab siding that he had earlier used in Alderwood, invented by Hans Sachau of Humber Bay. Heslop himself bought and lived in a house at 15 Burrard Road.
​
Initially children here were bussed to Humber Heights Public School on Lawrence Av. W.  Elmlea Public School – the first school in Rexdale – opened in 1953 on Hadrian Drive, followed soon after by Rexdale Public School in 1955 on Barrhead Crescent, west of Islington Avenue. 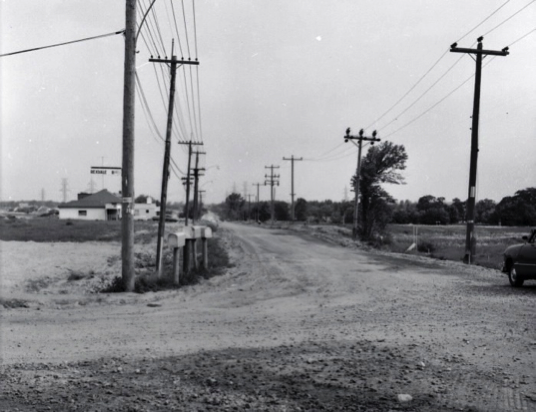 Islington Avenue looking north with Rexdale Blvd. branching off to the west in 1955. In 1956, Rexdale Plaza was built on the empty field on the right. (Source: Toronto Public Library
In 1951, General Electric bought a farm to build a factory on west side of Islington Avenue opposite Heslop’s subdivision.  Soon after, GE decided not to build and sold the property to Simpson-Sears. Sears is still on that site today.  By 1953, with Heslop’s help, 18 industries had bought building sites in Rexdale near Kipling Avenue. The first was Canadian Standards Association (CSA), followed by Angelstone Ltd. who built a plant on Taber Road to manufacture their decorative, exterior cladding used in many homes built in 1950s and 1960s subdivisions.
​
In 1956, Heslop built Rexdale Plaza on the east side of Islington Avenue - the 4th retail plaza in Toronto. It was the major shopping centre for the area, with a Dominion store and all of the major retail chains. Originally open to the elements, it was enclosed in 1972. However, by 2003 many stores had closed and it was no longer meeting the needs of local residents as demographics had changed. The old mall was demolished and redeveloped as an outdoor mall with stand-alone stores and a Wal-Mart Supercentre. 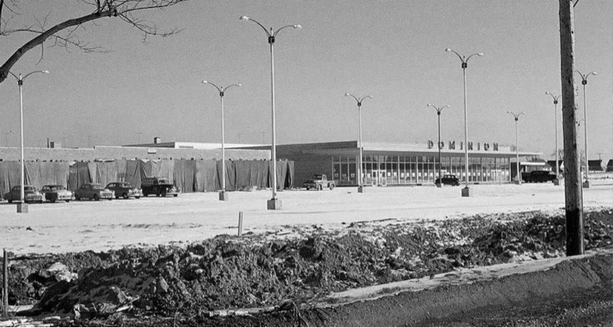 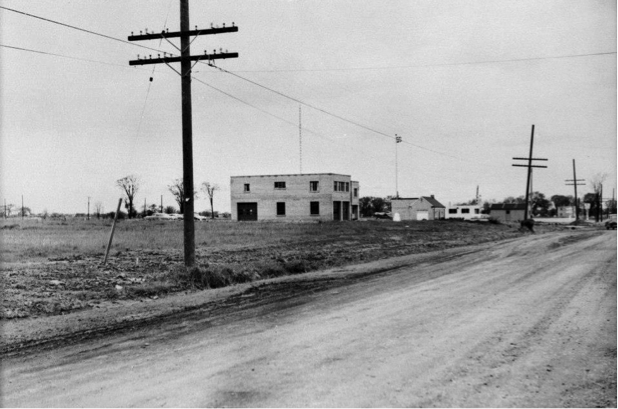 Rexdale Fire Station (now Firehall 415) opened in 1955 on the west side of Kipling Avenue, just south of Taber Road. (Source: Toronto Archives)
Heslop also developed the area referred to as “New Rexdale”, west of Islington Avenue, north of Rexdale Boulevard, and the “Sunnydale Acres” subdivision further north between Kipling and Martin Grove. Eventually Heslop developed over 2000 homes and 70 businesses on 1200 acres of land, and he was a millionaire.  He was nicknamed “Etobicoke’s Horatio Alger, and Etobicoke’s Reeve, Bev Lewis, described the agreement they had made with Heslop as “the salvation of Etobicoke.”

In 1956 Heslop moved on to develop the even larger Delrex subdivision in Georgetown.  By then other developers were building subdivisions across Northern Etobicoke, including Kipling Heights, West Humber Estates and The Elms , to name just a few.
​
Pine Point Park was the first park in Rexdale in 1957. However, its roots go back to 1925 when Cecil White purchased 225 acres of rich valley land, west of the Humber River, for his new Riverside Golf Course. In 1932, White sold it to Bert and Frank Deakin, a father and son who operated it as Pine Point Golf and Country Club for 25 years. In 1932, they built a new club house which was destroyed by fire in 1936. They replaced it immediately with the building that still stands at 15 Grierson Road, overlooking the Humber River valley. In 1950, they reportedly “made a fortune” selling their property to the Ontario Ministry of Highways, which built the new Highway 401 through the middle of this former golf course.  In 1957, 22 acres of that land north of the 401, including the former golf clubhouse, were sold to the Township of Etobicoke who created Pine Point Park, later adding an arena and tennis courts. The attractive former clubhouse is still city-owned, but operated by the Thistletown Lions Club as a function space for rent. 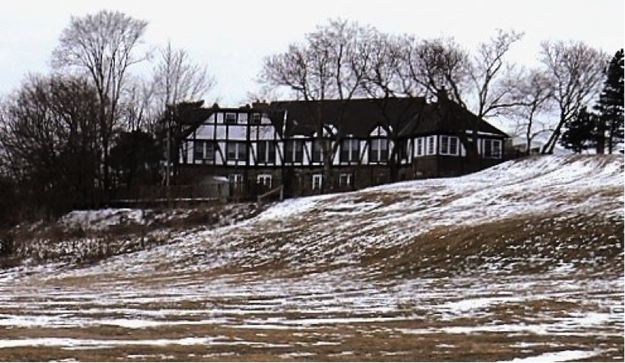 View looking west at Pine Point Park’s banquet hall in 2011, the former clubhouse of the Pine Point Golf Course. (Source: Denise Harris)
Rexdale Blvd. was originally planned by the township in 1833 to be an east/west road, halfway between Dixon Road and Steeles Avenue. However, its builders were forced to move its eastern terminus further south to avoid the significant roadblock caused by the West Humber River and its steep valley walls. The result is the sharply angled street you see today. It was built by the partnership of John McVean and Elisha Lawrence, who named it McVean’s Road after John’s father, Alexander, who lived in Toronto Gore Township near the road’s western terminus.  At different times the road has also been called New Road (because Albion Road was older), Gore Road (because it was the route to Gore Township), and Old Malton Road (because in 1938 Dixon Road became New Malton Road after the airport opened. It was renamed Rexdale Boulevard in 1954.
​
Researched and Written by Denise Harris
Learn About More Neighborhoods