Ca. 1825, George and Mary Moore emigrated from Northern Ireland with their six children: James (aged about 19), John (18), George (5), Jane (1) and two other daughters whose names and ages are unknown.  They settled on the 100 acre Clergy Reserve Lot 11, Concession A, which lay between today’s Kipling and Islington Avenues, running south from Rathburn Road to the northern boundary of Islington Golf Course.  This lot had been leased in 1817 to Jacob Smith, who rented the property to the Moores. George Moore Sr. died soon after their arrival in Etobicoke.  Records show that from 1827 to 1836, James and John paid the clergy reserve agents directly for Smith’s lease on the property. 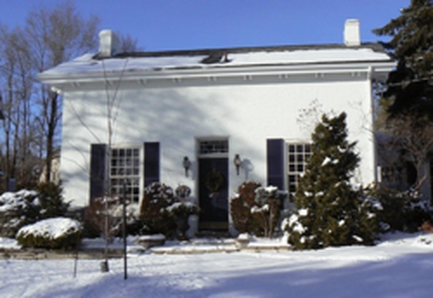 Moore Farm - Built 1842-51.
In 1836, John Moore petitioned to purchase the lot, finally receiving title in 1842. Sometime between 1842 and 1851, he hired Weston architect, William Tyrrell, to design the house that still stands at 11 Great Oak Drive. Tyrrell was an important local architect and builder.  Other examples of his work include the 1844 St. George’s Anglican Church-on-the-Hill; the 1851 Peter Shaver home “Applewood” on The West Mall; William Gamble’s 1849 grist mill on the Humber River at Bloor (“The Old Mill”); and many buildings that still stand in Weston.

The Moore house is a simple 3-bay Georgian farmhouse of 1 ½ storeys made of brick laid in a Flemish-bond pattern, now painted white.  The brick is a light grey colour and was kilned on the property. The eaves have prominent cornice returns at each corner of the house, each  embellished with a quartet of decorative wood modillions.  The front cornice is decorated with nine pairs of small, curved modillions.  The house retains its original eight-panelled front door in a double cross pattern, topped by a transom window of multi-coloured glass. The front door is flanked by tall sash windows with panes of glass in a 12 over 12 pattern.  Original wooden window frames rest on lug sills and are topped with shallow radiating brick arches. A kitchen at the rear was added later in the 19th century and is made of red brick with a contrasting yellow brick radiating arch over the entry door. 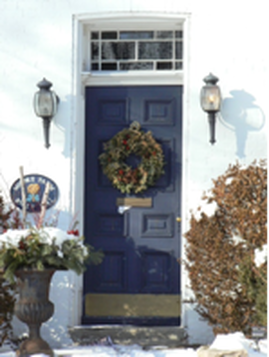 Close up of Front Door (D. Harris, 2011).
John Moore was the head of a successful farm that could be considered an exemplar for the diverse operations typical of 19th century rural Etobicoke. Although he never married, John Moore’s multi-generational household was typical of many at that time, consisting of: his bachelor brother George; their widowed mother Mary; a widowed sister Jane; a widowed brother-in-law William Duncan and his two children Mary Jane & Alan; and a niece Lavinia Moore Brush who was the orphan of another sister.

John shared management of the farm with his brother, George, and they were highly profitable in their chosen profession.  Tax assessment records for 1843 show that their farm ranked in the top 15% in value among the approximately 335 farm properties then in Etobicoke.  At that time, tax was assessed on houses, fireplaces with mantles, barns, other out-buildings, and numbers of horses and cattle.  John Moore was active in the Etobicoke Agricultural Society.  He won prizes at many 19th century agricultural fairs for: Devon cattle, sheep, horses, handmade flannel, knitted woollen socks, flax, hand-woven linen cloth, and vegetables.

Moore was the recipient of the first tax receipt ever issued for Etobicoke, issued in York, and reading, “John Moore has paid the sum of one pound, eight shillings, and six pence, being the taxes on Lot 11, Northern Division of Concession A, for the period of 1820 to 1826 inclusive.”   Moore was sworn in as tax assessor and collector for the entire township of Etobicoke in 1839 after posting a £250 bond. He remained a tax collector at least until 1844.  He was the Returning Officer for Ward 3 in the first municipal election held after the formation of the Township of Etobicoke in 1850.  The Moores were charter members of St. George’s Anglican Church-on-the-Hill when it was established in 1844, and most early family members are buried in its cemetery.

When John Moore died in 1872, ownership transferred to his brother George.  George passed away in 1885, and his great-nephew, Richard Morgan (son of his niece, Lavinia Moore Brush Morgan) inherited the property. It remained in the Morgan family name, with the farm operated by tenant farmers, until the 1940s.  Apart from a 4 acre piece sold in 1942, the remaining 96 acres were sold in 1946 to George P. Wood, an Islington resident, who developed the land over the next decade into the Islington Heights subdivision.   By some miracle, the old Moore farmhouse survived, albeit in a rundown condition.  It was purchased by the current owners in 1979.  They did extensive research on the property and lovingly restored the house so we can enjoy this charming home today.  18 Great Oak Drive is listed on the City of Toronto’s Inventory of Heritage Properties and is the 5th oldest house remaining in Etobicoke.  One block east of the house is a magnificent heritage white oak tree that is estimated at over 150 years of age.  This tree not only gives Great Oak Drive its name, but may well be another reminder of the Moore family’s contributions to Etobicoke’s heritage.