On August 4th, 1914, Robert Home Smith opened his Old Mill Tea Garden restaurant at 21 Old Mill Road.  It happened to be the day war was declared. Smith was promoting his Kingsway Park subdivisions.

Two years later the picturesque stone Old Mill Bridge over the Humber River was opened.  Until then crossing was made by small bridges connected to an island in the river. The high level Bloor Street Bridge came many years later.

Because the Tea Garden restaurant was not open in the winter, many patrons went to the Lambton Mills Inn on the south side of Old Dundas Street just east of the Humber.  It had been Sir William Howland's three storey flour mill built of wood. Smith placed it under the same management as his Tea Garden restaurant for year Round dining and dancing.  Unfortunately it was destroyed by fire.

William John Hicks whose family had one of the three hotels at Humber Bay rented boats at the Tea Garden Restaurant until 1925.  Unfortunately the water in the millrace got too low so he moved downstream to the Wanita Tea Garden at the end of Sunnylea Avenue, East.

On May 10th, 1928, the, Islington Businessmen's Association held their annual meeting at the Old Mill Tea Garden. Col. J.E.L Streight of the Canadian Legion was master of ceremonies. Etobicoke Reeve Ray Price and the township councillors were present as Smith announced he proposed to spend a million dollars a year for the next ten years in developing the area. 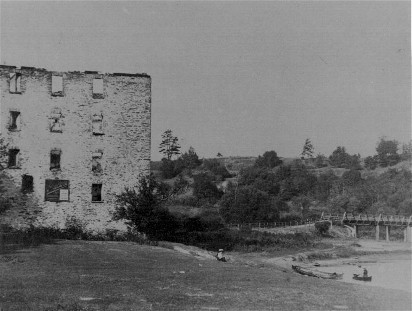 Ruins of the Old Mill.
In 1928 the Administration Wing of the Old Mill Tea Garden was added on the west side as 35 Old Mill Road. It included an apartment, and the Old Mill Post Office until November 25th, 1933, when Kingsway residents began to get home mail delivery. Smith's Toronto Land Corporation was also a tenant and later Hanks &-Irwin, architects.  Outside were the Old Mill Tennis Club, lawn bowling and a tiny golf area.  By 1966 the Old Mill Tower Apartments were built close by, and the play areas were gone. 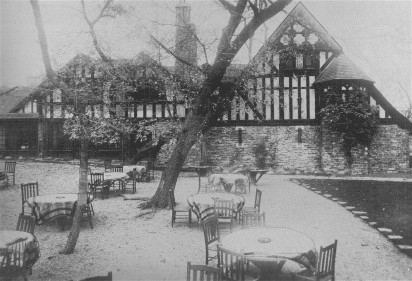 The Old Mill Tea Garden.
On October 21, 2001, the Old Mill Inn and Spa opened an addition on the east side as 9 Old Mill Road. It was proposed that the new 60 room inn be within the Stone ruins of  William Gamble's 1848 flourmill, but it was rebuilt and connected to the "Old Mill" famous for dining and dancing.

Over the years the Kingsway Women's Club, the rotary and Kiwanis Clubs had made the Old Mill home for their meetings.

From 1973 until 1991 the Old Mill was owned by the Hodgson family (William Hodgson was a one time Etobicoke Councillor).

The present owners are George Kalmar and son Michael.

Researched and Written by Robert Given
View More Places