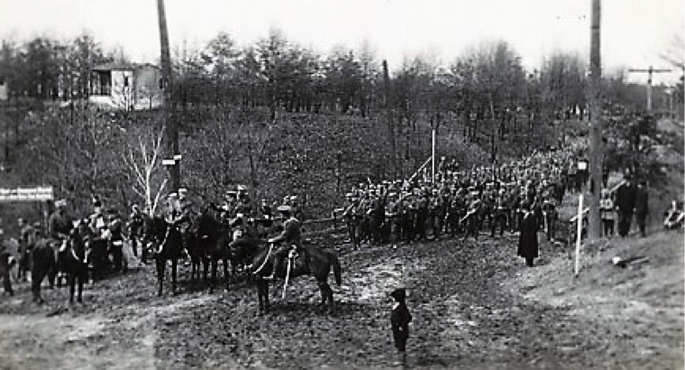 Prior to the First World War, the biggest event held in Toronto to celebrate Thanksgiving was a ‘Sham Battle’ put on by multiple regiments in a bloodless fight for control of Toronto. Up to 20,000 citizens watched this annual event in High Park or the Don Valley. However, the sham battle in this photo was not held on Thanksgiving, but on March 24, 1915 on land straddling the Humber River, adjacent to the Old Mill. Now Canada was invovled in a real war, and these manoeuvres were held to let officers from Exhibition Camp lead their troops under quasi-realistic conditions. In the above scene, the battle is over, and everyone awaits Major Harold Bickford’s decision on which side won. This day he declared the mock battle a draw. After the war, the custom of holding a sham battle at Thanksgiving was discontinued.  Courtesy: TORONTO ARCHIVES