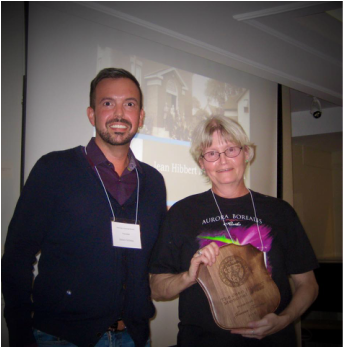 President James Geneau presents the 2015 Jean Hibbert Memorial Award to Joanna Twitchin at the EHS AGM on September 24th, 2015.
At the September 24th Annual General Meeting, EHS presented Joanna Twitchin with the 2015 Jean Hibbert Memorial Award. Joanna is a lifelong resident of Thistletown in northern Etobicoke and always says she has never wanted to be anywhere else.

In 2008, she researched, wrote, and led a walking tour of her neighborhood for Heritage Toronto - a walk she has given every year since. However, while doing her research for the walk, she realized she had too much information for just a walk.

She realized what was really needed was a book! So she continued her research: conducting hours and hours of interviews with local residents; scouring the Richview Library local history room and the Toronto Archives; searching old newspapers; and tracking down photographs for the book, many of which have never been published before.

Her networking skills really shone through during this process as Thistletown residents, past and present, heard about her project and offered to contribute information. Working very quickly, and with the aid of a small loan from the Heritage Etobicoke Foundation, she very soon self-published A History of Thistletown in 2011.

The initial printing of Joanna’s book was 200 copies, and she sold enough books to pay back the publishing loan within a few weeks.  All 200 copies sold out fast, so an additional 50 copies have been printed.  11 copies were sold to the Toronto Public Library and are now in 8 different library branches. This is the first comprehensive book ever published on the history of the Thistletown area.

Joanna’s commitment to Etobicoke and Thistletown has involved more than simply publishing a comprehensive book on the area’s history.  She has been an active board member of the Etobicoke Historical Society for many years as the membership secretary.

More recently, she helped to bring designated “Thistletown” signs to the neighborhood to promote it’s historic significance as a part of Etobicoke’s history.  This was not an easy task.  She had to negotiate and convince many people to embrace this and while often frustrating, she persevered to ensure that the neighborhood she loves was well represented in these new street signs.

In addition, Joanna has been recognized by Toronto and Region Conservation Authority for her environmental efforts in the Humber River valley, as well as received awards from the City of Toronto for her involvement with the Thistletown Community Centre.

It is for these reasons that the 2015 Jean Hibbert Memorial Award was presented to a dear friend of EHS and Thistletown’s biggest fan….Joanna Twitchin!
More Recipients