Busy Islington Avenue Was Once a Sledding Hill 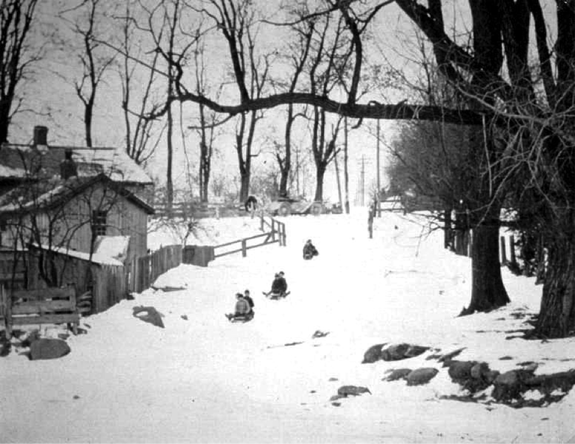 Children sledding into the Mimico Creek Valley, south of Dundas Street West, in the 1920s (Source: Montgomery’s Inn)
Ah, snow!  Glorious snow!  At the first sign of the white stuff, children jump at the chance to grab their sleds and swoop down the nearest hill, over and over again.  This was just as true when this photo was taken in the 1920s as it is today.  However, no one today would dare sled down the hill you see in this winter scene.

You are actually looking at what today would be the busy intersection of Dundas Street West and Islington Avenue.  The photographer is facing north towards Dundas Street, which runs from one side of the photo to the other at the top of the hill. Parked at the top of the hill, on Dundas, is an early 1920s Stutz Bearcat sports car.   Behind the car, the view is straight up Islington Avenue – you can just make out a line of hydro poles leading north on the east side of the street.  The children are sledding south from Dundas down a hill into the Mimico Creek valley.  Montgomery’s Inn is just outside the photo, up a hill to the right.  The old frame house at the left of the photo is on the Montgomery’s Inn property as well.  Its origins are unclear, but it may be the house referred to in the Thomas Montgomery Papers as “the house on the flats” or “the blacksmith’s shop and house.”  It is known that Bessie Irene Fife, a teacher at Islington School, was living in the house until her marriage in 1925 and that the house was considered to be very old even at that time.

Islington Avenue had been opened north of Dundas Street and south of Bloor Street in the mid-1800s, but it remained discontinuous between Dundas and Bloor for over 100 years because Etobicoke’s Township Council decided that building a bridge on Islington over Mimico Creek was too expensive.  A bridge was finally built in 1960 and Islington Avenue was put through.  That old house at the left of our photo was removed at that time, as was all trace of this once-popular sledding hill.