Although few people today are familiar with the community named “Humbervale”, from the mid-1800s to the mid-1900s it was a busy farming area, bound by the Humber River on the east and south, Royal York Road on the west, and Leggett Avenue on the north, and bisected north/south by Scarlett Road.

The story of Humbervale starts with John Scarlett from England who arrived in the Town of York in 1808 with “a considerable fortune.”  Readily accepted as a member of the affluent, Tory upper class, he was able to obtain a position as Chief Clerk in the Inspector General’s Office, a position he held until 1828. In 1810, Scarlett married Mary Thomson, daughter of UEL Archibald Thomson of Scarborough, further solidifying his position in society. He and Mary had six children: Edward (b. 1811), Mary (b. 1815), John A. (b. 1819), St. George (b. 1820), Elizabeth (b. 1823), and Samuel (b. 1826.) 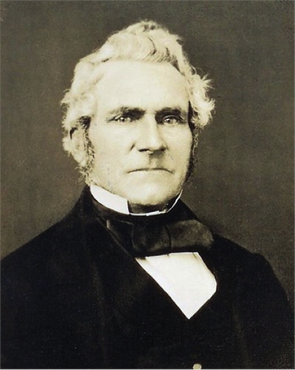 John Scarlett (Source: Toronto Public Library)
As early as 1809, John Scarlett began purchasing timber land along the Humber River.  By the 1830s, he owned a lumber yard, grist mill, saw mill, planing mill, distillery, lumber store and brickyard in Etobicoke and York Townships.  In 1860, Scarlett and his four sons owned all of the land along both sides of the river between Dundas Street West and the Town of Weston.
​
John Scarlett lived in a house named “Runnymede”, north of Dundas Street West and east of today’s Runnymede Road, and built a racetrack on his property called “Simcoe’s Chase”. 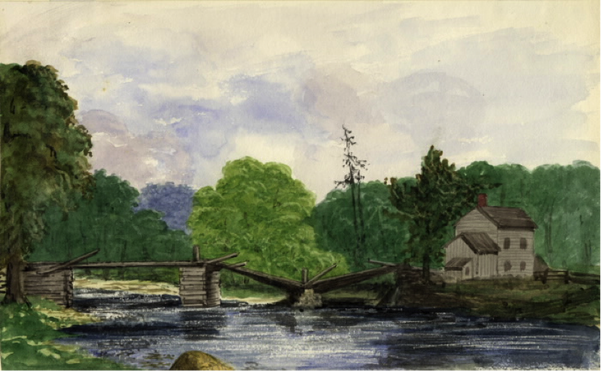 Painting of Scarlett’s mill and bridge over the Humber River on Scarlett Road in 1871, by William Arthur Johnson (Source: Toronto Public Library)
​The road that ran through the properties of John’s sons is still called Scarlett Road to this day. By 1860, the unmarried eldest son, Edward, owned 400 acres of land.  He was a lumber merchant, a business he operated in partnership with his brothers, Samuel and John.  Around 1865, Edward built a new house for himself at what is now 1 Heritage Place. This house is an excellent example of vernacular architecture in that it is not likely the work of an academically-trained architect, but rather represents the efforts of a highly skilled craftsman with extensive experience in his trade. It is a mixture of Regency, Italianate and Gothic architecture. 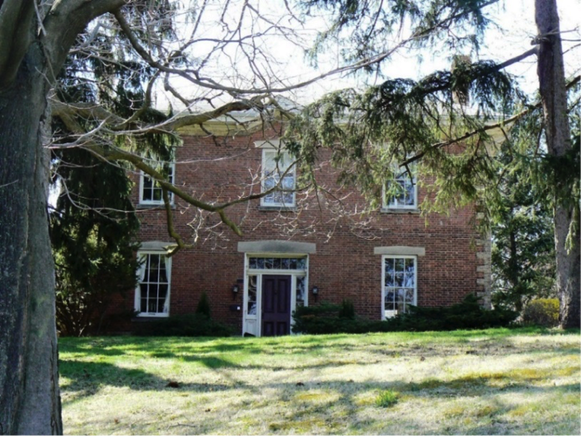 Edward Scarlett’s house at 1 Heritage Place in 2014 (Source: Denise Harris)
​Samuel and his wife Emma built a large Georgian style home of stucco over frame called “Woodlands”, south of Richview Side Road (now Eglinton Avenue West) on the west side of Scarlett Rd. All six of their children were born in this house between 1857 and 1869. 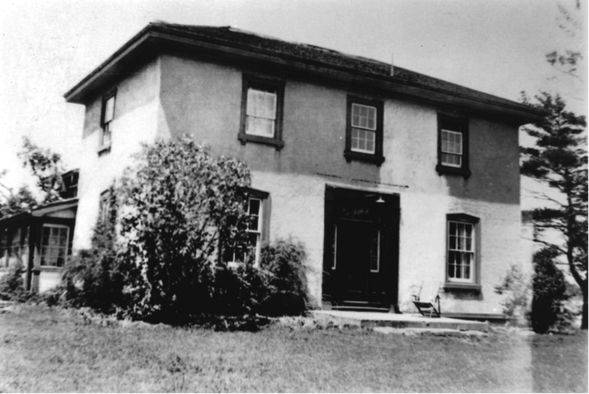 Samuel and Emma Scarlett’s home “Woodlands”, now demolished. Source: Montgomery’s Inn
​John A. and his wife Maria owned the land which straddled Scarlett Rd. just south of the Humber River in York Township. St. George had the farm north of Edward where he and his wife Alice built a red brick Georgian-style home. However, St. George went bankrupt trying to develop his land and he was forced to move his family in with Edward in 1864.

By the 1870s, the Scarlett sons were selling off their properties, and the land was purchased primarily for farming. As the owners moved into the 20th century, smaller-scale market gardening became very common throughout that area.  The Chapman family, for example, became market gardeners and poultry breeders ca. 1865.  Their farm was on the west side of Scarlett Road, north of Richview Side Road where Chapman Road, Chapman Creek and Chapman Valley Park all bear this family’s name today. In the photo below, Thomas Chapman, son of the original settlers, John and Mary Ann, has loaded his farm wagon with ripe tomatoes and hooked up his 1936 Chevrolet sedan, ready to deliver his produce to the Campbell Soup Company on Third Street in New Toronto.  Other streets named after local farmers are La Rose, La Rush, Crane, Leggett and Kingdom. 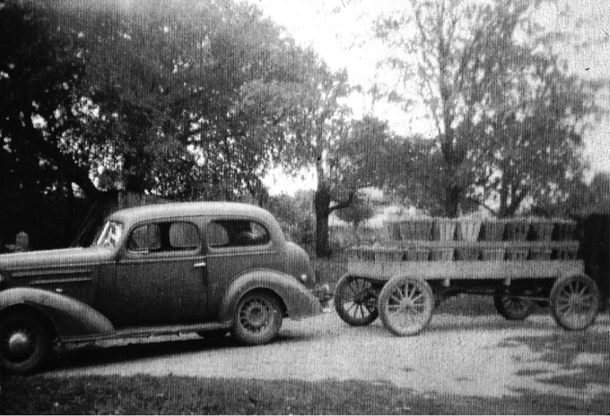 Thomas Chapman’s wagon loaded with ripe tomatoes destined for the Campbell Soup Company in New Toronto in the late 1930s. (Source: Montgomery’s Inn)
In 1889, Cornelius Delworth bought a parcel of land on the north side of Richview Side Road to expand to his downtown nursery business. His son Thomas bought the Etobicoke business in 1906 to grow vegetables. After World War I, Thomas’ son Cecil joined his father and shifted the business to green-house grown cut flowers. Operating as T. Delworth & Son Wholesale Florist, the business thrived until the 1960s when the next generation of family members - father and son Frank D. Reeves and Frank T. Reeves - realized that the new “Garden Centre” concept was the way to go.  They renamed the business “Plant World” in 1972 and expanded to five acres of land. Paul and Kurt Reeves - Cornelius’ great-great-great grandsons - joined the firm as the sixth generation of family owner-operators.

Plant World in 1970 (Source: Plant World)
​Humbervale had several small industries in its day, thanks to the sand and gravel deposits along the Lake Iroquois Shoreline, which rises as far north as Highway 401 along the Humber River valley.  John Ellins started Ellins Sand and Gravel in the 1920s. Atlas Block Company and Argo Block both operated in Humbervale. In 1902, the Humber Power and Light Company built a steam-powered electrical generating station west of Scarlett Road on the south side of Edenbridge Drive.  However, it could not compete with power from Niagara and ceased to operate in 1905.  In the early 1900s, a garbage dump and incinerator were built on Edenbridge Drive which operated until the late 1960s. An eclectic variety of small businesses included: Albert Clark’s wood working factory which made display booths; Sparrows’ Kennels where they bred pedigreed Airedales and Toy French poodles (25 of which drowned during Hurricane Hazel); Smith’s Riding Stable; Riverside Farm Dairy operated by the Kingdom brothers; and on Silver Creek, a tributary of the Humber River west of Scarlett Road, the “Silver Creek Baths” opened in the 1940s and operated for two decades. 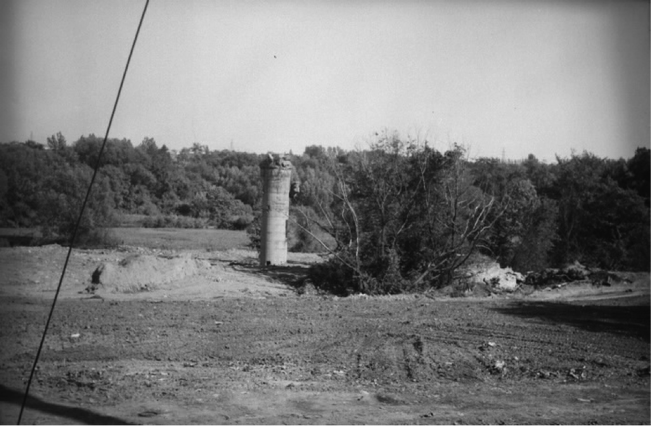 Ruins of chimney from steam plant built by Humber Power and Light Co. to generate electricity 1902-5. Photo 1952. (Source: Toronto Public Library)
​In 1910, a group of West Toronto businessmen from the Knesset Israel Congregation bought six acres of land for a Jewish cemetery.  It is located on a ridge on the east side of Royal York Road, north of today’s Edenbridge Road. This cemetery still operates as Lambton Jewish Cemeteries, managed by the Roselawn Lambton Cemetery Association. 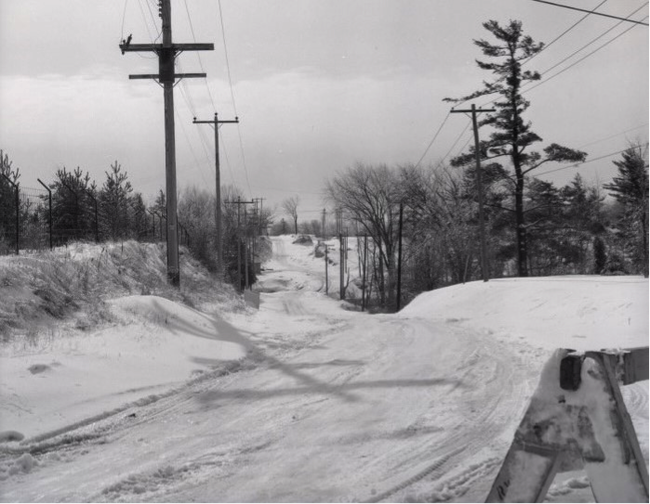 Royal York Road looking south from North Drive in 1939. The Jewish cemetery is located on the left at the top of the hill in the far distance (Source: Montgomery’s Inn)
​Humbervale only had two local stores.  Smiths’ Store was located on the east side of Scarlett Road at the bridge over the Humber. Most people remember the surprise candy grab bags that Mrs. Smith assembled and sold for a penny each. You might find the bag you picked contained a black ball and some jelly babies this time, and then a piece of licorice and 2 candy strawberries the next time. The suspense kept the kids coming back! The second store was operated by the Wright family out of their home just north of Humbervale. They sold fresh meat, fruit and vegetables, plus packaged groceries, and basic cooking and cleaning products.  However, you couldn’t visit the store: you phoned in your order and it would be delivered to your home the same day.

Frederick Thomas James and his wife Margaret Rumney James built Etobicoke’s beautiful James Gardens, which covers 8.5 hectares of hills, valley and forest beside the Humber River, south of Edenbridge Drive. Frederick was a highly successful Toronto fish merchant. He purchased most of his land from his father-in-law, Thomas Rumney, in 1908. He then added to it with purchases of adjoining land from developer Robert Home Smith.
​
Frederick and Margaret first built a red-gabled summer cottage for family weekends. In 1927 they moved it to a new site in the southeast corner of the property. It was replaced by a large estate home made of stone quarried from the Humber River valley. This house, too, had “Red Gables,” giving the house its name. 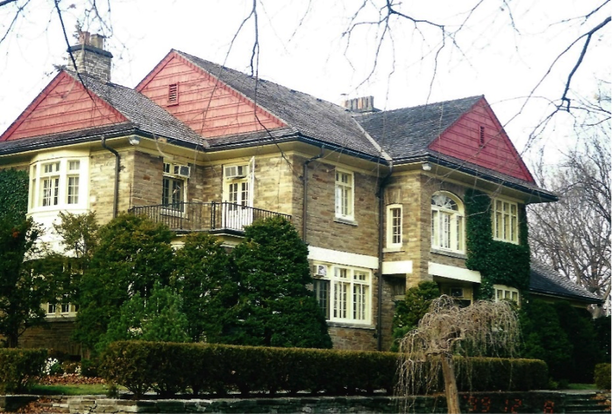 The James family home, “Red Gables”, on Edgehill Road in 2008. View is of rear of house, which overlooks the Humber River valley and James Gardens. (Source: Denise Harris)
The James family transformed the land in the valley below their house into a gardener’s masterpiece. Much of the area had been swampy, but it was changed into Frederick’s ideal of perfection with picturesque gardens, waterfalls, terraces, lawns, nature trails, ponds and rockeries. Believing that the gardens should be shared beyond their family, a sign on a brown gate invited other garden lovers to enter any time except Sunday.

Frederick died in 1949 and Margaret in 1954. The property had to be sold to settle the estate. A deal was struck for Metro Toronto to purchase the property for $150,000 in 1955. The deal almost fell through because the recently-formed Metro Toronto Parks Department was not yet equipped to take on this large area. After a private solution fell through, Etobicoke Township agreed to manage the park for $1.00 a year until Metro could take it on, which it did in 1962.
​
Today the gardens are open daily. Thousands of flowers, including over 75,000 tulips, are planted annually. Designs and materials are changed annually in the rock gardens and under the well-pruned trees and shrubs. Part of the James’ house is now a community centre. 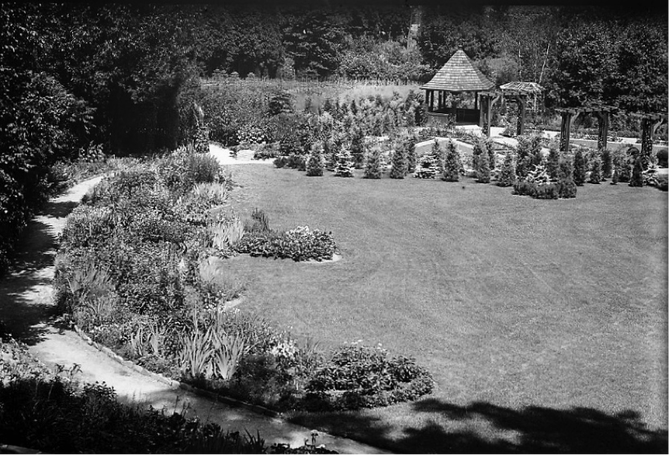 View from “Red Gables” of James Gardens in the Humber Valley in 1928 (Source: Toronto Archives)
Richview Side Road had always ended at Scarlett Road because there was no bridge over the Humber River. Traffic going eastbound had to drive north to Lawrence Avenue West or south to East Drive to continue their journey. Metro Toronto decided to connect the two roads with a new bridge. However, Richview Side Road did not align with Eglinton Avenue West. Richview was diverted slightly south at its east end, and Eglinton Avenue West was curved further north at its west end, and they met at a new bridge over the Humber River that opened in 1971. The remaining stub of Richview Side Road at its east end remains as a cul-de-sac west of Scarlett Road.

​Humbervale’s first and only church began in 1892 when William and Mary Jane Graydon donated a 50 foot by 100 foot piece of land on the east side of Scarlett Road, just north of Edenbridge Drive. Initially the community erected a simple frame non-denominational “Sabbath School”, and It officially became a Methodist church in 1893, and then a United Church in 1925. 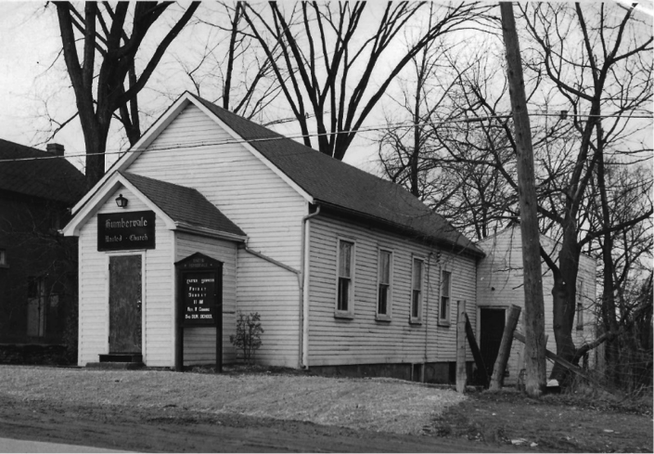 Humbervale United Church on the east side of Scarlett Road, north of Edenbridge Drive. (Source: Montgomery’s Inn)
After Hurricane Hazel in 1954, the land where the church was located was declared a flood plain. In 1958, the congregation bought a new piece of land at 1447 Royal York Road, north of La Rose Avenue. Initially they held services in a portable on the site until their new church opened in 1960. Today, the only reminder of the name “Humbervale” in the area is the sign on this church.
​
Researched and Written by Denise Harris
Learn About More Neighborhoods