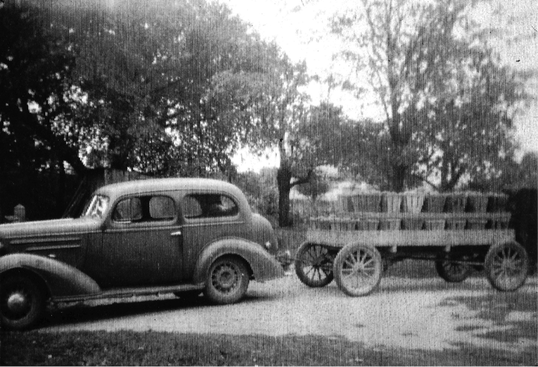 By World War II, the Chapman family had been market gardeners and poultry breeders in the Humbervale area of Etobicoke since 1865. Their farm was located on the west side of Scarlett Road, north of Eglinton Avenue West, where Chapman Road, Chapman Creek and Chapman Valley Park all bear this family’s name today. In this photo, Thomas Chapman, son of the original settlers, John and Mary Ann, has loaded his farm wagon with ripe tomatoes and hooked it up to his 1936 Chevrolet two-door sedan, ready for delivery to the Campbell Soup Company on Third Street in New Toronto. Campbell’s started making tomato soup there in 1931, and asked local farmers to grow tomatoes for them for a flat rate per acre – a local food network that would be envied by many today. (Courtesy: Montgomery’s Inn)