In 1620, John Howland arrived at Plymouth Massachusetts aboard the Mayflower as a Pilgrim Father. In 1830 descendant William Pearce Howland arrived at Cooksville, Ontario to become the only American-born Father of Confederation. A provincial plaque may be seen in Confederation Square on the south side of Dundas Street west of Hurontario Street. It states that in the 1840's his extensive business interest became centred in Toronto!

​On July 21, 1840 Thomas Cooper gave Howland a 21 year lease on several properties on the west side of the Humber at Dundas Street. In 1844 Cooper formally rented his east side mills to Howland for 40 years. Howland built a big five-story flour mill on the south side of Old Dundas just east of the Humber. On the north side he built his general store and post office, and to the east of that the Lambton House Tavern which has had its exterior restored. 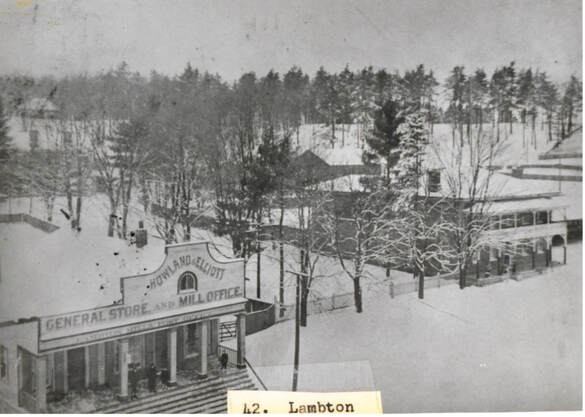 A snowy, wintery view of Howland and Elliott's General Store and Mill Office in 1899, with Lambton Hotel just next door. The building that sits just between the General Store and the Lambton was the Howland's home. To the right, behind Lambton was the Toronto Suburban Railroad's barn. Up on the hill in the distance to the left was the Lambton Park Pavilion. (City of Toronto Archives Fonds 501, File 1.)
William Pearce Howland took his brother Peleg into partnership in 1855 and then Peleg gave brother Frederick Aiken Howland part of his share. In 1886 Frederick became sole owner and he formed a partnership with one-time teacher Thomas Elliott from Bolton. A fourth brother, Henry Stark Howland, built a flour mill upstream at Kleinburg in Vaughan Township in 1852. It is believed the Howlands at one time had mills at Lambton, Kleinburg, Waterdown and St. Catharines. H. S. Howland served on Vaughan Township council for eleven years, being six years as reeve and three as county warden. He founded the Howland Wholesale Hardware Company, was vice-president of the Imperial Bank of Canada and of the Toronto, Grey and Bruce Railway.

Peleg had similar interests. He helped found the Dominion Bank being its vice-president, and later served as president of the Imperial Bank of Canada.

William Pearce Howland began taking an active role in politics in 1848 when he identified with the Reform Party supporting J. H. Price against the Conservative candidate in our riding of West York. Howland represented West York 1857-1867 in the Legislative Assembly and in the House of Commons after Confederation. He served as Minister of Finance 1862-3 and 1866-7, as Receiver General 1863-4, as Postmaster General 1864 and the First Minister of Inland Revenue in 1867. At the London Conference in 1866 Howland was one of the three delegates from Canada West. He was Ontario's second Lieutenant Governor 1868-1873 and in 1879 was created K.C.M.G. Sir William Pearce Howland. He was president of the Toronto Board of Trade about when engineers were studying the proposed ship canal up the Humber River to Georgian Bay. The idea was well thought of by the mercantile men of Chicago, Milwaukee and Oswego. He was also founder of Confederation Life and a director of the Canada Land Credit Co.

For a retreat and probably additional income Sir William had his Thorncrest Park farm on Islington Avenue at Rathburn Road. For farm manager he had, it is believed, John Clayton proprietor of the Claytons of Islington and Lambton. Advertising executive Marshall Maclagan Foss acquired Thorncrest Park and commissioned Eugenio Giacomo Faludi to prepare a plan for the 100 acres. Mary Elizabeth Foss gave the street names like Pheasant Lane and The Wynd while E. C. S. Cox designed many of the homes. The Howland home still stands as one of Etobicoke's heritage buildings. [Demolished 1999]

Sir William had two sons who served as mayor of Toronto. William Holmes Howland was born at Lambton in the family home behind the general store and Lambton House Tavern. He was president of the Hand-in-Hand and the Queen City Fire Insurance Companies and a member of the syndicate seeking CPR construction contracts.

Historian Desmond Morton has said "Toronto's first reform mayor, William Holmes Howland, made the city Toronto the Good. He closed up saloons, created the morality squad and made the city a blue-law landmark for North America." We in Etobicoke should remember William Holmes Howland as the founder of the Victoria Industrial School to keep 8 - 14 year old sons of foolish mothers and careless or unsympathetic fathers out of trouble and out of jail. The boys lived in two story brick cottages with a matron an instructor in each cottage. The school complex included the shop building where the boys baked bread, learned tailoring, carpentry etc., plus the Neil Currie rink, John Herbert Mason pool and the Howland Memorial Gymnasium Hall donated by Hart Massey.

​This big school complex was to the west of Royal York Road north of Mimico Station. It was opened on May 16, 1887 by the Marquis of Lorne who arrived on a specially decorated train. George G. Gould was one of the instructors. Mimico residents put the school, the reformatory and the asylum out of their minds because they knew these three facilities were not really in Mimico! Oliver Aitken Howland, a lawyer, was mayor of Toronto 1901-02 and noted the city's budget exceeded the province's. Chief Justice William G. C. Howland donated a magnificent portrait of his grandfather Sir William to hang in the restored Lambton House Tavern.

​Researched and Written by Bob Given.
View More People