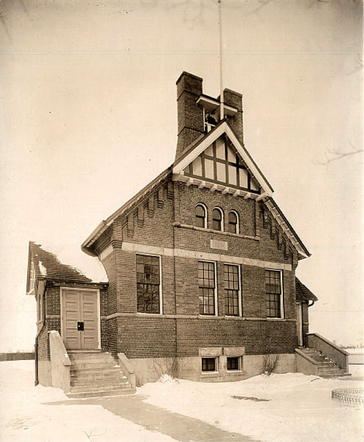 In 1910, when the Ontario and Quebec Railway decided to expropriate part of School Section 12’s schoolyard in Alderwood, the school’s trustees made an arrangement that the railway would pay for a new school site, erect the new school, and donate $150 in cash for the inconvenience. E.J. Lennox, designer of Casa Loma and Toronto’s Old City Hall, was hired as architect, and the result, seen above, was certainly one of the most attractive “one room schoolhouses” ever built in Toronto. Located on the north side of Horner Avenue, west of Gamma Street, this school was the beginning of Franklin Horner Public School, which closed in 1984 and is now a very active community centre. Over the years, several additions and alterations were made, and today the only traces of the original school can be seen in some white stone banding and red brick walls at the rear of the building. (Courtesy: WIKIMEDIA COMMONS)