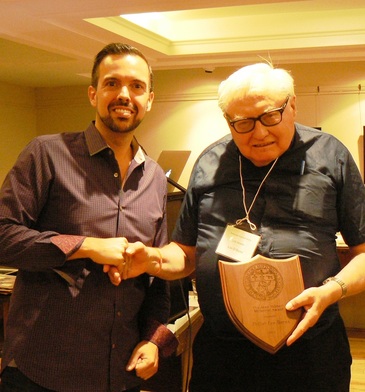 President James Geneau presents the 2014 Jean Hibbert Memorial Award to Father Leo Burns at the EHS AGM on October 23, 2014.
At the October 23rd Annual General Meeting, EHS presented Father Leo Burns with the 2014 Jean Hibbert Memorial Award.  This year's second recipient is someone many agree is long overdue in receiving this award. Father Burns' dedication to history began when he was a young history teacher at Michael Powers High School when he read about an upcoming town hall meeting.  That meeting was about the fate of Montgomery’s Inn.  Upon attending the meeting, he immediately stepped up to the challenge and joined the core group dedicated to preserving the inn.  Because he took the vows of poverty upon entering the priesthood, he was unable to provide any monetary help such as mortgaging a home.  After all, priests are not allowed to hold property.

That didn’t stop him, he volunteered in other ways.  Once Montgomery’s Inn was saved and the Etobicoke Historical Society was formally established, he went on to serve a term as and EHS president.

Father Burns is also quite active in other historical and heritage societies and organizations such as the Ontario Historical Society and the York Pioneer and Historical Society, usually holding directorship positions.  Each summer, he is a regular historian interpreter at Scadding Cabin and he is a past President of the York Pioneers Historical Society.  In fact, he is one and is one of only two honorary Presidents as well.  Last March, he turned 80 years old and remains one of the few remaining people who helped to save Montgomery’s Inn from demolition and the formation of our wonderful society.

For his tremendous work in the founding of the society and saving the inn, along with his life-long dedication to preserving the heritage and history of Etobicoke and Toronto, we are please to present the 2014 Jean Hibbert Memorial Award to the Reverend L.D. Burns.