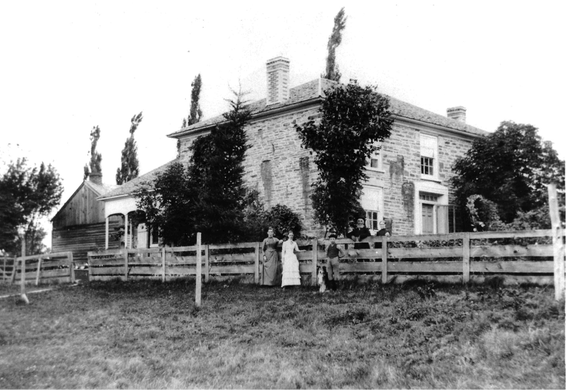 The Barker family of Thistletown in 1890 at their farm “Llewelyn Hill” on Islington Avenue about where Thistletown Collegiate is located today. Left to right are: the “hired woman”; children Sarah Jane and Albert Barker; and parents Andrew and Mary Ackrow Barker. (MONTGOMERY’S INN)
It was a common story in Etobicoke after World War II: the Depression, followed by six years of war, created a pent-up demand for housing which was exacerbated by the Baby Boom. Farmers’ sons found they could make more money, with less uncertainty, working in industry and offices than by farming. Developers were offering to buy farms at unprecedented high prices. Over time, one old farmhouse after another disappeared from the landscape.

However, one heritage farm house in Thistletown became a notable exception to this pattern. In 1955, it was rescued and rebuilt on a new site at 85 Yorkleigh Avenue, southeast of Royal York Road and Lawrence Avenue West.

Aaron Barker and Mary Calvert came to Canada from Yorkshire in 1832 with their children. After living awhile in Richmond Hill, they moved to Etobicoke in 1841 and leased a 100-acre farm on the west side of Islington Avenue, south of the West Humber River. They purchased the property in 1855 and soon after built the large, two-storey house of Humber River stone seen in the above photo.

Ownership of the house – known as “Llewellyn Hill” - passed through the Barker generations, from Aaron and Mary, to Andrew and Mary, to Albert and Nellie, and to Grant and Nita. Many of their siblings also purchased and operated farms in the area, and the Barkers ultimately owned over 500 acres of farmland and several houses in Thistletown village. Grant and Nita sold the original farm with its stone house to a developer, and in 1955 the house was scheduled for demolition so Thistletown Collegiate could be built on the site.

Meanwhile Don and Elizabeth Strathdee -  soon to be married teachers - had been collecting early Canadian furniture and were looking for an old house to move to a two-acre vacant lot they had purchased on Yorkleigh Avenue.  After hearing about the impending demolition of Llewellyn Hill, they rushed to see it and fell in love with it instantly. The developer agreed to sell them the house for $500, as long as it was removed from the property within two weeks. They decided to use the stone and wood from the house to build a smaller home on their lot. They found an architect willing to design a new house using old materials. A demolition expert dismantled the house, piece by piece, labelling every part. It took 35 truckloads to move the house, including 200 tons of stone, to the new location within two weeks.

The work of rebuilding began in June 1956. Don and Elizabeth married a month later, and moved into their new home on Thanksgiving weekend. The new house is a bungalow, but the major rooms, including the farmhouse kitchen, were left intact. The old windows and front door were also used in the new house, capturing the feel of the original home in a beautiful treed setting, hidden from public view.