Over 157 years ago, the Agricultural Society of Etobicoke held their Spring Fair and Cattle Show in the village of Islington, then called Mimico.  Prizes totalling $164 were awarded for horses, cattle and implements at a dinner held at Mr. Smith’s Inn, on the southwest corner of Dundas and Islington.  The exhibit portion of the fair was held, as usual, in the Mimico Creek valley behind Smith’s Inn.  People attended and competed not only from Etobicoke, but also from Toronto, Yorkville, Toronto Township (Mississauga), Brampton, Vaughan, Cooksville, York Township and King. 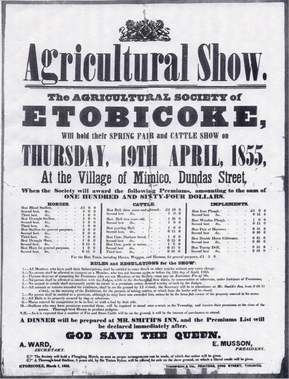 In 1855, the economy of Etobicoke was based on agriculture, with about 60% of the land under cultivation; by 1878, that number would increase to 90%.  The focus was primarily on wheat, barley, oats, beef cattle, dairy farming and fruit growing.

The Home District Agricultural Society was formed in 1830 to support farmers. Then, in 1847, the Upper Canada Agricultural Society began – later the Ontario Agricultural Society.  These organizations assisted in the importing of better quality seed and purebred livestock.  They also started annual spring or fall fairs where farmers could exhibit their produce and compete for prizes. Over time, most townships started their own societies and fairs, just as Etobicoke did.

​These fairs were so important to the community that the results of the Etobicoke fairs were published in The Globe newspaper.  John Moore of Islington was a frequent fair competitor.  His 100 acre farm ran between Islington and Kipling Avenues, and south from Rathburn Road to the northern boundary of today’s Islington Golf Course.  His house still stands at 18 Great Oak Drive. 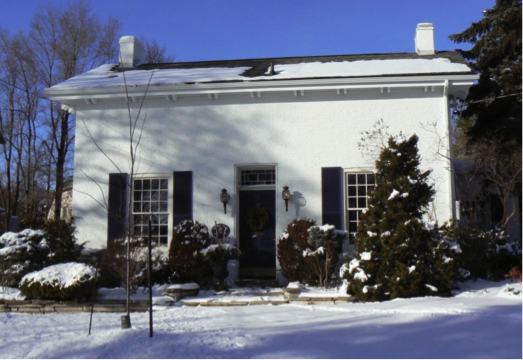