About 1828, Abraham and Ann Ward emigrated from Ireland to Etobicoke with their eight children.  In 1829, their son Andrew bought a 77 acre lot on the northeast corner of what today would be Dundas St. W. and Shaver Av.  He and his wife Martha Culham built a house (pictured below) with two foot thick stone walls covered with rough cast stucco. 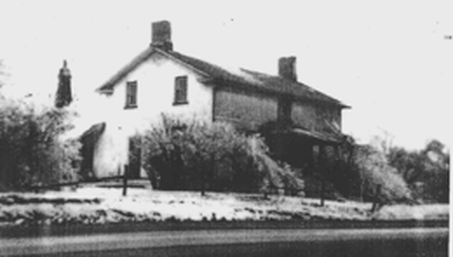 Andrew Ward House – built ca. 1830; demolished 1952 (Source: Toronto Archives)
In 1830, Andrew’s brother Joseph purchased a lot and built a house on the south side of Dundas on the east side of the future Highway 27.  In 1839, Andrew also bought 100 acre Lot 17, Concession 1 North Division, where the house at 3904 Bloor St. West sits today.  Then, in 1847 he bought a third lot near Kipling and North Queen, beside a property that Joseph had bought the previous year. Between them, the two brothers owned almost 500 acres of land, a significant amount for that time period.

In 1856, Andrew’s eldest son, John, married Isabella Shaver, daughter of George and the late Isabella Shaver, who lived at Lot 18, Concession 1 North Division, immediately west of Lot 17 owned by Andrew Ward.  After their marriage, John and Isabella lived on Lot 17 in a frame house that either they built or was already on site, although the property remained in Andrew Ward’s name.

By 1860, Andrew and Joseph were in financial difficulty and their properties were heavily mortgaged.  In 1863, the mortgagees foreclosed, resulting in the sale of all five Ward properties to other parties by 1864. 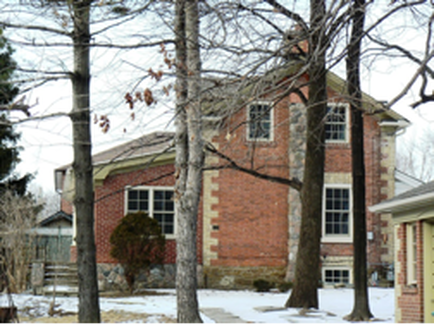 The John Ward Farmhouse.
Joseph and his wife Elizabeth moved to Iowa and remained there for the rest of their lives.  Andrew and Martha remained in Etobicoke, living with their married daughter, Harriet McKenny.   John and Isabella, however, were able to keep living on Lot 17, thanks to the close relationship between the Wards and George Shaver.  Not only was John Ward the son-in-law of Shaver, but also two of Shaver’s sons had married two of Andrew Ward’s daughters, and Shaver’s nephew had married a third Ward daughter. As a result, in April 1864 George Shaver bought Lot 17 back from the person who had acquired it after the bankruptcy had been resolved.

Based on tax assessment records that show a significant increase in 1875, it appears that was the year that Wards’ frame house was replaced by the brick house now standing at 3904 Bloor St. W.. That year George Shaver also appointed John Ward as agent to act on his behalf regarding matters related to the property. However, the house remained in Shaver’s name until 1884 when he finally transferred ownership to his daughter, Isabella Ward.
​
By 1891, John and Isabella had moved to a house in the Dundas and Ossington area of Toronto, and hired tenants to manage their farm.  John and Isabella had four children: Charlotte in 1859, Frederick in 1860, Harriet in 1862, and George in 1871.  In 1910, after Isabella died, the ownership of Lot 17 was transferred to son Frederick and daughter Harriet McTavish, jointly. After Harriet died in 1929, the property was legally subdivided into two parts, one owned by Harriet’s heirs and the other by Frederick, with Frederick retaining the half that included the house.  In 1942, after Frederick died, his portion with the house was sold out of the Ward family. 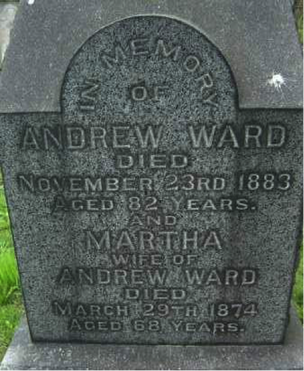 Headstone of Andrew and Martha Ward in Islington Burying Ground - Source: www.candianheadstones.com
Over the years, subsequent owners have subdivided this property, leaving the house on one third of an acre today. Set well back from the street, and surrounded by trees, it’s easy to miss this house as one drives past on Bloor St. W. today. However if you have a few moments for a second look, you will see a fine example of a two-story Georgian farmhouse.  It’s made of red brick masonry, with quoins and window lintels of contrasting yellow brick. There are decorative wooden cornices under the eaves, with strings of decorative yellow brickwork underneath. The matching chimneys on opposite sides of the house are bricked in a unique interlocking pattern of red and yellow.  The foundation is made of local river stone. The front door, which faces west and cannot be seen from Bloor, is reported to be the original eight-paneled door with sidelights.  The property is listed on the City of Toronto’s Inventory of Heritage Properties.

Many members of the Ward and Shaver families are buried in Islington Burying Grounds on Dundas St. W., including Andrew, Martha, John and Isabella Ward and George Shaver.