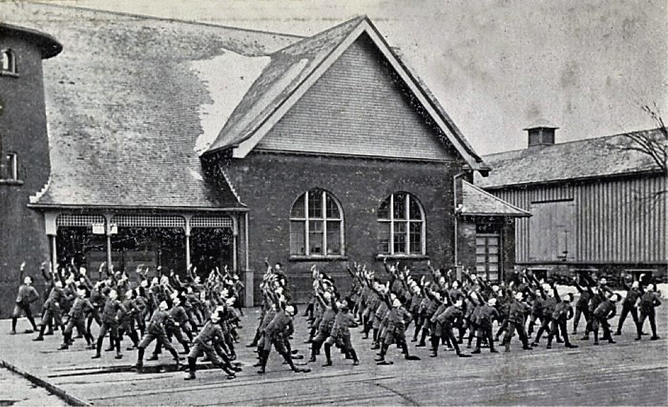 Physical Drill at the Victoria Industrial School for Boys in 1898, once located northwest of the Judson Street and Ourland Avenue intersection. Courtesy: TORONTO PUBLIC LIBRARY
The Victoria Industrial School for Boys officially opened to great fanfare on May 16, 1887 when a six car train arrived at Mimico, festooned with flags and flowers, and carrying the Governor General, Lord Lansdowne, and 350 other dignitaries and citizens.

This new residential school was built “to provide a place where vagrant boys can be taken care of, trained, and improved, instead of being sent to gaol to be hardened and made vicious among older criminals.” Superintendent W.J. Hendrie made it clear that the school differed from a reformatory in that there were no bars or cells like a prison. The boys were not criminals, but needed help by “acquiring a home feeling and habits of industry and obedience in the kindly atmosphere of the School.” It was the first institution of its kind in Canada.
The students were typically aged 10 to 14, and came to the school through the Toronto School Board Truancy Department. The boys lived in 3 or 4 storey “cottages” where a matron acted as “mother” and a guard as “father”. The guards also taught the boys trades, such as carpentry, printing, farming, baking and tailoring. Eventually the school had six cottages, a farm with greenhouses, a hospital, a school with an assembly hall, a skating rink, a gym with a swimming pool, workshops and an administrative building.

Operated on a military model, the boys wore gray and red uniforms, and each day was highly structured, typically consisting of 9.5 hours of sleep, 4.5 hours of work, 3.5 hours of school, 3 hours of recreation/play, 2 hours in the cottage and 1.5 hours for meals. Teachers were provided by the Toronto School Board, and on Sundays the boys attended local churches.

However, attitudes and methods for dealing with problems can change over time. The school gradually became a place that housed more hardened boys with criminal histories. In 1928, Victoria Industrial School was renamed Mimico Reform School, with all of the criminal connotations that new name implied. There were accusations that the school was “barbarous and antiquated.”  In October 1934, provincial Minister of Welfare, David Croll, announced that the Mimico facility was being closed and all boys transferred to the Bowmanville Boys’ School, thereby removing “a largely artificial distinction between types of youths who have been sent to one or the other institution.” By December, the facility was vacant and the property turned over to the adult Ontario Reformatory, which had been located to the west of the school since 1913, and which has its own story to tell one day.