Toronto’s Elite Explored the Countryside with the Toronto Auto Club 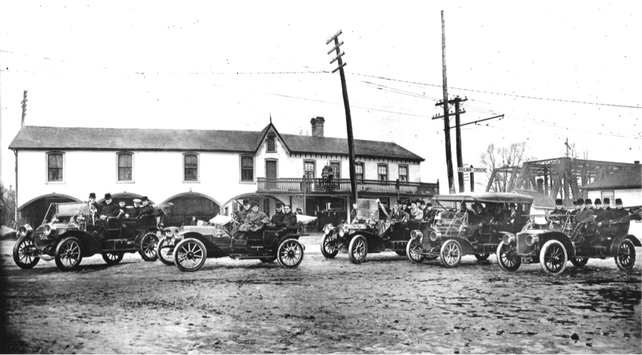 The Toronto Automobile Club visits the Humber Hotel, on the north side of Lake Shore Blvd. W. in Humber Bay, ca. 1903 (Courtesy: Eaton Archives)
Today, 1.2 million cars are registered in Toronto, and these cars can travel on 5617 Km of roads, all paved.  But in 1903, Toronto had only 178 registered cars, and a mere 260 miles of roads, with only 30 miles paved.  Cars were still a relatively new phenomenon, and a luxury that only the rich could afford.

The Toronto Automobile Club, a forerunner to the CAA, was established in 1903 by a group of men from Toronto’s elite, including John Craig Eaton.  Outings to explore the countryside became a popular “sport” in high society circles, and this photo portrays one such excursion to the Humber Bay area of Etobicoke.  Mr. Eaton is driving the second car from the left. The cars are stopped, facing west, on what is now Lake Shore Blvd. W.  The road’s muddy conditions ably demonstrate why road improvement was one of the auto club’s main goals.

The white stucco building behind the cars was built by John McDowell in the 1850s as the Royal Oak Inn, named after a great old oak tree around which he erected the Inn’s verandah.  He died soon after the hotel opened, and his wife, Margaret, became the innkeeper, followed by their son, William.  When William died in 1877, the inn was sold to Octavius Hicks, a man of many talents who I will tell you about in a later column. A subsequent owner changed the inn’s name to the Humber Hotel and, by 1903, Kenneth Huff was the proprietor.

Behind Dobie’s car you can see a “Railway Crossing” sign, alerting the public to the single-track of the Toronto and Mimico Electric Railway, a streetcar line that had operated along the north side of the road since 1892.  The trestle bridges that you see to the right of the hotel carried the Grand Trunk Railway over the Humber River and ran immediately behind the hotel.
​
Other goals of the Toronto Automobile Club were to build more roads, and to increase the speed limit from eight to ten miles per hour.  Perhaps their members would be pleased to see this same view today, with cars whizzing by on six lanes of the Gardiner Expressway and four on/off lanes for Lake Shore Blvd. W., all at speeds well in excess of ten miles per hour!