If you drive along Finch Av. W. between Islington and Kipling Avenues, the concrete wall on the north side of the road completely blocks your view of a beautiful property with a unique history that lies beyond.  But if you drive north of Finch on Kipling, turn right at the second street, and enter the driveway at the end of the road, you’re in for a surprise!  Welcome to 51 Panorama Court, the property of the Thistletown Regional Centre for Children and Adolescents, a site that began its story in 1927 as the “Country Branch” of the Hospital for Sick Children.

As early as 1921, the Hospital for Sick Children in downtown Toronto started discussing the possibility of building a convalescent hospital in the country to replace their Lakeside Home for Little Children at Hanlan’s Point.  The Lakeside Home could only be used four months of the year, and there were access issues for both staff and patients because of its island location. In addition, overcrowding at their main site on University Avenue had become a major issue.  They undertook a two year search for the right site for their new rural branch location.  In 1925, the hospital board and staff selected this property in Thistletown and purchased an 80 acre farm from Francis and Arabella Kingdon.  In 1927, they bought another 10 acres of land to the south from Henry and Elizabeth Barker.

The architectural firm of Sproatt & Rolph was hired to design the new hospital and oversee its construction.  Henry Sproatt and Ernest Ross Rolph formed a partnership in 1899 that became one of the most important architectural firms in Canada, lasting until Sproatt’s death in 1934. They collaborated on many of the most renowned landmarks in Canadian architecture.  Sproatt handled most of the design work, while Rolph handled administration, sales and construction management. Examples of their work can be found across Canada, but this property is the only known example in Etobicoke.  A few examples in Toronto include: Hart House at U of T; Canada Life Assurance Company; Imperial Bank of Canada;  Canada Permanent building; Royal York Hotel; and Eaton’s College Street.

The building they designed for Sick Children’s Hospital is an excellent example of Modern Classical architecture.  This style developed in the 1920s to achieve a simplified, modern look within a framework that still accepted a classical tradition.  It expressed volume, rather than mass, by reducing both form and classical decoration to bare essentials.  Through the 1920s and 1930s, this restrained style became widely used for corporate, industrial and government buildings.

This hospital consists of three wings with an H-shaped footprint.  It has a flat roof and is faced in brown brick. The main north side is symmetrical and formal in appearance. The first and second storeys have tall, paired, flat-topped, sash windows with transoms that run across the facade.  In the third storey are smaller sash windows in triads.  All windows have pared-down classical decoration.  A stone course connects the first floor window sills and a heavier stone course connects the third floor sills.  A heavy projecting cornice runs immediately above the third storey windows.  All of these elements serve to emphasize the horizontal, thereby streamlining the building’s appearance. 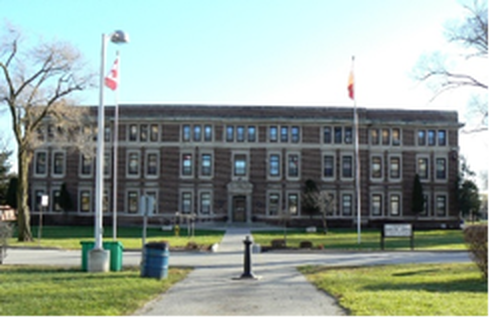 Main Building, North Face, 2011. Photo by Denise Harris.
The main entrance door is quite unimposing, but is in keeping with the scale of the main floor windows. Its decorative elements provide the building with its main classical notes. Two simplified Doric columns flank the plain wooden door. They are topped with a projecting cornice under a broken pediment consisting of two curving forms that frame a central urn. 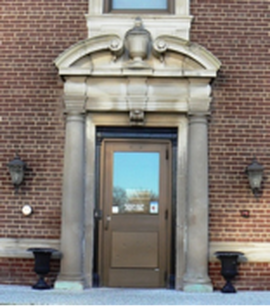 Main Entrance Door 2011. Photo by Denise Harris
The modern classical theme continues in the south wing, which dedicated the entire southern exposure for patient wards. It had outdoor sleeping porches on both the first and second floors.  On the first floor, large sash windows are grouped in triads, each triad divided from the next by a wide, fluted Doric pilaster. The second storey balcony is enclosed with wrought iron bars to ensure the children’s safety.

This new branch of the Hospital for Sick Children was officially opened on October 24, 1928.  John Ross Robertson, owner of the Toronto Telegram and  philan-thropist, along with members of his Toronto Automobile Club, picked up 44 children at the Toronto Islands ferry dock and transported them to the new hospital in a celebratory “parade”. 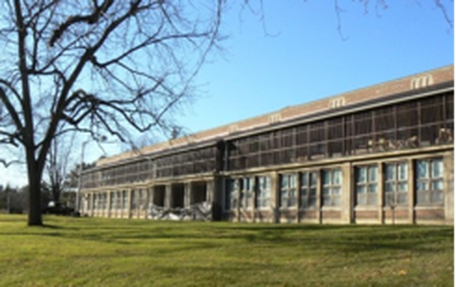 Main Building, South Face, 2011 – Photo by Denise Harris.
The new hospital was described as a “Palace of Sunshine”, custom-designed for children requiring helio (sun) therapy or hospitalization for long periods, e.g. while recovering from rheumatic fever, osteomyelitis, polio or surgery.  The building accommodated 112 patients in rooms with 6 to 8 cots that could all be wheeled outside in nice weather. At that time, sun and fresh air were considered necessary treatments for certain ailments. Because a natural environment was considered healthful for their patients, 50,000 tree seedlings and extensive gardens were planted on the grounds. 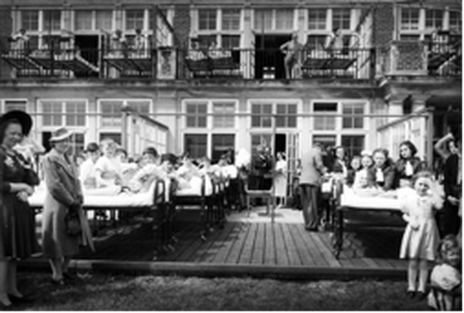 South Face with Sleeping Porches – Photo from Sick Children’s Hospital Archives.
The site was self sufficient, with its own steam plant, water filtration system and sewage disposal system.  A bus was purchased for $3,300 to connect the hospital to the nearest transportation lines and help make this “remote” location more attractive to staff.

With medical advances, including vaccinations, antibiotics and surgical techniques, the need for this type of hospital diminished over time. By the 1940s, it was being used primarily for polio cases.  After a major power failure in 1954 during Hurricane Hazel when 17 babies in incubators had to be evacuated, the decision was made to close the facility.

In 1957, the property was sold to the Ontario Government to become an “Ontario Hospital” for children - the first residential mental health centre for children and youths in Ontario.  Dr. Mackinnon Phillips, Minister of Health, optimistically predicted, “It is possible we will be able to cure almost all psychotic children.” The facility could accommodate 72 children, aged six to seventeen. Few staff members had experience working with emotionally disturbed children, and by the time the hospital opened in January 1958, the new staff had received little training. In addition, the target population had not been well-defined, and the first group included those with schizophrenia, brain damage, deafness, and developmental delays.  This first cohort of children literally destroyed the place by breaking windows and burning mattresses. Workers were attacked.  Staff largely learned as they went, and after a period of major adjustment, order was brought to the facility and an era of effective treatment began.

In the 1960s, a new insight in child psychiatry was the revelation that experiencing a positive group living situation - even with people to whom a child was not related - could be healing to a child who previously had never lived in a “normal” family environment.  In 1972, Thistletown Centre constructed ten small houses on the property, and moved many of the children out of a “hospital” setting into these cottages where they could experience living in family-style groups.  These cottages are still used today and are located south and west of the main building.

East of the main building is Etobicoke-Humber School, which is part of the Toronto District School Board and serves students who require that their educational needs be met outside of the regular school system. With highly trained teachers who work with up to 35 different outside agencies, programs are designed to meet the unique needs of students from four to nineteen years of age.

To-day, Thistletown Regional Centre defines itself as “a directly operated children’s mental health centre which offers specialized services and community supports to those children, youth, and families with complex mental health, behavioural or developmental challenges or who have experienced sexual abuse.”

Over the years, the property’s land area has been reduced from 90 to 36 acres. The 50,000 seedlings planted in 1928 have created a beautiful park-like setting, and there are public paths through the grounds where all are welcome.

This beautiful and unique property was listed on the City of Toronto's Heritage Register on May 8, 2014.