A look back at the history of just one building can often uncover many stories about the past, and a large frame structure that once stood on the west bank of the Humber River, at the east end of today’s Glenaden Avenue East, is certainly such a building.

Francis Cornish was born in England in1821 and immigrated to Canada prior to 1852.  He worked as a blacksmith in the Humber Bay area of etobicoke.  In 1861, he married Eleonore Droulette from Quebec and they eventually had seven children: three daughters and four sons. In the 1871 census, Francis began to list his occupation as farmer instead of blacksmith. In 1874, he bought a 38.5 acre lot from J.D. Evans, located between today’s Prince Edward Drive South and the Humber River.

This property had once been slightly larger, but in 1873 Evans had sold barrister Thomas A. Keefer a 4.8 acre piece of the land adjacent to the Humber River where there was a high, steep drop down to the water. In 1874, Keefer transferred ownership of this small lot to the Humber Stone Quarry Company, a newly formed corporation in which Keefer was involved. This company quarried the hill beside the river to harvest stone that was in great demand in Toronto as a building material, especially for high-end homes. After the stone was quarried, it was loaded directly onto flat-bottomed barges in the river and towed to downtown Toronto by a small steam tugboat named “Hetty Hoyt.”  The company built a stable for the horses that they used to haul away waste material and installed a forge to mend tools. An article in The Globe newspaper stated that a blacksmith “was kept on hand for the purpose.” It is reasonable to suspect that Francis Cornish, who lived so close, may have been a part time blacksmith at this forge.

Initially thirty men were employed at the quarry and the owners erected shanties where the men were provided with room and board.  When they needed additional living quarters, the company added a second floor to the stable and divided it into nine dormitory-style bedrooms. The company harvested stone from the Humber River bank until the early 1890s.

Francis Cornish died about 1882 and the farm passed to his eldest son, Francis Jr., who soon sold it to another brother, Frederick. Meanwhile their youngest brother, Henry, had married Agnes Johnson in 1895 and they were market gardening in Lambton Mills.  When Agnes died of vascular heart disease in 1909, Henry - more commonly called Harry – bought the home farm from Frederick and moved back there in 1910.  By then, the Humber Stone Quarry Co. was no longer operating, so in 1911, Harry bought the 4.8 acre piece of land where the quarry had been located, including the building that had housed the stable and dormitories.

The 1911 census shows Harry as a widower living on his property and owning a “refreshment booth.” A Margaret Johnston is listed in the same household, age 19, working in this refreshment booth.  On October 14, 1911, Harry and Margaret were married.
Harry’s new refreshment business in the former stable/dormitory was officially named the Wanita Tea Rooms, although a later sign on the building called it the Wanita Tea Garden, possibly borrowing the “tea garden” idea from the Old Mill Tea Garden that had opened north of Bloor Street in 1914.  “The Wanita” was a venue where people could have a bite to eat, enjoy a few drinks, and dance in the “open air.” The nine former bedrooms on the second floor became the “tea rooms.” 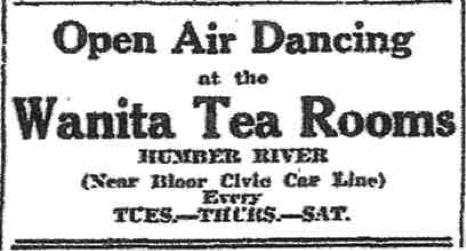 Wanita Tea Rooms ad in the Toronto Star, June 11, 1921.
Access to the Wanita from the west was challenging because of the steep hill that led down to the river level. Undeterred, Harry offered his guests access by means of what he called “the shortest ferry in Canada.”  When the above ad was published, it was common for couples to walk about one kilometre down the east side of the river from the streetcar stop at Bloor and Jane Streets, call across to the Wanita, and be transported across the river in a rowboat sent to pick them up.

Over the years, many rumours circulated about the “not-so-secret secrets” of the Wanita Tea Rooms. Its location was quite isolated, and many believed that this isolation facilitated illicit activities. Prohibition started in Ontario in 1916, and that year a patron named Joseph Donohue drowned in the Humber River at 1:00 am when he fell from his canoe after an evening at the Wanita.  There were accusations that he had been sold “bad squirrel whiskey” or moonshine in one of the tea rooms. (Squirrel whisky was so named because it reportedly made you “go squirrely and try to climb trees.”) The inquest results were inconclusive due to conflicting testimonies and recanted statements.

Throughout prohibition, cases of alcohol were being smuggled into Toronto from Montreal in tea caddies, and the term “tea room” was shadowed by connotations of clandestine liquor consumption and bootlegging. Other indications of the type of business conducted in the Wanita were the first hand reports that the top of the grand piano on the main floor was covered with tiny horseshoe-like impressions in the wood, made by the high heels of women dancing on its surface.

It appears that the Wanita Tea Rooms operated until 1921 when their last ad was published in a newspaper (see above.)  In the 1921 census, Harry was listed as a chicken farmer, and in a 1922 city directory, he was shown as a market gardener.

Meanwhile, back in 1915, William “Bill” Hicks of Humber Bay had opened a boat livery business adjacent to the Old Mill ruin just north of Bloor Street. He was the eldest of the nine sons of Octavius and Hannah Hicks.  The Hicks had lived in Humber Bay since ca. 1873, and descendants built and rented boats on the Humber River until 1955. Bill’s boat house by the Old Mill faced onto the former tailrace, and people would rent canoes or rowboats to travel down the tailrace and into the main part of the Humber River.  By 1925, however, the water level in the tailrace had dropped so low that Bill’s boat livery business was no longer viable at that location.  Their properties were heavily mortgaged.  In 1863, the mortgagees foreclosed, resulting in the sale of all five Ward properties to other parties by 1864. 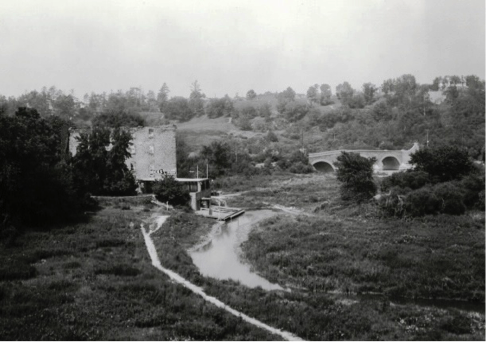 Bill Hicks’ boat livery business in the small structure in front of the Old Mill ruin, facing the former tailrace, in 1925. Note the low water level in the tailrace (Courtesy: TPL)
In 1925, Bill decided to move his business to a location where it would connect more directly to the river itself.  He bought a quarter acre piece of property half a mile further south from Harry and Margaret Cornish.  This lot included the former Wanita Tea Rooms building, which he turned into his new boat livery location. From then on, Bill always referred to this building as “The Wanita.” 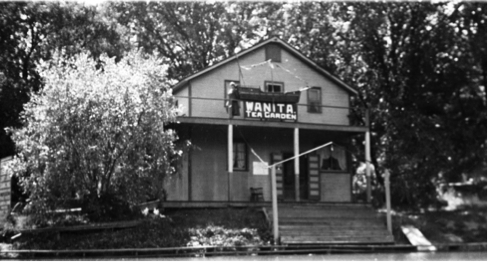 Bill Hicks’ Boat Livery shortly after he took possession in 1925. The Wanita Tea Garden sign is still up, but on top of it is a galleon from a water merry-go-round called “The Flotilla”, invented by Bill’s father, Octavius Hicks, and used in several Toronto parks.(Courtesy: John Hicks)
In 1937, Bill hired Lena Langford to be his housekeeper. Recently widowed, she moved into the Wanita building with her three children. After that Lena never left Bill’s side, becoming his business manager and, in 1954, his wife.  Lena had been born in Scotland, and trained as a “Florence Nightingale Nurse” in London, England.  She received medals for her service during World War I.

Lena and Bill made a great team, and became known as “Ma” and “Pappy” to thousands of children who came from the Central Y and other downtown centres to day camps held at Hicks’ boat house.  Here the children learned to swim or paddle a canoe.  Many of them would return as they grew up, bringing their spouses and children to see this magic place they had visited as children.   Bill was proud of his stringent boating safety rules, and no one ever drowned off any of his boats.
​
During World War II, Bill and Lena also opened their doors to over 100 British sailors and airmen who were temporarily in Canada for training and awaiting the call to return to Europe.  They helped the men send parcels home to their families.  Three sailors were sent by the Red Cross for a weekend to aid their mental health.  The sailors found the environment so restorative that they stayed for 18 weeks. One of them returned later to become a permanent resident and work at the boat house. 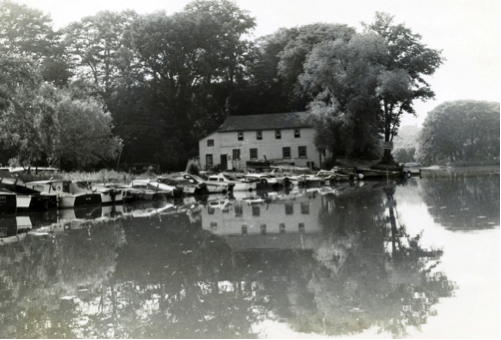 A still morning at Bill Hicks’ boat house in the former Wanita Tea Rooms building, west side of Humber River at Glenaden Av. E. in 1950. Note the high hill north of the Wanita where the Humber Stone Quarry Co. once harvested stone. (Courtesy: John Hicks)
​During Hurricane Hazel in 1954, the Humber flood waters rose to four feet above the kitchen ceiling, causing considerable damage. Bill and Lena had experienced floods in the Humber before, but this time the blow was unprecedented in its severity.  In addition, Bill was now in poor health, and so they decided to retire. 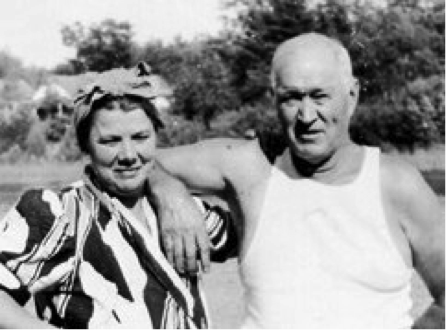 Bill sold his beloved property to the newly-formed Toronto Humber Yacht Club in 1955, happy that he was turning it over to a non-commercial group that would keep his “traditions in trust.” He and Lena moved to a house near Dundas St. W. and Etobicoke Creek. In 1966, the energetic Lena started working again, operating a 50 boat marina in Marie Curtis Park at the mouth of Etobicoke Creek. Bill passed away in 1958 at the age of 83. 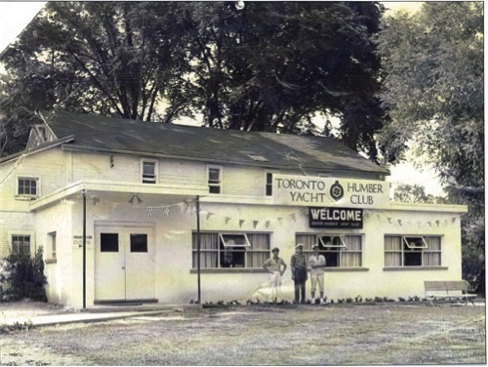 In 1966, the yacht club decided to move their records from a member’s home into the clubhouse.  Sadly, after hours on the day the records were moved, the clubhouse was destroyed by fire.  The club immediately rebuilt, erecting the new clubhouse with a different orientation, but still overlapping part of the footprint of the original building. Today most of the swamp has been replaced by park land, and the club house can be easily accessed by a paved driveway off Riverwood Parkway.

But sadly, that 1966 fire meant the end of an old frame building that had served many people in diverse ways for over 92 years.

References available from author on request.  Originally published in the Aldernews, the newsletter of the Etobicoke Historical Society.
View More Places