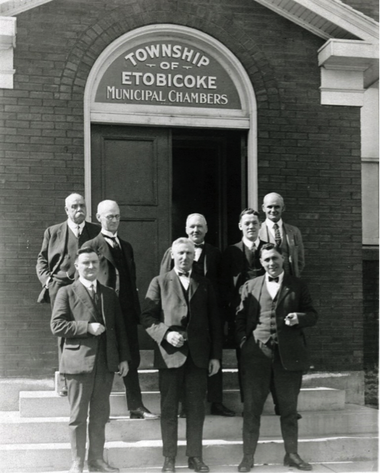 Etobicoke’s Council in 1926 on the front steps of the Township Hall. Treasurer John Berry is in the back row at the far left with his distinctive walrus-style mustache. Montgomery’s Inn Museum/Photo
John Roberts Berry became the treasurer for the Township of Etobicoke in 1918, but he was actually a textile miller by trade. He immigrated to Canada in 1880 and worked at Dominion Woollens in Hespeler, Ontario where he met and married Frances Traplin, daughter of mill worker John Traplin and his wife Eliza.

The Berrys rented a house on Fisher’s Road (now Kingsway Crescent.) The Traplins bought a lot and in 1892 built the house that is 125 Kingsway Crescent today in a popular Ontario Gothic cottage style.

The family returned to Lambton Mills in 1914 and everyone moved into Eliza Traplin’s house at 125 Kingsway Crescent. Eliza soon transferred ownership of the house to her daughter, Frances.

In 1918, Berry was hired as treasurer for the Township of Etobicoke. Until the township hall on Dundas Street in Islington was enlarged in 1922, Berry worked in a parlour on the main floor of his home.

Isabel Dodge, Berry’s granddaughter, was born in the house in 1923 and has fond memories of her grandfather. Isabel called him a true “English gentleman”.  He was known for his distinctive walrus-style moustache. In the summer he always wore a pansy in his lapel, picked from his own garden every morning. He walked to and from work in Islington every day, regardless of weather, and never owned a car. When he arrived home, it was Isabel’s job to replace his shoes with slippers while he sat on the front verandah smoking a cigar or pipe. The family attended St. George’s Anglican Church on-the-Hill and John played the organ every Sunday for many years. He also played the piano at home, often playing very loudly on Sunday mornings to wake up any laggard children.

Eliza Traplin passed away in 1928, followed by Berry’s wife Frances in 1934. Ownership of the house transferred to John Berry from his wife’s estate.

Berry was Etobicoke’s treasurer for 20 years, retiring in 1938 at the age of 80.  Reeve J. Armstrong commended him, saying that he, “...bore the heat and burden of the day for over 20 years, and his successor will find his shoes hard to fill.”

In 1946, Berry transferred ownership of the house to Isabel and her husband. Soon after, Berry moved into a nursing home where he passed away in 1951 at the age of 92.