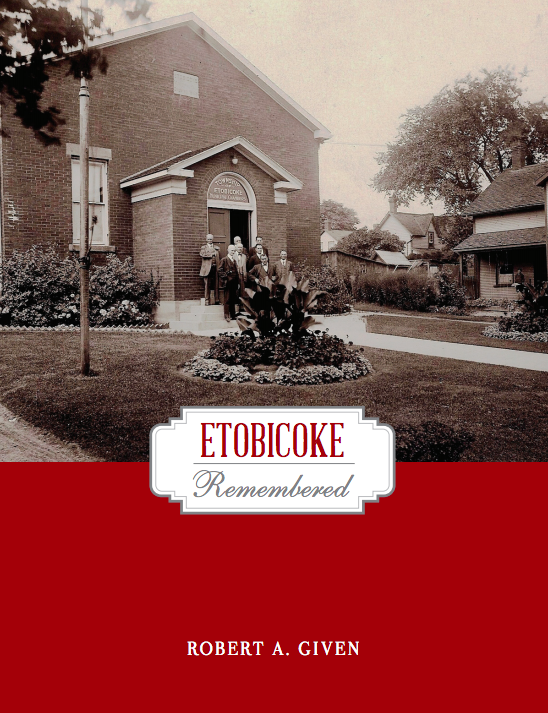 Etobicoke Remembered tells the story of how Etobicoke became, successively, a home for aboriginal peoples, a major trading route, an active mill centre, and a suburb that provided homes and jobs for a growing post-World War II population.

This meticulously researched and detailed history gives careful attention to 22 Etobicoke neighbourhoods, telling each one’s history through the years. Founding families, community leaders, and institutions are all explored. Robert A. Given’s deft touch and over 100 old photographs, drawings and maps will make you feel that you have gone back in time to touch the past. Given thanks his wife of over sixty years, Joyce, who typed the manuscript, and fellow-Etobian Molly Sutherland, who edited the book.

Add to Cart
About the Author:

Exploring Etobicoke’s history has been an all-consuming hobby for author Robert (Bob) A. Given for over 70 years.

Township of Etobicoke Municipal Chambers in 1927, on the north side of Dundas Street in the village of Islington.  The building was erected in 1843 as a Wesleyan Methodist Chapel with a roughcast stucco exterior. When the church moved to a new building in 1887, the chapel was sold to the Township for $700 and they had the exterior covered with brick. In 1957, the building became the District Police Headquarters.  Since 2000, it has been a Fox & Fiddle Restaurant at 4946 Dundas Street West. (Photo courtesy of Montgomery’s Inn).