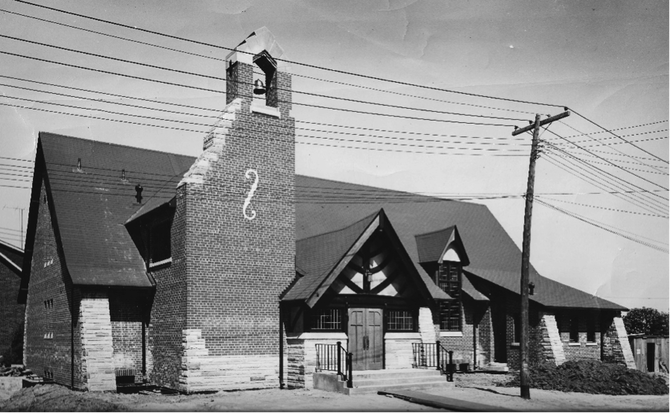 St. Andrew’s Presbyterian’s second church on the east side of Beamish Drive in Islington in 1952.
In early September 1922, James Beamish stopped by the home of his friend, David Streight, to ask how he would feel about starting a Presbyterian church in Islington. At that time, they were both attending Victoria Presbyterian in the Junction, which Streight had helped found.

With energy and enthusiasm, the work of organizing this new church began. The first church service was held on September 24th in Islington Public School on Canning (now Cordova) Avenue with 79 attendees. The first Sunday School was held there on November 5th with 37 “scholars” attending.

After meeting in the school for two years, they decided to build a church basement where services could be held. They bought land from Beamish at the corner of Bloor St. W. and Beamish Drive for $2100. On Sunday, December 24, 1924, their new $7,000 concrete block basement church was dedicated.

By 1948, church membership had reached 149 and the congregation planned the construction of a larger building on the site of the original. Their beautiful new Tudor Revival church opened on May 4, 1952. Modelled on St. Andrew’s Presbyterian Church in Tillsonburg, it is made of red brick with a steep gable roof that sweeps down to stone buttresses, with half-timbered dormers, and multi-paned glass windows. A massive tower holds the church bell. At the same time, in an almost unanimous vote, the church name was changed to St. Andrew’s Presbyterian Church, to be a constant reminder to parishioners to follow the example of the apostle Andrew.

Located in the heart of an expanding residential area, the congregation had grown to 460 members by 1960. In 1963, the church bought an adjacent lot to add a Christian Education wing. However, their plan required major changes to the existing building. For 41 years, members of the church had been sitting in pews that faced south. However, the new addition required the reversal of the pews to face north. To make the interior as functional as possible and increase space for the choir and a larger vestibule, they took the unusual step of completely reversing the sanctuary’s orientation 180 degrees. The new Christian Education wing opened in September, 1966.

On Sunday, October 29, 2017, St. Andrew’s Presbyterian Church is proudly celebrating its 95th anniversary! James Beamish and David Streight are recognized as two of the church’s founders on bronze plaques in the sanctuary. This anniversary is also an opportunity to recognize the hundreds of other individuals who have contributed to this church’s work through 95 years of upholding the faith of their forebears.