The Six Points Hotel and its service station were new when the photo below was taken in 1924. The establishment faced west on the point created by the intersection of Bloor St. W. on the right and Dundas St. W. on the left. The jitney bus at the far left was owned by Russell Fife who operated the Islington Bus Line between Keele St. and Six Points from 1924 to 1927.
​
The hotel was a well-known stop for travellers, buses, drivers, and anyone wanting to wet their whistle or grab a meal. Owner Louis Epstein operated a tea room in the bar during prohibition.
​
On January 11, 1945, Six Points Hotel was gutted by fire at 5:00 am, with a loss of $30,000. Owner Harry Fiuery escaped unharmed with his wife and two children. Only the hotel’s walls remained standing. 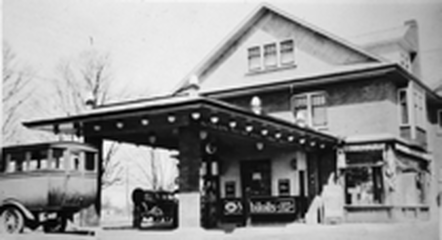 Six Points Hotel was rebuilt by Fiuery with a flat roof. The business closed and its assets were sold at auction in March, 1961 when a new Six Points cloverleaf was being built. ​
​
Researched and Written by Denise Harris
View More Places