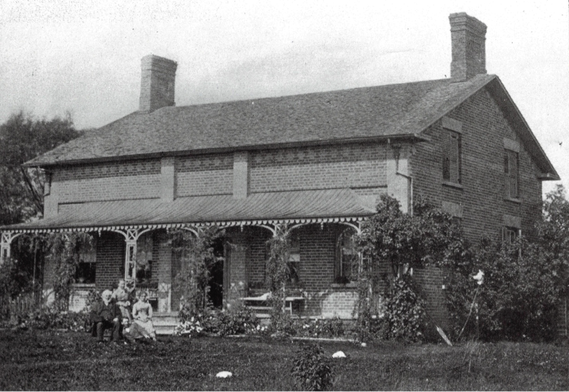 Peter and Esther Shaver’s house, “Applewood”, built in 1852 by architect William Tyrrell of Weston. The man with the white beard is Peter Shaver in the late 1880s. [Courtesy Montgomery’s Inn]
Today, many people know the historic house “Applewood” as the place where they or friends were married. Indeed, since 1982, this lovely old house has hosted over 12,000 weddings. However, fewer people know the long history of Applewood and how it was almost lost.

Peter Shaver arrived in Etobicoke from Ancaster in 1830 and acquired 200 ares of land on the west side of Highway 427, between Bloor Street and Rathburn Road. Initially Peter and his wife Esther lived with their seven children in a one-storey brick house on the northwest corner of today’s Burnhamthorpe Road and Highway 427. Peter was a successful farmer and when he was able to afford a new home, he hired Weston architect, William Tyrrell, to design and build it. Completed in 1852, the house is Georgian in style and is built of red and yellow brick with a picturesque verandah across the front.

In 1874, Applewood’s most famous resident, James Shaver Woodsworth, was born to Peter’s daughter, Esther Josephine, and her husband James Woodsworth. Later, James Jr. lived in Winnipeg and was elected MP in 1921, working tirelessly to implement social reforms. In 1932, he was the principal founder of the CCF (Co-operative Commonwealth Federation) political party, forerunner to today’s NDP.

Peter Shaver was a trustee of Islington Burying Ground on Dundas Street West where he and Esther, his brother George, and many other family members are buried.

After Peter’s death in 1890, Applewood was sold to Walter Shaver, his brother George’s grandson. Walter died in 1931, leaving his daughter Isabel 30 acres of land, including the house. Isabel sold off pieces of the land and donated one section for Broadacres Park. In the 1980s, Isabel and her husband Percy Bishop decided to sell the last 4 ½ acre piece where the house was located to a developer, but they wanted to preserve the house. Isabel and Percy moved out of Applewood on April 8, 1980, ending 150 years of continuous Shaver family ownership.

On September 25, 1980, the house was moved to its current location at 450 The West Mall in Broadacres Park. Multiple severe cracks developed in the brick structure during the move, and for awhile it looked as if the house could not be saved. However, with the help of a new contractor, a restoration was successfully completed and the house opened for its first event, a  Fall Fair, on October 3, 1981. Today, Applewood is open to the public from 10 am to 5 pm daily for self-guided tours... and for weddings, of course!