Searching for Oil and Natural Gas in Etobicoke 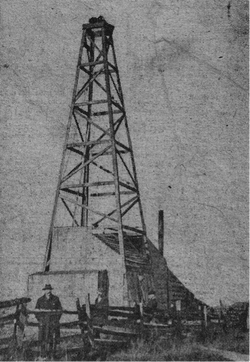 Searching for oil, natural gas and other valuable water near Dundas Street ca. 1900.
They planned to bore for oil, natural gas or other valuable water, and to lay mains and serve that part of Etobicoke which was then being subdivided by Joseph Barrett’s Mimico Real Estate and Securities Co. Ltd.  The area was generally known as Charles Northcote Farm and is now a north section of New Toronto. They were also granted permission to serve the proposed community with electricity, although they probably never intended to use that part of their franchise.

In November, 1892 they were given supplementary letters patent to extend their operations to the Township of Toronto and the Gore of Toronto on the west and to West Toronto Junction on the east.

There have been a number of references to finding oil and natural gas locally over the years.  The York County Atlas of 1878 shows an oil company located on the west side of Church Street or Royal York Road just south of the C.N.R. tracks in what became Mimico.
Miss Pearl Horner has recalled that her grandfather’s home between Beta and Gamma Streets in Alderwood was illuminated for many years by natural gas from a well on his own farm.  Fred S. Orpen reminded The Press that his father, Abe, opened the Long Branch Race Track on September 6, 1924, and an oil well which was on the property was not capped until about 10 years later, when it was no longer needed.

In 1888 some 57 acres were purchased on the south side of Lake Shore Road for an Ontario Hospital.  The Government drilled for water but found salty water and at the 425, 575 and 1052 foot levels natural gas was found. Water therefore was obtained from the lake.  When the Hospital opened in 1890, Ball Electric Light Co. facilities were used, although natural gas at 26 pounds pressure from the well was also utilized.

Samuel Rhodes Wood, yeoman of Islington, in April 1893 assigned the right to take, bore and mine for and gather all gases, oil, minerals and valuable water found during a 5-year period on 5 quarter acre locations selected by Hume Blake and approved by Sir William Mulock on the west side of Islington Avenue from about the C.P.R. tracks north to Bywood Drive. One of the said locations was to be where the New Toronto Oil and Natural Gas Co. Ltd. found mineral water.

Natural gas pockets were found at the turn of the century on the Price Farm north of Dundas at the Cooksville Creek and on the Bull Farm south of Dundas, west of Highway 10. A steady flow was never obtained. It was the habit later to throw a lighted match in the direction of an abandoned well to see if it would ignite.  As recently as May, 1954 Roy L. Killins drilled for oil on several farms between Churchville and Meadowvale.

The Consumers’ Gas Company of Toronto served its first Etobicoke customers with manufactured gas in 1924 when the Bloor Street bridge was opened over the Humber River.  Much of the gas which crossed the Humber at Bloor went to Mimico and the lakeshore area.

The Consumers’ Gas Company placed a main across the Humber at the Old Iron Bridge on Dundas in October, 1928 and replaced it with a main on the Dundas High Level Bridge when it opened in July, 1929.  A main was laid across the Humber on the Lake Shore Road bridge in August, 1931.

The Consumer’s Gas Company began providing Etobicoke homes with natural gas from Texas and Louisiana via Lewiston in November, 1954 when there were about 5,500 customers west of the Humber, and a new 12-inch grid service was being extended some 15 miles through Rexdale.

Researched and Written by James V. Salmon and Robert A. Given (Originally published in the Etobicoke Press, August 28, 1958)

(The “Etobicoke in Pictures” column appeared in the Etobicoke Press newspaper from 1954 to 1961.  Robert A. Given, EHS’s Historian Emeritus, researched the history and wrote the text for each column. James V. Salmon, a collector of photographs about Etobicoke, York Township and the West Toronto Junction, supplied a photograph for each column. A collection of about 100 of their columns is in the EHS archives. A few very minor edits have been made to the original for clarity only.)
View More Historic Events