Robert A. Given - 2008 Recipient of The Jean Hibbert Memorial Award 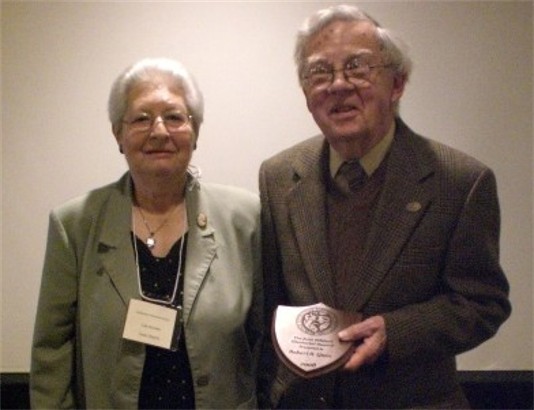 Joan Harris presenting the Jean Hibbert Memorial Award to Robert A. Given.
Robert, who is know to all of us Bob is receiving the Jean Hibbert Award for his long time interest in research, writing and long term valuable service to the Etobicoke Historical Society. Bob was one of the founding members of this Society, celebrating its 50th Anniversary this year 2008.

At the inaugural meeting held May 8th, 1958 Bob became the Societies Historian a position he has held ever since. It was Bob that had a co-worker at Eaton's create the Crest for the Society.

Bob Given's lifelong passion for history was sparked by Josephine Creech.  Her family had a small farm on Government Road since 1830, and gave Bob the chance to type Lambton Mills Women's Institute's "Tweedsmuir History" on his grandfathers Underwood typewriter some 70 years ago.

Bob's research and writing of THE STORY OF ETOBICOKE in 1950 was to commemorate the Centennial of the Incorporation of the Township of Etobicoke 1850 – 1950.  His book went into its second printing in 1973 requested by the Etobicoke Historical Society.

Bob had spent many years with the York Pioneers and Historical Society and was involved with the organizing group that formed the Etobicoke Historical Society led by Dorothy Hobbs, our late first President Frank Longstaff, along with Donald D. Gunn and E.W. "Joe" Anderson to name just a few.  Once underway, the Society had a list of 81 Charter Members.

Bob had a column in the Etobicoke Press for over 5 years from 1955 to 1960 on the history of Etobicoke.

Bob was named to Etobicoke's Hall of Fame in 1974 and his picture hangs outside the Council Chamber in the Etobicoke City Hall.

It was 15 years ago that the Etobicoke Historical Society had a contest to name their newsletter, it was Bob's submission of "Aldernews" that won out over the many names submitted to the Board of Directors.

The fire still burns brightly for Bob as his latest book ETOBICOKE REMEMBERED, a comprehensive volume on the history of Etobicoke from 25,000 years ago to present day.  It was during his research of the 50th anniversary of the Sunnylea School that Bob located the lady who submitted the winning name for the school, living near Collingwood thus allowing her to attend the school's anniversary celebrations. Researching and writing of Etobicoke's history proved an all-consuming hobby and a labour of love for Bob that span the last 15 years or as Joyce Given says, many years before that..

Bob exemplifies the heart and strength of research and writing.  Bob has made, and continues to make, a significant contribution
to the Etobicoke Historical Society and to the preservation of heritage in Etobicoke. 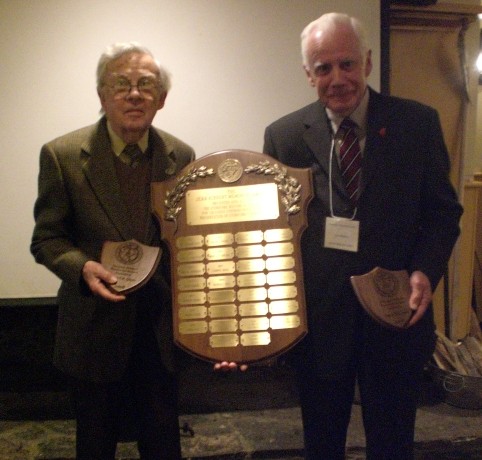