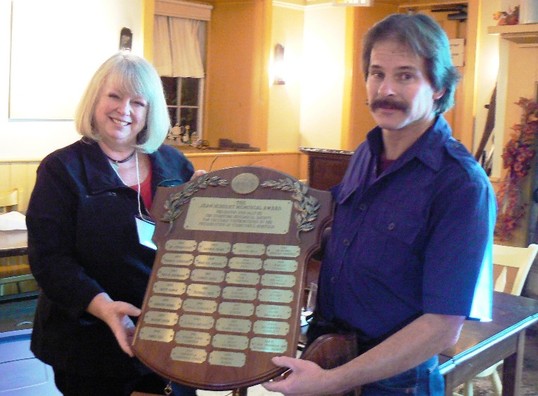 Paul is very passionate about preserving New Toronto's heritage to maintain its unique identity, but his passion also extends to the entire waterfront area. To say that he's involved with his community would be understatement:  he truly exemplifies what people mean when they talk about "grassroots movements"!  He works actively to save heritage properties in New Toronto and beyond, some recent examples being the Mimico firehall, the Featherstonhaugh Estate gardener's cottage, and the Ormsby/Franceschini Estate.

He is hands-on and proactive, writing letters to councillors and city departments, following up to ensure the promises of others are kept, and deputing at council meetings.  He has created e-mail distribution lists and uses them to mobilize people into action when needed, e.g. he prepared and distributed a document summarizing endangered heritage buildings across the lake shore area, informing people who to contact in the City to exp[ress their support for preservation.

Paul is a member of the Lakeshore Planning Council - a volunteer initiative by residents of the lakeshore area that was organized to work within the community in a revitalization effort.   At their 2010 conference on "How to Make a Great Community Even Better", Paul gave a presentation on the history of whole lake shore area.  Nine working sub-committees were created, including one for Heritage, which Paul now chairs.

Paul is not only very passionate about heritage, but also very knowlegeable. He does research to gather the facts and fully understand the issues in each situation, then shares the information with others, e.g. he interviewed half of New Toronto's retailers to get their opinions on the future use of the Birmingham industrial lands.  Paul also focuses on educating others, opening their eyes on importance of heritage, by leading walking tours, speaking to councillors, etc.  In addition, he has been collecting New Toronto artefacts, working towards a future New Toronto museum.

For all of these things and his passion at the local level, EHS is very please to present Paul Chomik with the Jean Hibbert Memorial Award for 2011 for an outstanding contribution to historical awareness and preservation in the former City of Etobicoke.
More Recipients